Twenty reasons to visit Oamaru, what to see & do — guide

Isn’t Oamaru just another small town between Christchurch and Dunedin? Why would I want to stop there? Who needs a theme park when New Zealand visitors have Oamaru? Genuine dyed in the wool heritage bottled and reimagined for visitors. Oamaru has curated the history of Oamaru New Zealand into quirky, fun encounters. You are not going to forget your visit in a hurry. Kids are welcome to clamber, jump and climb at Steampunk. The blue penguins will capture your heart as they waddle back to their nests in the evening, Oamaru is definitely worth a stopover.

Oamaru’s wealth is built on the refrigerated meat trade. In the 1880’s the new found wealth was heady with imposing buildings, made from locally quarried limestone rivalling Los Angeles for the population size and grandeur. Then it went effectively bankrupt, the town barely grew from the late 1890’s the town itself hardly grew after 1881. Its small hinterland – a triangle of farmland, no more than 35 km on each side (the Pacific Ocean, the Waitaki River and the Kakanui Mountains) – limited its development. Oamaru became a town where the young population left. The decline protected the Victorian facades and grand buildings as there was no interest or desire to knock them down for redevelopment.

The 1970’s saw the beginnings of an interest in marketing Oamaru’s distinctive street frontages along with the cute blue and yellow eyed little cuties adorable waddling penguins for Oamaru stoically trudging up and down the beach, as regular as clockwork

Year round Oamaru Weather Forecast and Observations
1
Victorian Precinct performed by the All Blacks chant origins are a stone’s throw away.

Victorian Precinct with its quirky shops, galleries, traditional artisan crafts Traditional Crafts such as book binding, and cooperative craft guilds Crafted Waitaki. A stroll into history with nooks and crannies supporting small artisan pop up ventures and eccentric interiors inviting you to check out exactly what it was you thought you saw. 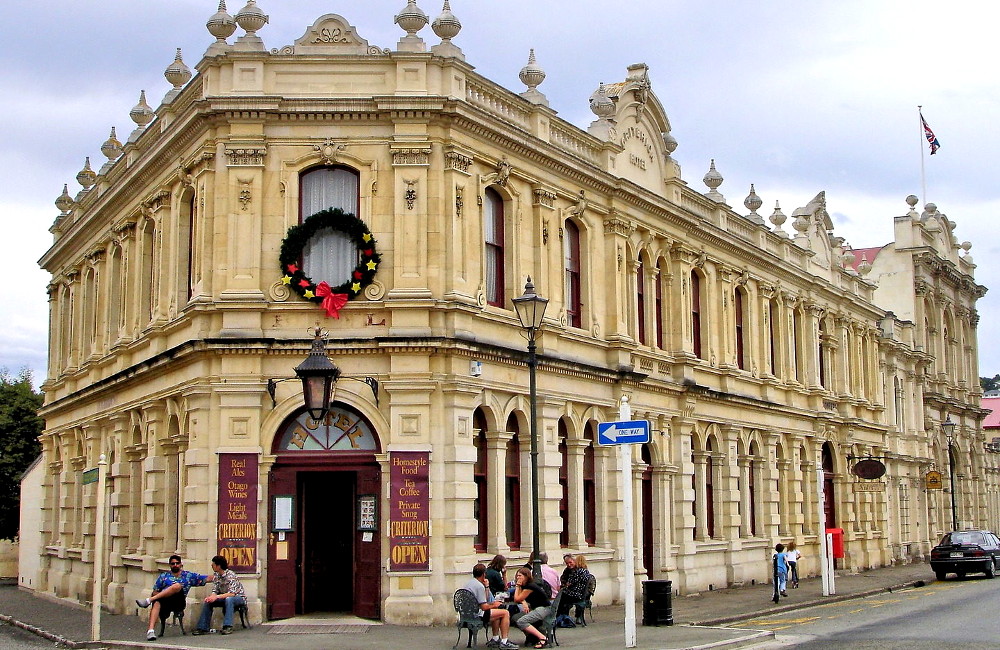 Steampunk HQ museum is a museum where you are encouraged to climb, jump and turn levers on and off. It’s fantasy and surreal with imagination defining the style and materials of the exhibits, the gallery and the contraptions both inside and outside. It is a perfect rainy day place to visit. Steampunk is a marriage between Victoriana and science fiction. Throw elaborate detail, bustles, copper, crystal, dark corners and highly detailed knobs, levers, taps, and screws.  Steampunk has an eye for a functional machine; spluttering and trudging down the street with a sauve swell in a top hat as the driver. An annual Steampunk Festival is a show stopper, parasol duelling with sharpened edges, teapot racing and a fashion show are just some of the events organised. Oamaru is the centre of New Zealand for Penny, or Ordinary Cycles as they are officially called. You can also check out the Ordinary Cycle Club who love to venture out on their Penny Farthings. 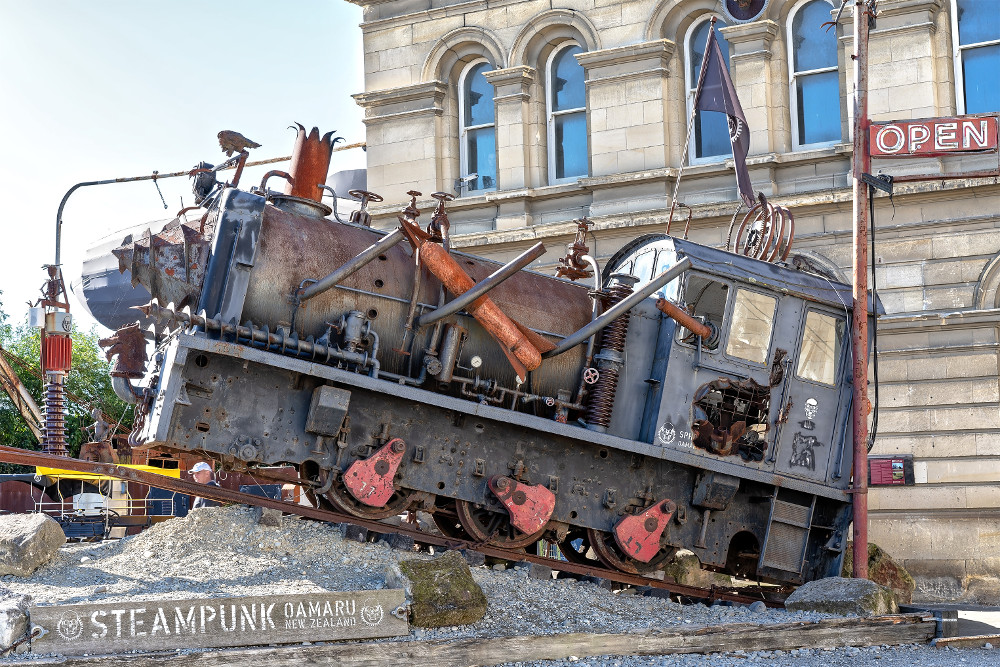 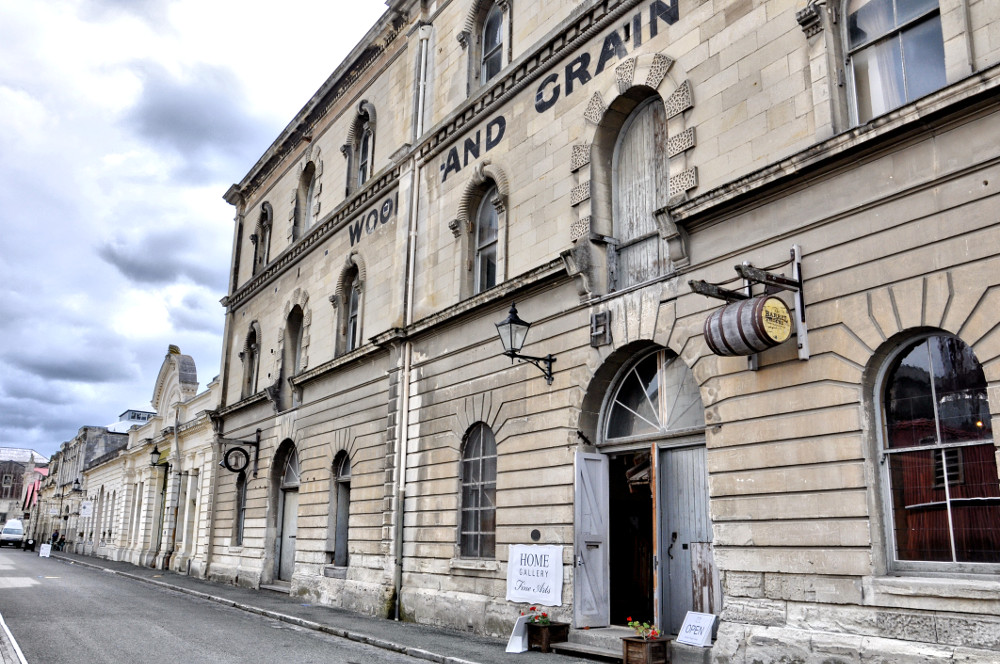 Ride the vintage train. The train operates every Sunday and for special events – for example Victorian weekend, around Christmas and the New Year. The train is managed by a volunteer group that runs vintage trains around Oamaru’s famous Victorian Precinct and harbour. Then there is the Oamaru Steam & Rail take you on a picturesque train ride along the clay cliffs of the Victorian Harbour where you’ll arrive at the Red Sheds. These are occupied by local artisans & crafts people. Here you can disembark to browse The Forrester Gallery. The building itself is an instagrammers favourite. 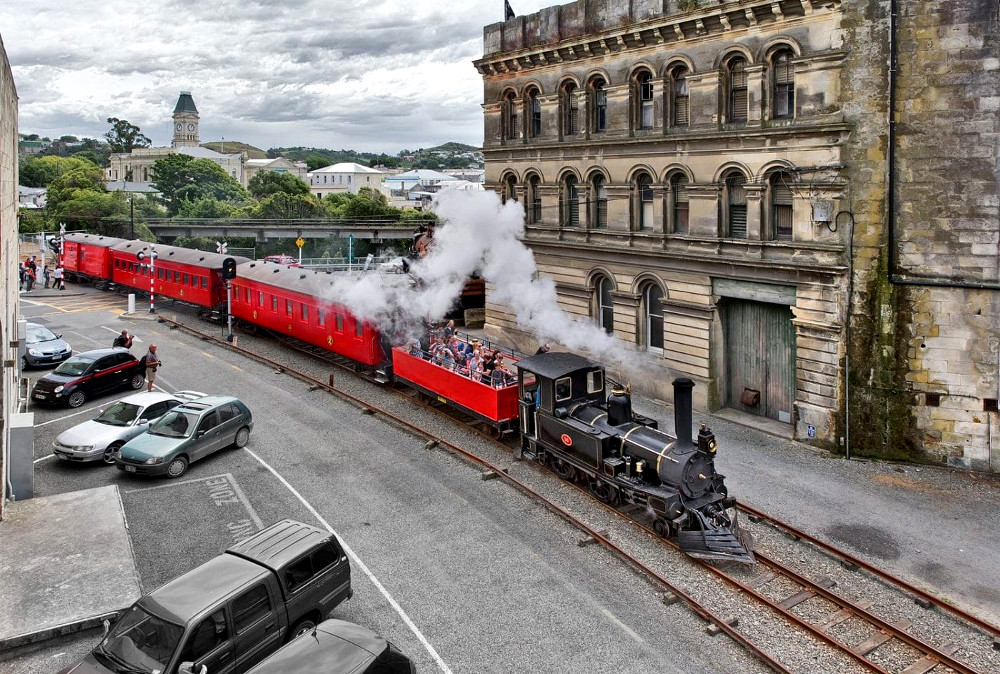 Just around the corner is Moeraki boulders, granite shaped and smoothed by eons of sea water movement. Nature’s sculpture is now a hot spot for instagrammers. Don’t let this discourage you from visiting in the half light of either sunrise or sunset. Magic made by nature is worth the visit. 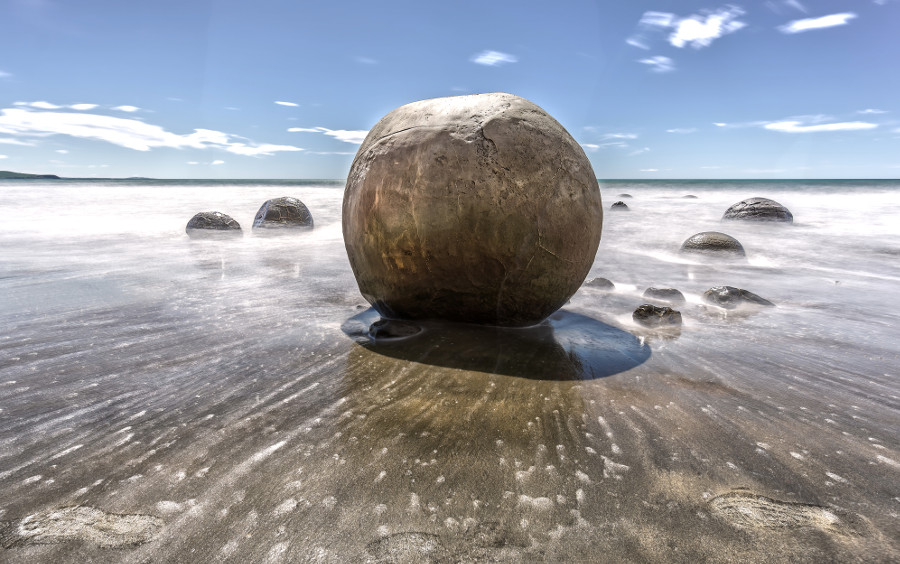 Go you high into the hills and enjoy a good workout on the Skyline Walk. Beginning at Fenwick Park, the 4.6 kilometre track is uphill most of the way, but your motivation is the panoramic view from the top. Tall pine trees, fantails, bellbirds and native forest make the walk scenic as well as challenging exercise. You will pass the Astronomical Society’s observatory. Art galleries such as The Forrester Gallery, located in the heritage Bank of New South Wales building has an art collection focused on regional works. 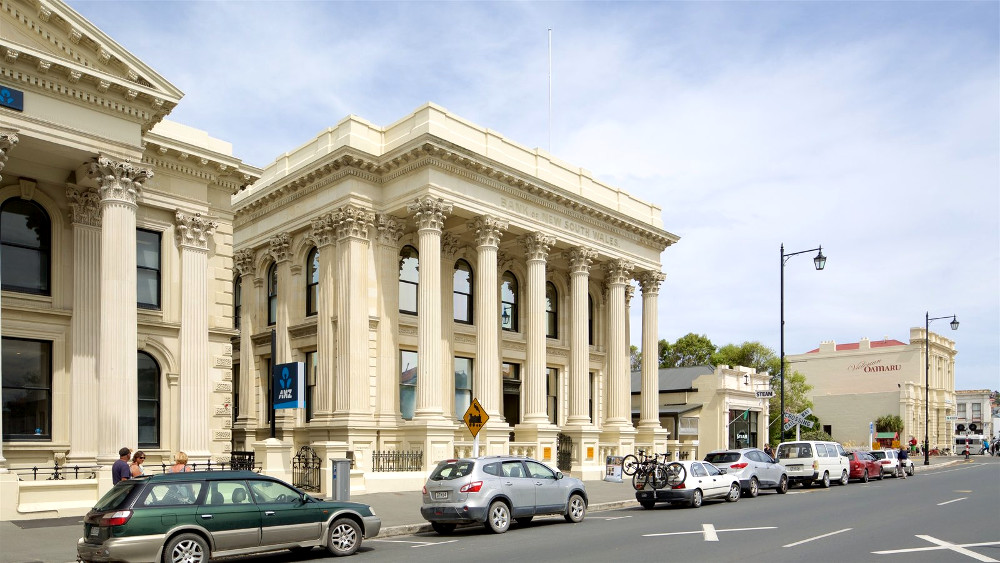 Magnificent garden of significance, a Victorian garden in all its fussy, boxed glory. The Fernery. A Victorian garden must do plant accessory is a fernery and Oamaru is a great example of the style and arrangement of a Victorian era Fernery. Then there is a band rounda, aviary and peacock house. The heritage trees are a massive height adding the garden’s majesty as Victoriana in all its planted glory. A perfect place for the Victorian heritage week tea parties. The main gates are classical statements of splendour circa 1876. Then Craig Foundation, Italian marble surrounded by formal beds welcomes you into the nineteenth century world of botanical wonders. Another feature is the Wonderland Statue donated to the children of Oamaru in 1926 by Robert Milligan, the statue is located in the Wonderland Garden. The summer house or conservatory is a popular place for romance. Look for original garden objects such as a sundial, croquet lawns and a wishing well. Our favourite is the peacock house. We can visualise those feathers in the ornate Victorian hats. 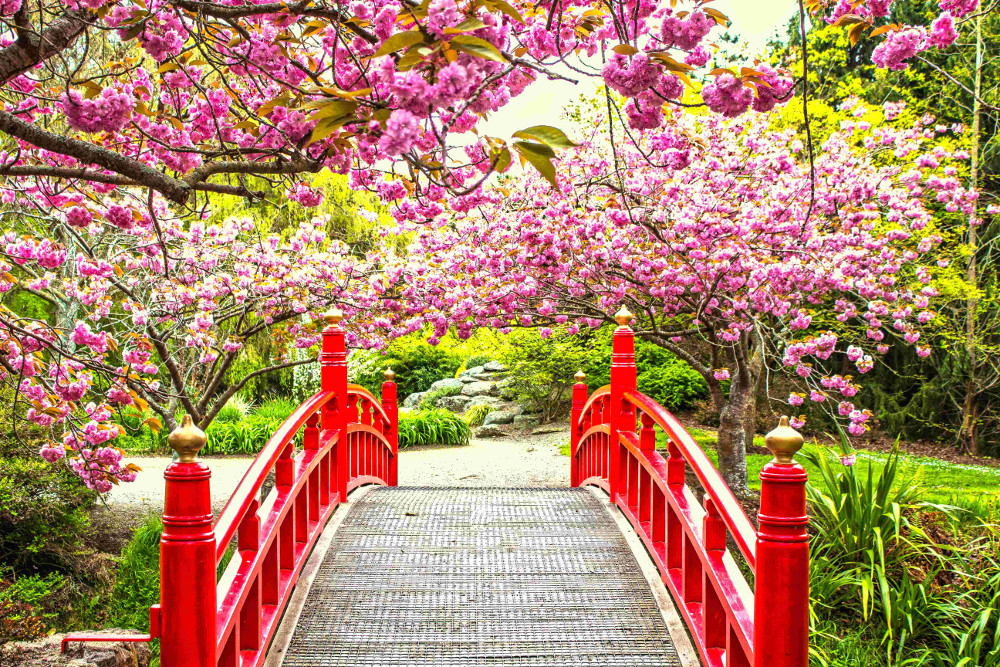 Penguins visit the Blue Penguin Colony. The blue penguin is the world’s smallest penguin. The Oamaru penguin colony has seating set up around the nesting site. You are welcome to watch the penguins return from the sea in groups with the setting sun. 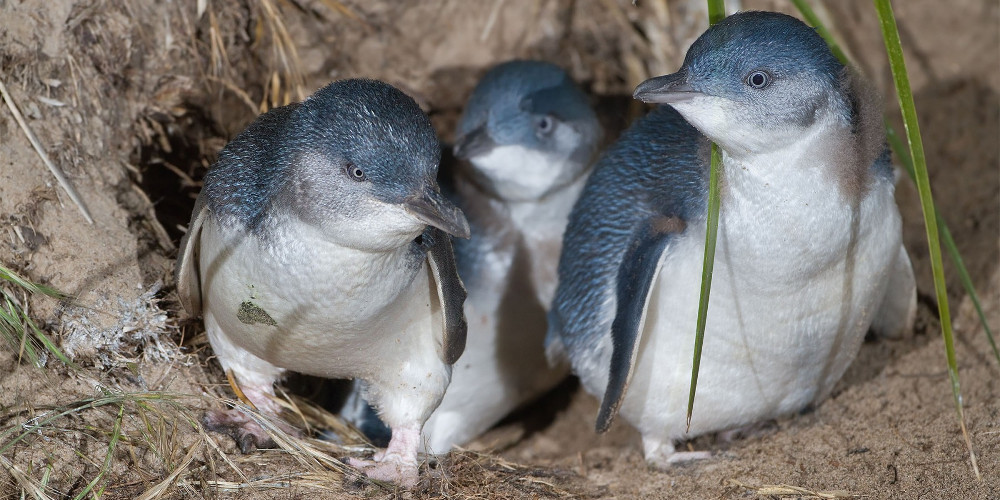 Bushy Beach Scenic Reserve: Places to go in Otago “The natural coastal vegetation at Bushy Beach Scenic Reserve is the last remaining in the area. Wind-sheared scrub, dominated by hebe, ngaio, mahoe and broadleaf, clings to the cliffs and shelters penguins, other seabirds and a variety of insects. A unique flora and fauna exists here – a number of native plants and insects are at either their southern or northern geographical limit. Yellow-eyed penguin/hoiho breed at Bushy Beach. Adult penguins return to feed their young at any time of the day. You can also regularly see New Zealand fur seals, with New Zealand sea lions and elephant seals occasional visitors to the beach. No dogs are allowed in the reserve. To avoid disturbing the yellow-eyed penguins/hoiho, keep off the beach between 3 pm and 9 am. Keep at least 20 m distance from marine wildlife. Bushy Beach is not only a fantastic photo opportunity with its long-stretching sandy beach backed with coastal forest, but it’s also another great place in Oamaru to spot some wildlife. Follow a 10-minute zig-zag track to the top of a cliff with some great viewing of a seal colony on the rocks below. Continue onwards to a viewing hide where you can watch yellow-eyed penguins on the beach (usually between 3pm and 9am). 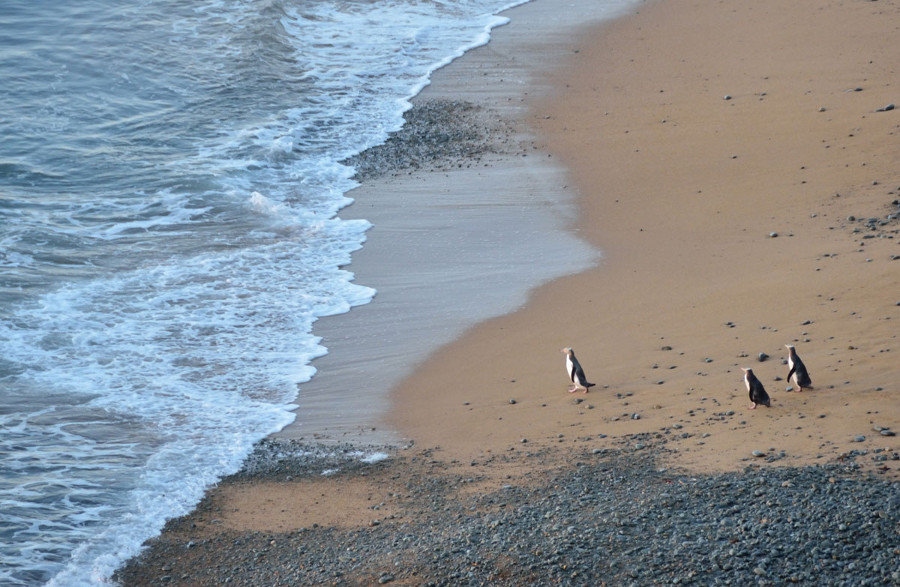 Oamaru’s marine life is preserved, protected and abundant. Little Blue Penguins, Yellow Eyed Penguins and New Zealand Fur Seals are frequent visitors to Oamaru shores with many returning to breed Yellow-eyed penguin Trust, Yellow-eyed Penguin Trust – Dunedin, New Zealand. Yellow-eyed penguins swim as far as 50 kilometres off-shore and dive up to 120 metres for their food which they find mainly near the seabed.Yellow-eyed penguins can be seen at Nugget Point Totāra Scenic Reserve (Roaring Bay) and Curio Bay –  please use the hide for viewing and stay off the beach. Supporting wildlife viewing means at least 4 metres from the wildlife and respecting their space. 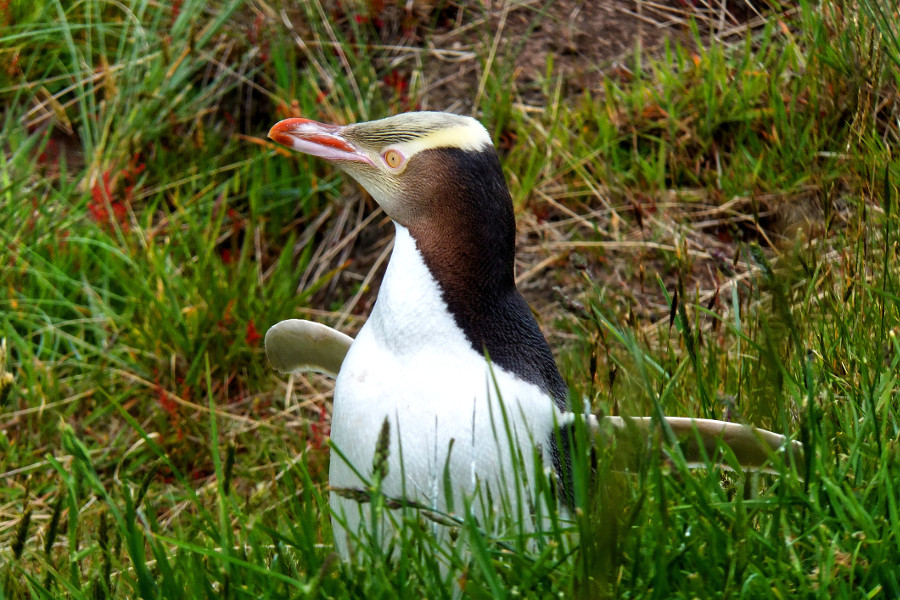 The Janet Frame House – 56 Eden St, Oamaru – The childhood home of Janet Frame from 1931 to 1943. New Zealand author is a book buffs must do destination with your trip organised around opening hours. Remember to check beforehand. 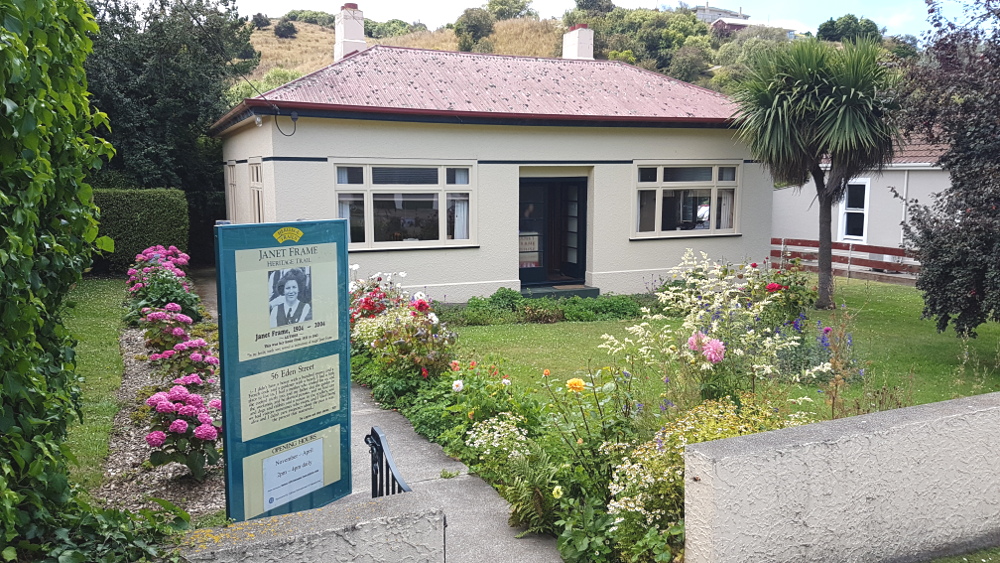 The Waitaki Museum collects artefacts and objects that tell the natural, cultural, agricultural and industrial stories of the Waitaki District: from early Maori occupation around the Waitaki River mouth, European settlement by whalers and run holders through to the discovery of gold and the wool and meat industries which led to the development of Oamaru as a significant port town. 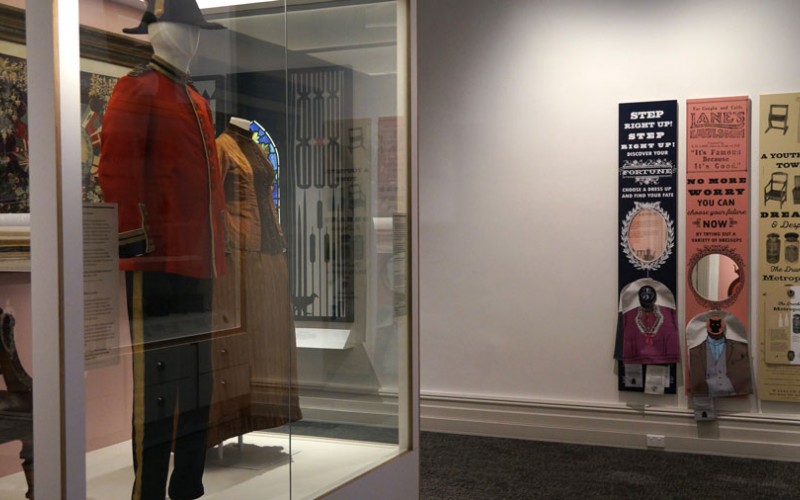 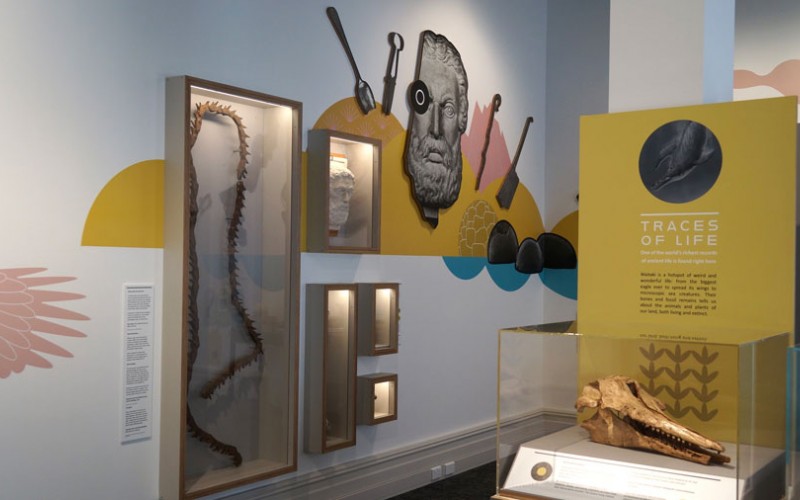 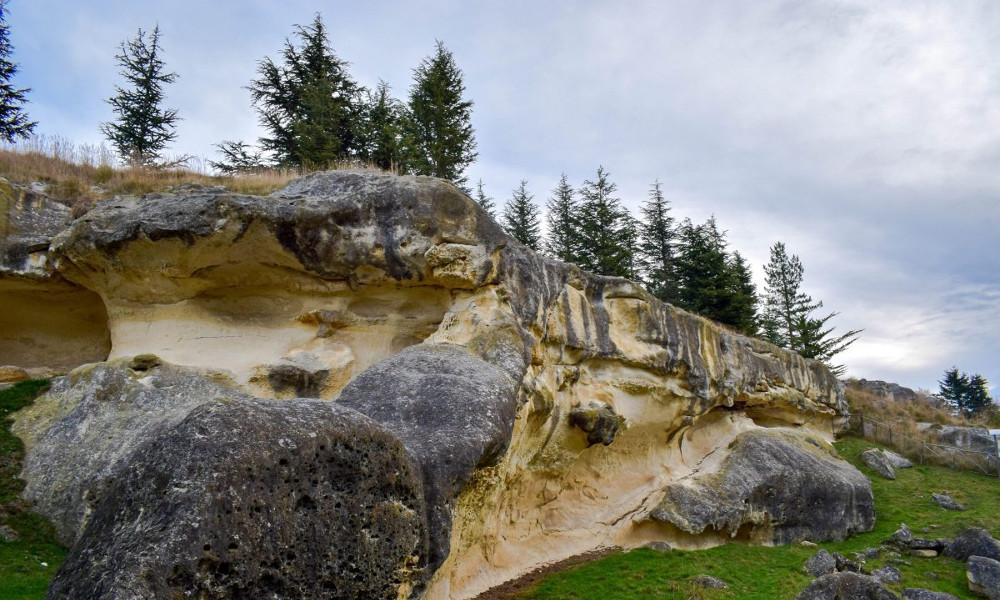 Foodie heaven with Whitestone Cheese and artisan food vendors. Tastings, factory tour to observe cheese making. Artisan Cheese, Oamaru, North Otago, New Zealand, it’s a great choice for a rainy day or something to do with kids.  Who doesn’t like to see liquid milk being heated, boiled, curdled and squeezed into the recognisable shape of cheese. 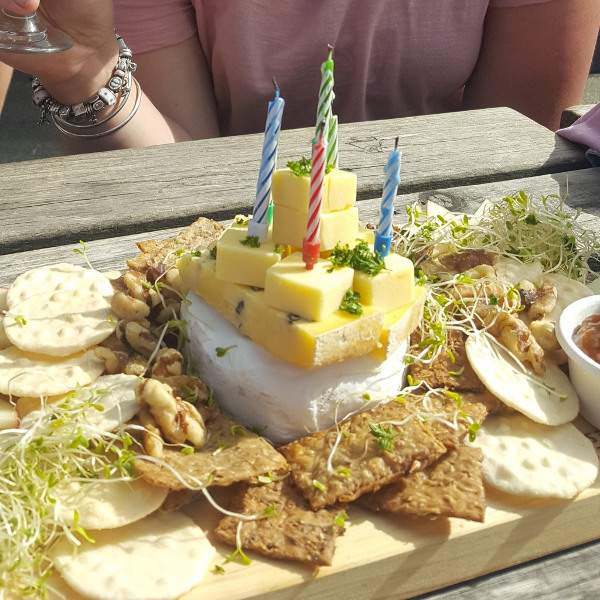 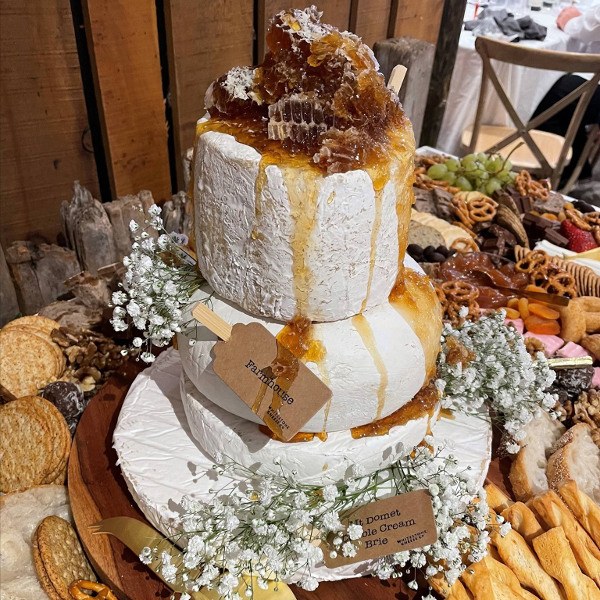 When British television chef and restaurateur Rick Stein was told he could choose to go anywhere in the world to write a travel article for English newspaper the Daily Mail, he chose Fleurs Place. Perched above the sea on stiles is a cafe specialising in fresh fish dishes. Moeraki is not just a boulders instagram moment it is lunch. Make sure to forward book as Fleurs is very popular with locals. Braided River Jet Boating. These tailormade braided river experiences will have your heart pumping with each turn or will have gazing out at wildlife that is unique to the braided river system. Each trip is tailor-made to your preferences. Choose from an adventure to the Waitaki Hydro-Dam, out toward the Pacific Ocean, or hours of sight-seeing and maybe a bit of fishing. 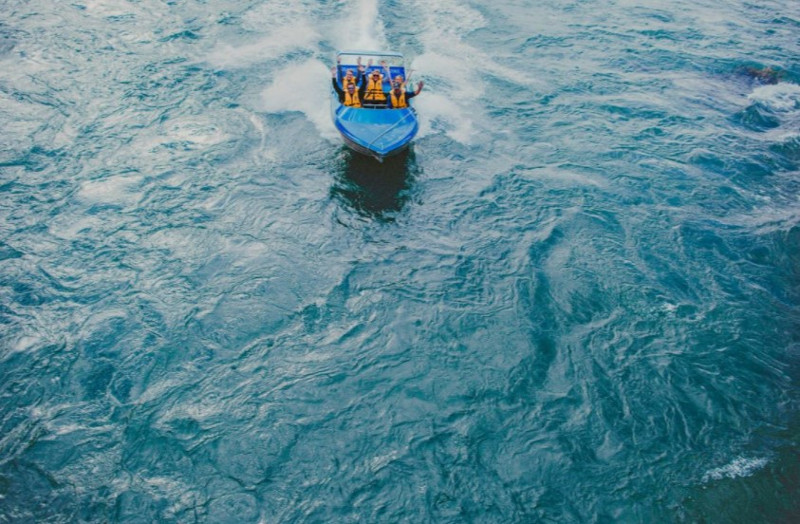 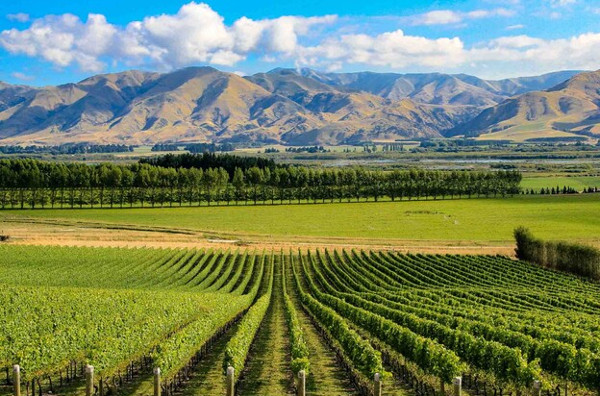 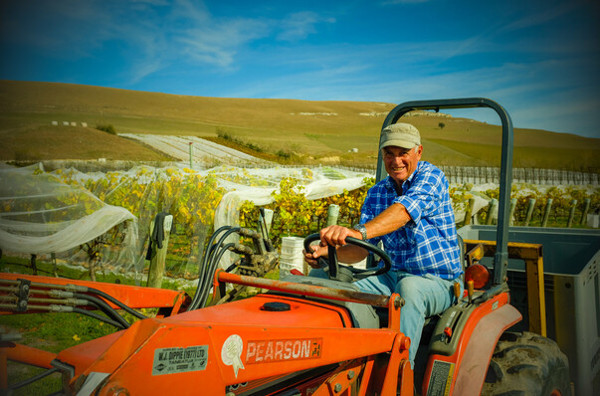 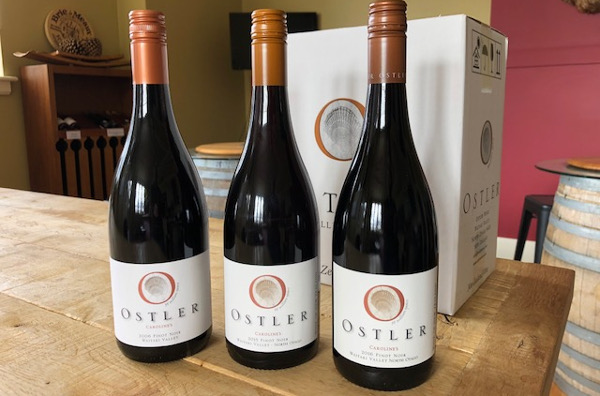