Guide to historic attractions and how to get there

Oamaru Victorian precinct is a trip highlight yet Oamaru’s Waitaki district is a rich treasure trove of heritage buildings and museums worthy of several days taking the slow lane. Open a window into Aotearoa New Zealand’s economic growth on the back of the sheep. Totara Estate once the hub of the frozen meat industry offers visitors a glimpse into the past.  Stand on top of dams that provide the electricity to light Oamaru and enjoy a picnic under shady trees. Wonder who the artist was at Maori rock art sites and explore Kurow’s heritage buildings and museum. Find Nicol’s blacksmith shop and make sure to hang around when the bellows blow. It’s Otago after all and there is a historic gold mining site, Golden Point Historic Reserve (Macraes) to visit.

Check opening hours as several key attractions are either open weekends only or one day a week. 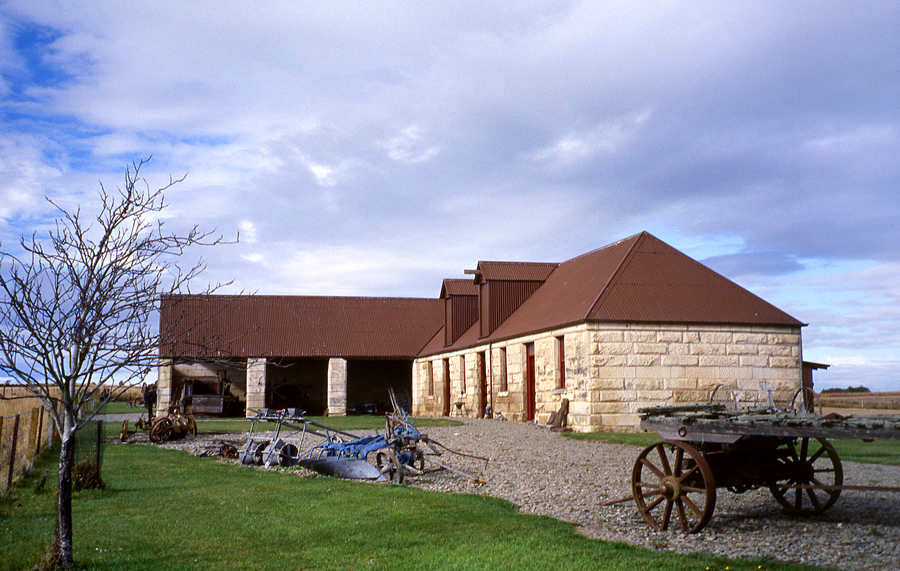 Totara Estate is where the New Zealand economy took off. Finding out about NZ’s industrial heritage made fun with an innovative exhibition in the beautiful stone buildings. Listen to stories narrating the production of the first frozen meat shipment from Totara Estate to England. Promises of scones slathered in lashings of fresh berry jam and finished with a generous dollop of double whipped cream is the reward for a day finding out about how the NZ colony flourished.

Get the kids into the spirit with the costume box located in the Cookhouse.

Totara Estate is picturesque with its whitestone aged buildings, rural farmland setting and sense of timelessness. 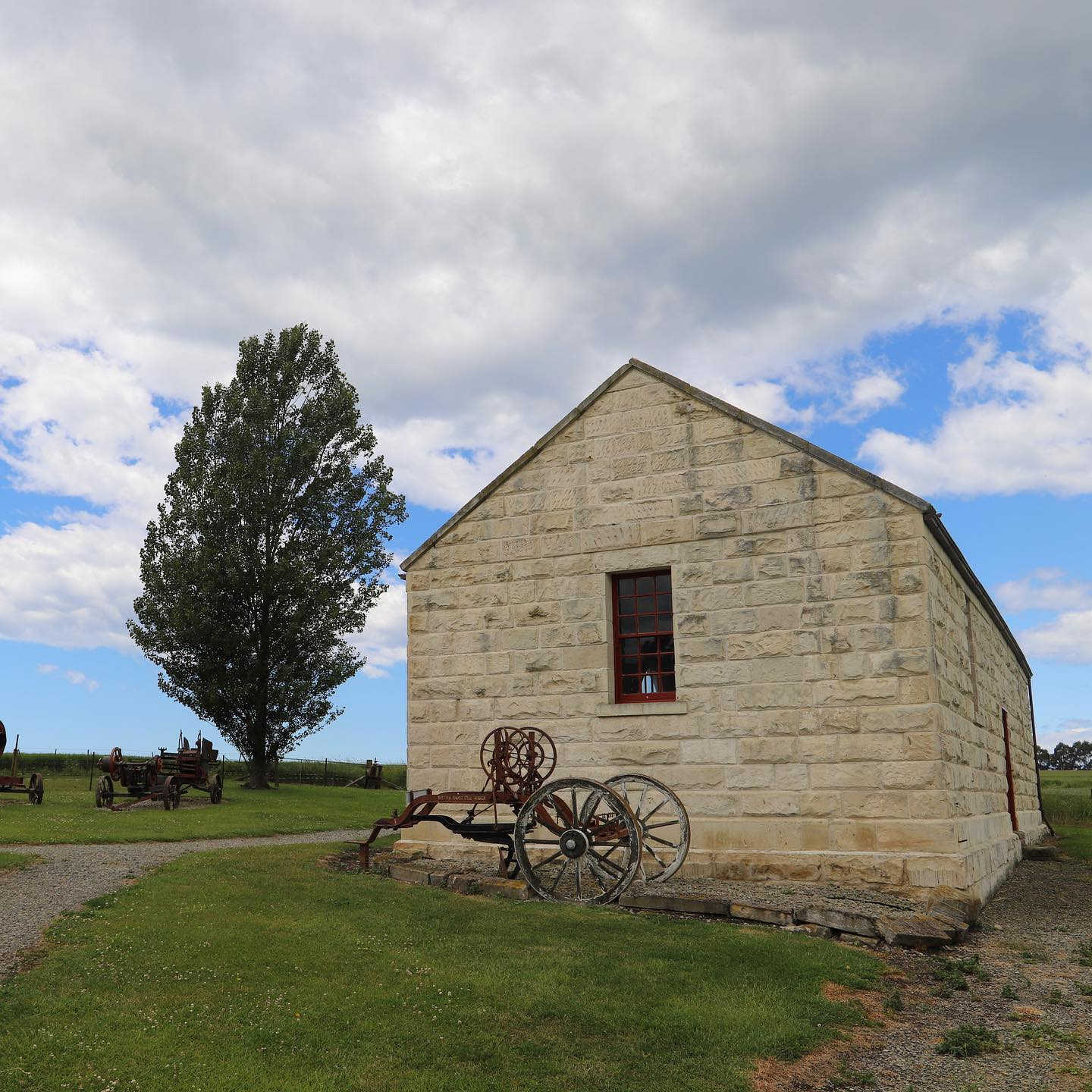 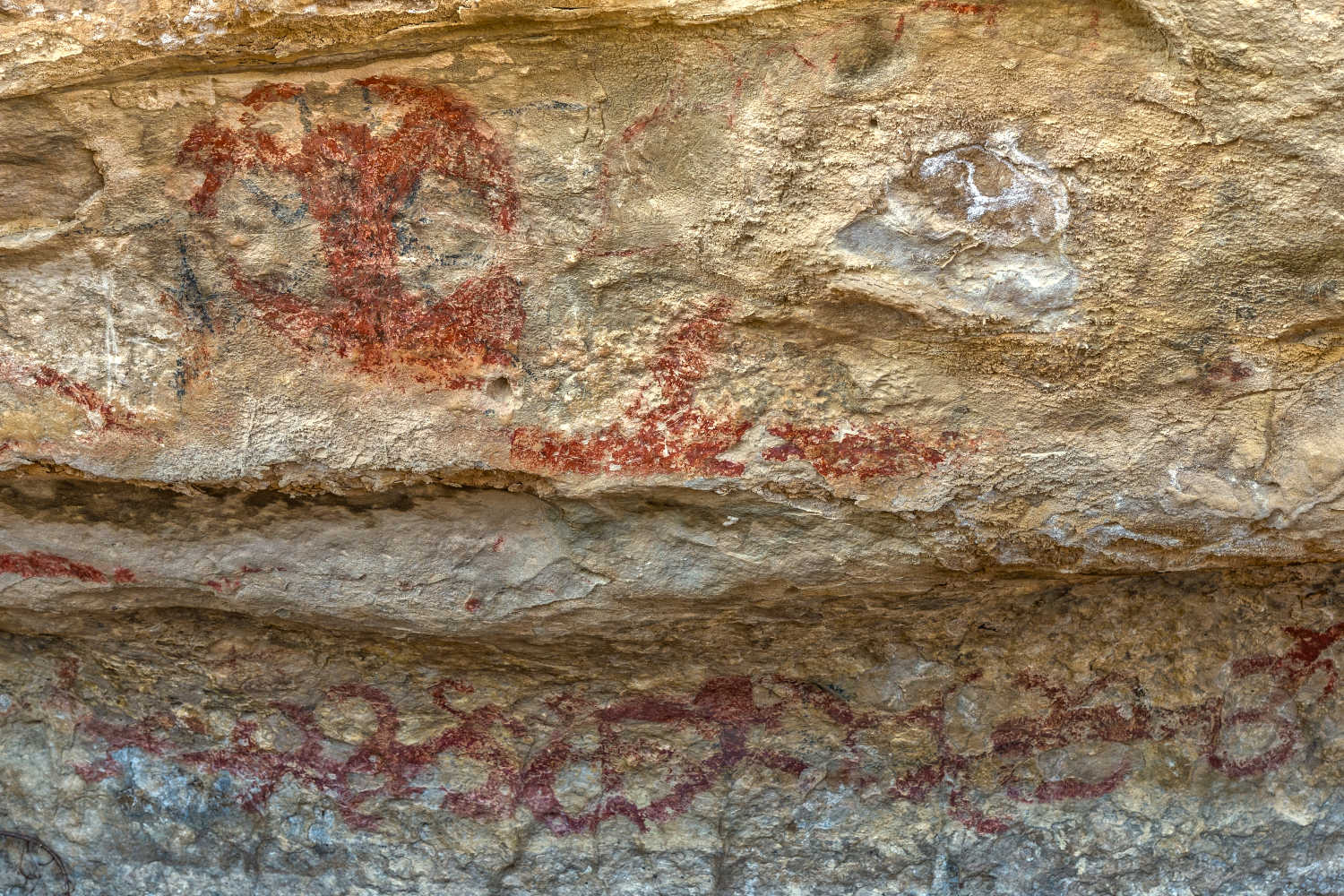 Rare examples of pre-European Maori rock art have survived in the Waitaki district. The smooth light limestone offered a natural canvas for artists to express themselves and illustrate the world around them. Charcoal, kokowai (red oxide of iron) was mixed with bird or fish oil as paints. Carbon dating shows most were drawn between 1100 AD and 1500 AD.

The Nicol’s Blacksmith Shop has been a part of Duntroon life for over 100 years.

A blacksmith smithy has survived intact for today’s visitor to marvel at a world where the farrier and smithy provided critical services for horses and horse-drawn vehicles. The rustic, functional buildings are crammed with the tools of the trade and  represent the vernacular architecture associated with a small blacksmithing business, telling the story of its change of use and function through the architecture of the buildings.

It is not often visitors get to witness a forge in action with fire and bellows adding to the noise of production. Nicol’s Blacksmith is a record of the transition from the power of the horse to the introduction of motor cars. 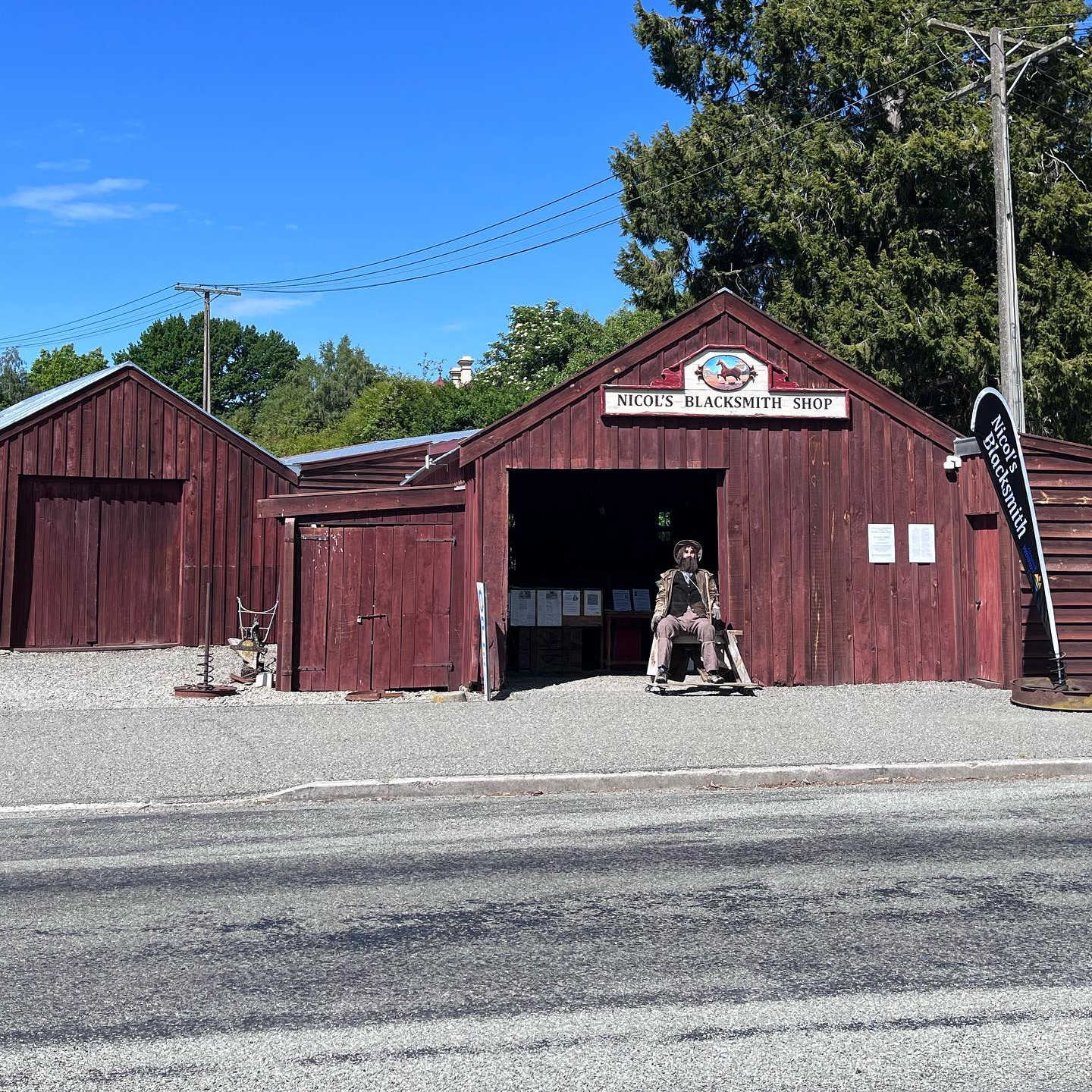 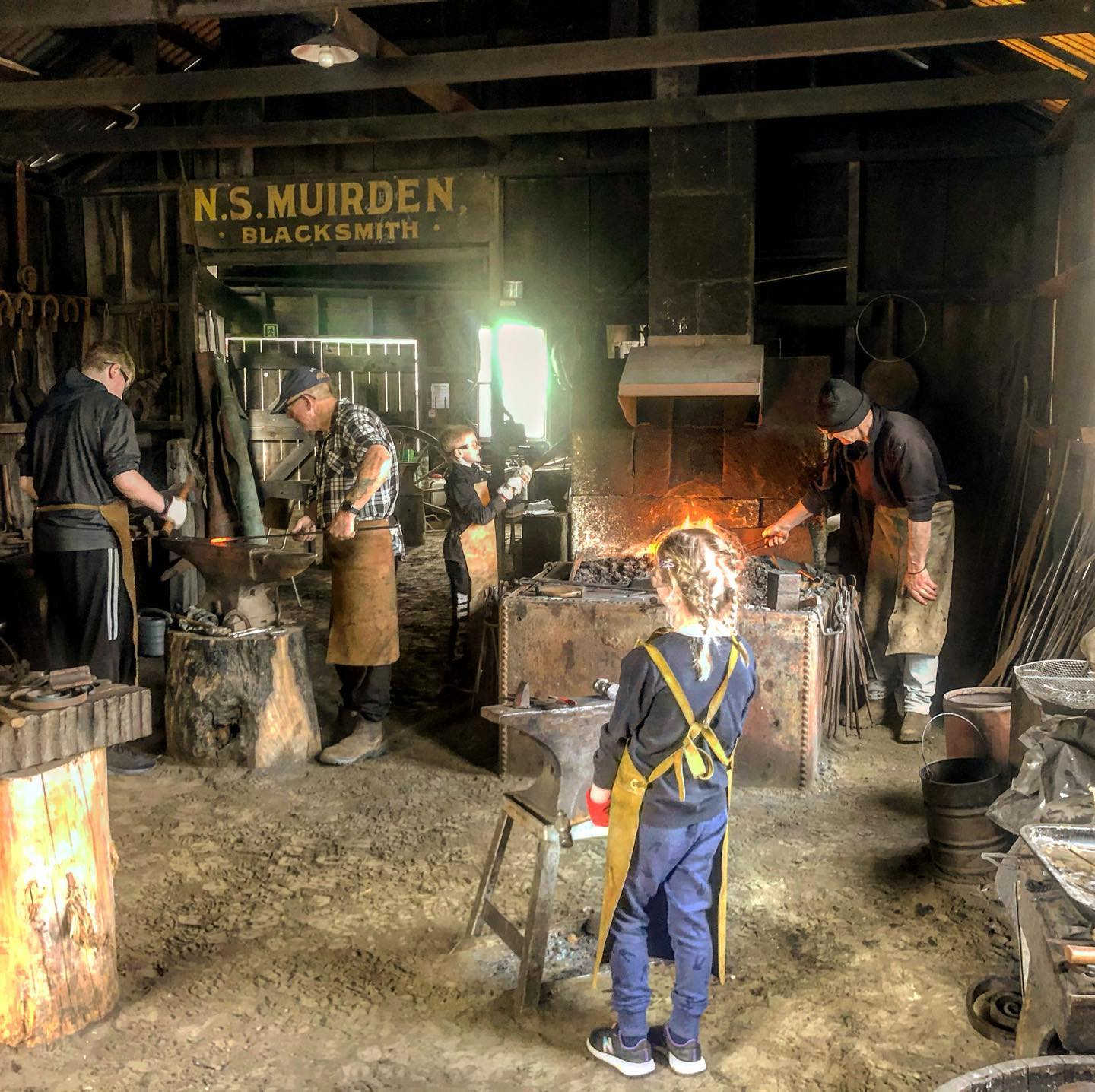 In 1975 concerned local farmers purchased the shop, aware its fate was very uncertain. Today the Nicol’s Blacksmith Historic Trust was formed and ownership was transferred to the Trust. New Zealand Historic Places Trust’s recent classification as category one, recognises it as a place of national significance, emphasising its authenticity and importance in telling the story of the role of the horse in the development of this nation.

Check Nicol’s Blacksmith Shop for opening hours. Usually there are blacksmith demonstrations on Saturday from mid-October until late March. Other days the blacksmith shop is open for viewing only.

The wooden bridge was an essential crossing between the north and south sides of the Waitaki River. Built in 1893, of hardwood timber, it has remained intact (with the necessary repairs) despite the ravages caused by the occasional raging torrent of the Waitaki River, and from fire. While the single lane bridge has been replaced the original bridge sections are part of a display about the Kurow bridge at the site and used to create seats in Kurow’s main street.

Early European settlers and gold diggers travelling in bullock wagons and horse-drawn coaches had a place to rest on their migration to the gold fields.. On the north bank of the Waitaki River (SH82) is the Cobb Paterson’s accommodation house, built in 1872. (Kurow). The cottage has a single roof and is built from cob, a building material made of dried mud and straw.

The restored cob cottage just off of SH 82 near Hakataramea is occasionally open to the public to see what life was like in the 1880s, check with the Kurow Museum beforehand. The cottage is easily accessible from SH82. 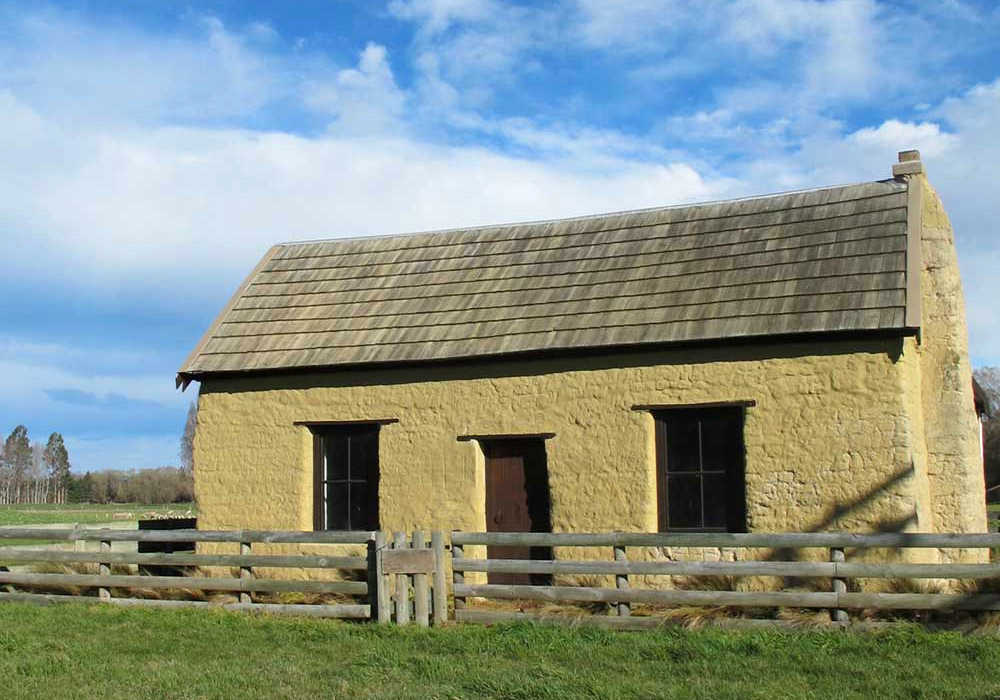 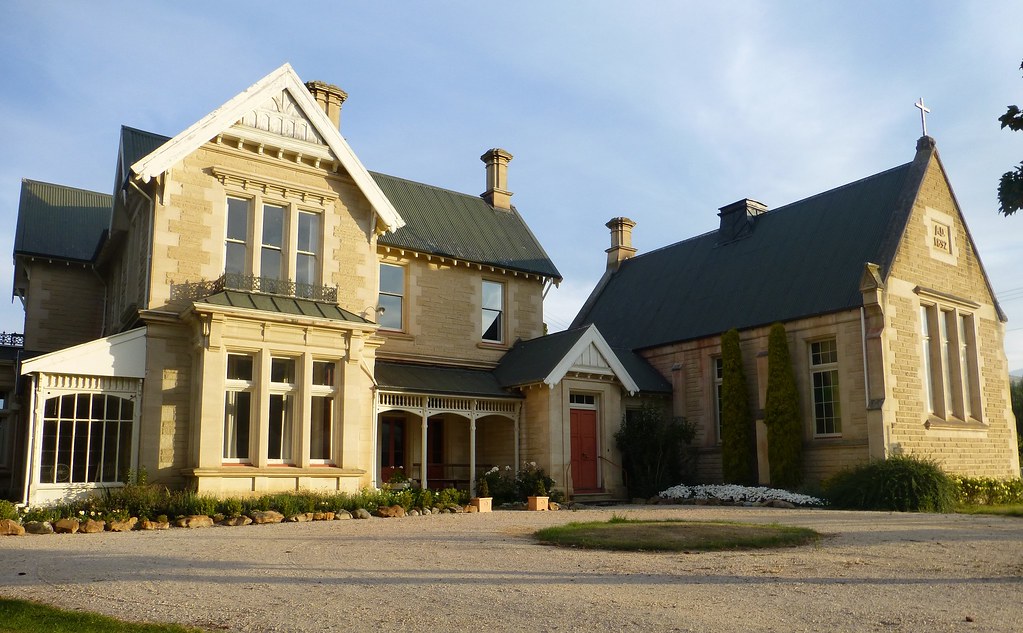 The combined chapel and vicarage at Kurow (S/H 83) has a Heritage NZ Category.1 listing. It is constructed of limestone and kauri wood, and is the only example in New Zealand where a vicarage has its own chapel. The near original condition of the chapel, vicarage and adjacent outbuildings greatly enhance their architectural importance.

Look for the stable block build in the same time period. The stables are constructed from locally quarried limestone. The stables have a tack room, buggy shed, loose box and groom’s room with its own fireplace, and its walls are of ashlar masonry construction.

The Anglican parish buildings were designed by John Forrester,  circa 1892-4.

It is a hit and miss whether the church and buildings are open. For dedicated architectural buffs check with the Kurow Museum to assist with your query.

Clarks Mill, imagine a flour mill, one of this country’s earliest, built of Oamaru stone quarried from a nearby escarpment and rising imposingly above the North Otago landscape.

Now picture walking inside, where someone has just flicked the switch that sets in motion four storey’s worth of rare vintage milling machinery. In an instant, Clarks Mill is transformed from a static heritage landmark into something like a living organism, all spiralling shafts, spinning belts and the whirr of pulleys. It’s incredible.

You won’t witness Aotearoa New Zealand’s only originally surviving water-powered mill in action without some forethought, however. For safety reasons the mill can’t operate without a volunteer on each floor, which means visitors should book ahead for a group tour. 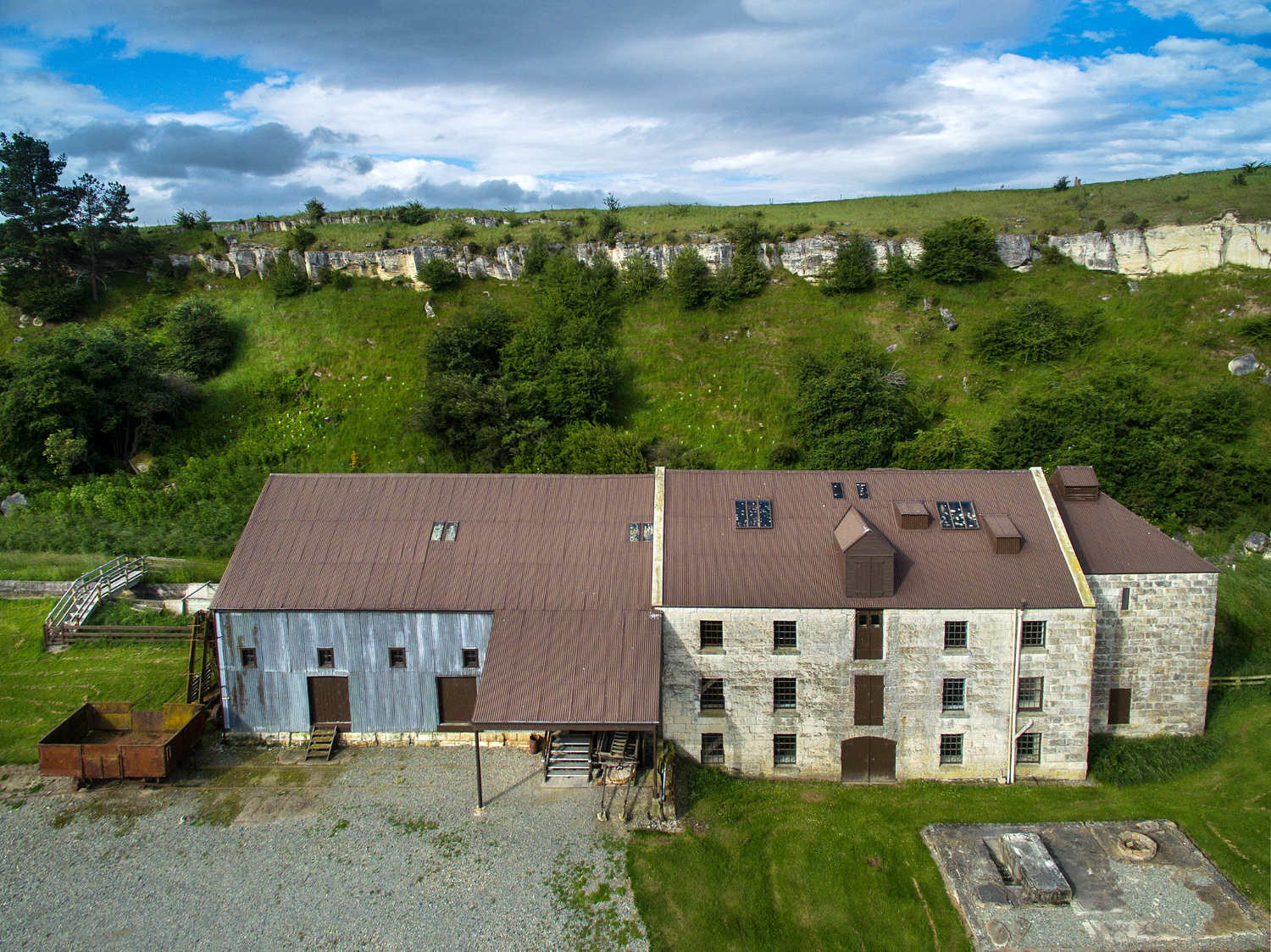 Alternatively, keep an eye out for their operating day, when the mill is running and the miller’s house is open to visitors… If you’re curious about our industrial history or an engineering buff, you’ll find the mill’s inner workings enthralling. If the mill is not your thing, the Clarks Mill complex also includes a miller’s house and garden as well as ‘Smokey Joe’s’. The latter, a stone cottage neighbouring the house, was set up as a night club by one of the Clarks after he returned from WWII. With its walls painted in exotic scenes, a busy bar in one corner and a ubiquitous cigarette haze, Smokey Joe’s became a North Otago legend. 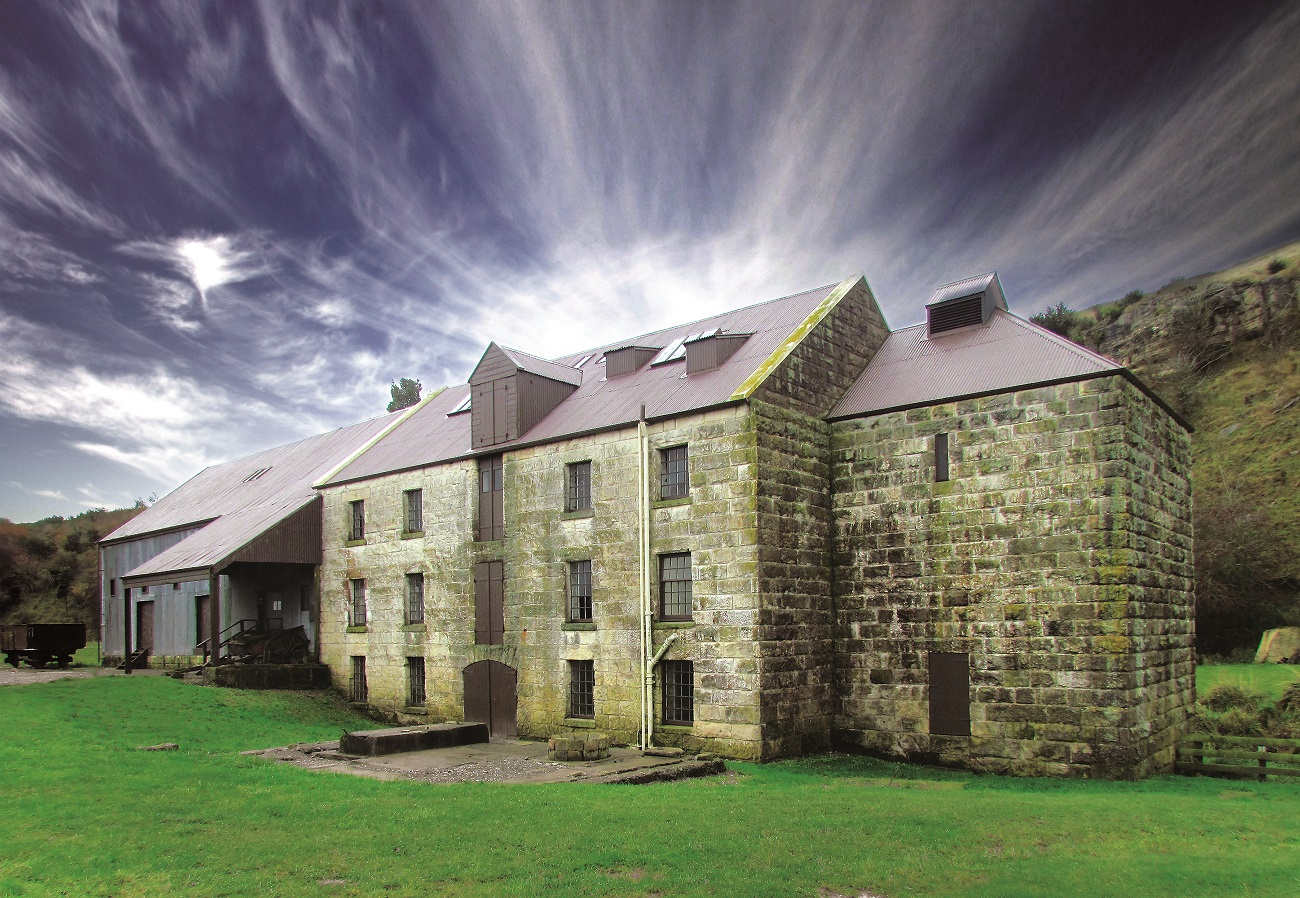 Both cottage and house are only open on live operating days. However, the colourful garden, which has been recreated based on Clark family photos from the 1940s using bright dahlias, asters and heritage roses, can be viewed any time.

Source An introduction to Clarks Mill

Check out operating times to ensure you enjoy the whole experience and see, hear and feel what work in the mill was like.

The Kurow Museum is fulled to the rafters with memorabilia, collectables and photographs from earliest times. The museum has a unique reed boat. The original inhabitants of the areas were theWaitaha who used a reed ‘boat’ called a mokihi to navigate the wild Waitaki River. Call in to Kurow Museum to see the replica mokihi made by the late Rangi Te Maiharoa – a descendant of the Waitaha. Find out about the story of the Waitaha people and their eventual defeat by Ngatu Tahu in the 19th century. European settler stories and the development of the Waitaki Hydro Dam. Discover how Kurow became the birthplace of our social welfare system. 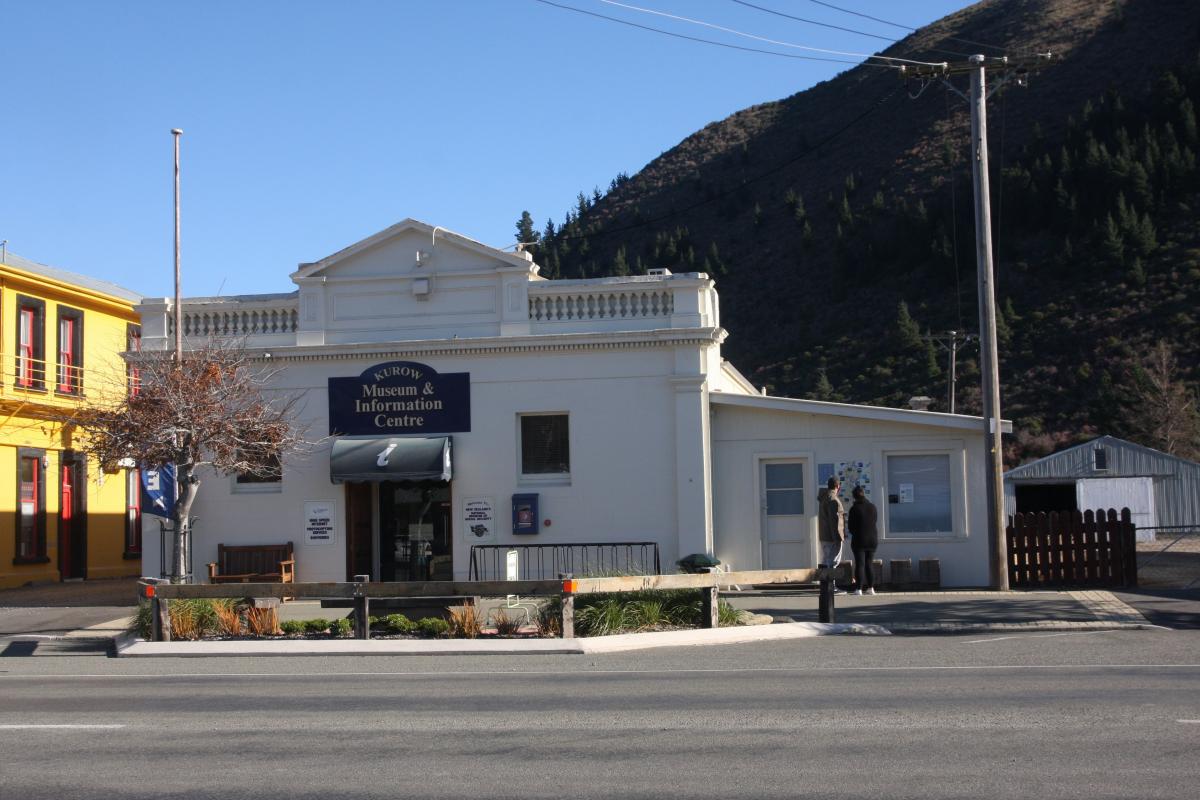 The pretty as a picture building was originally a dance hall.

The museum is part of New Zealand’s visitor network and is open between 9.30 to 4.30pm Monday to Friday. Check beforehand to avoid disappointment.

Wonder at the massive open cast pit size and the enormous machinery in play from the viewing area of New Zealand’s largest gold mine.

The Macraes Mine has produced over 4 million ounces of gold and is New Zealand’s largest gold-producing operation. Located in East Otago, Macraes consists of an open-cast pit and Frasers Underground mine. Frasers sits 200m below sea level and 740m below the ground surface. The network of developed tunnel drives is around 48km.

From the purpose built viewing area, visitors can look over and into the expanse of the open-cast pit, watching the heavy machinery at work. Dump tracks will systematically haul their cargo up and out of the pit before returning with an empty tray, rolling right past the viewing room. You can also see the underground entrance at the bottom of the pit. Interpretation information is displayed inside viewing room. 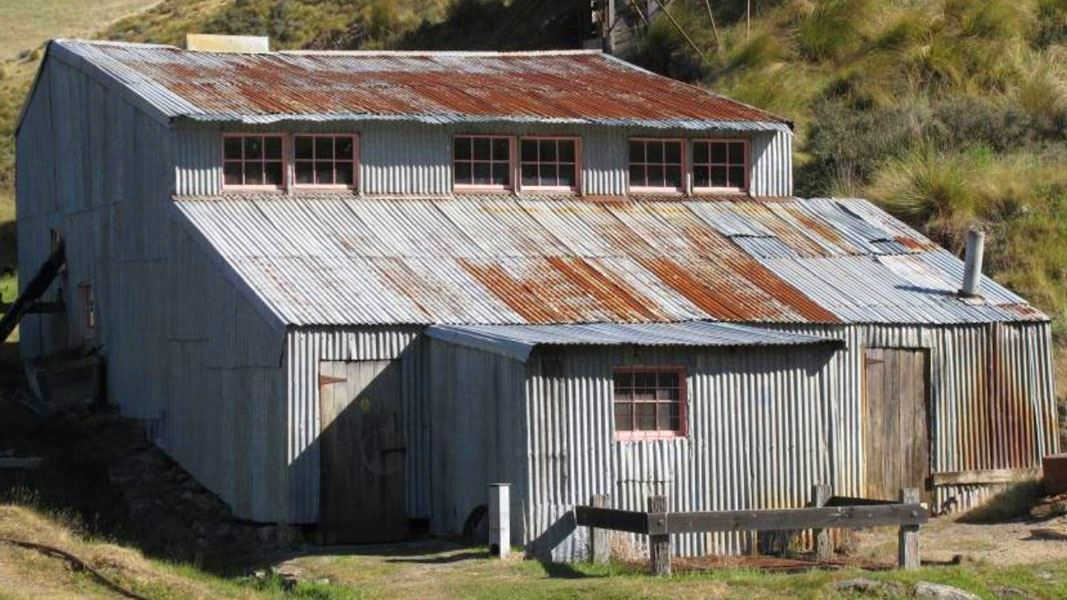 Combine your heritage trail of Oamaru and Waitaki District with a tour of Duntroon Vanished World, Elephant Rocks and spend time exploring the small towns of Kurow, Duntroon and Omarama and Lake Ohau. Flying into the South Island from Dunedin? Then the delight of finding out about Oamaru and less visited attractions is a mere 1 ½ hours drive (112.7 km). 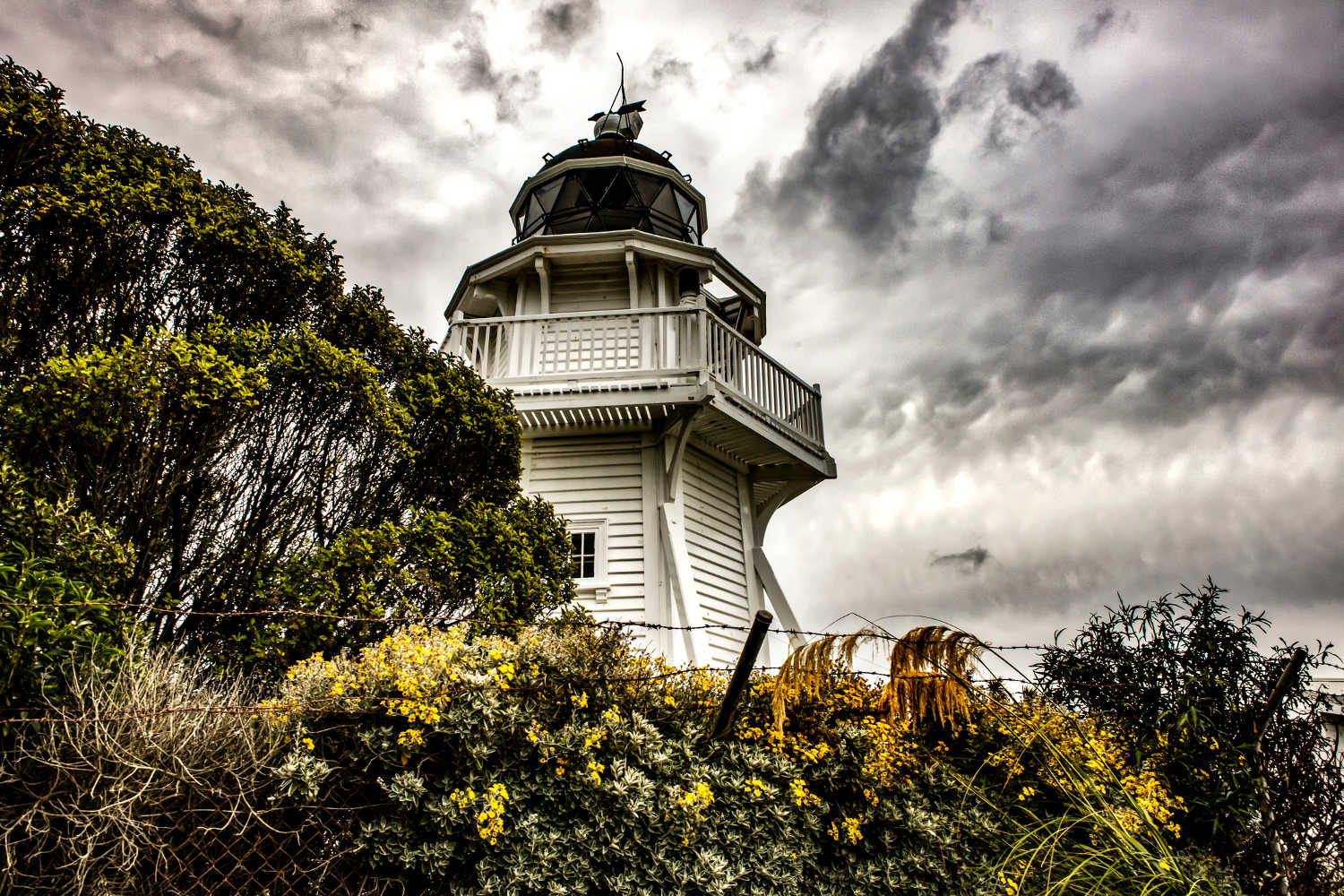 Wander up the hill to the Te Raka a Hineatea Pā site. A pā is a terraced Maori hill-fort; a very important settlement site for local Maori… read more about Kātiki Point Walking Track. 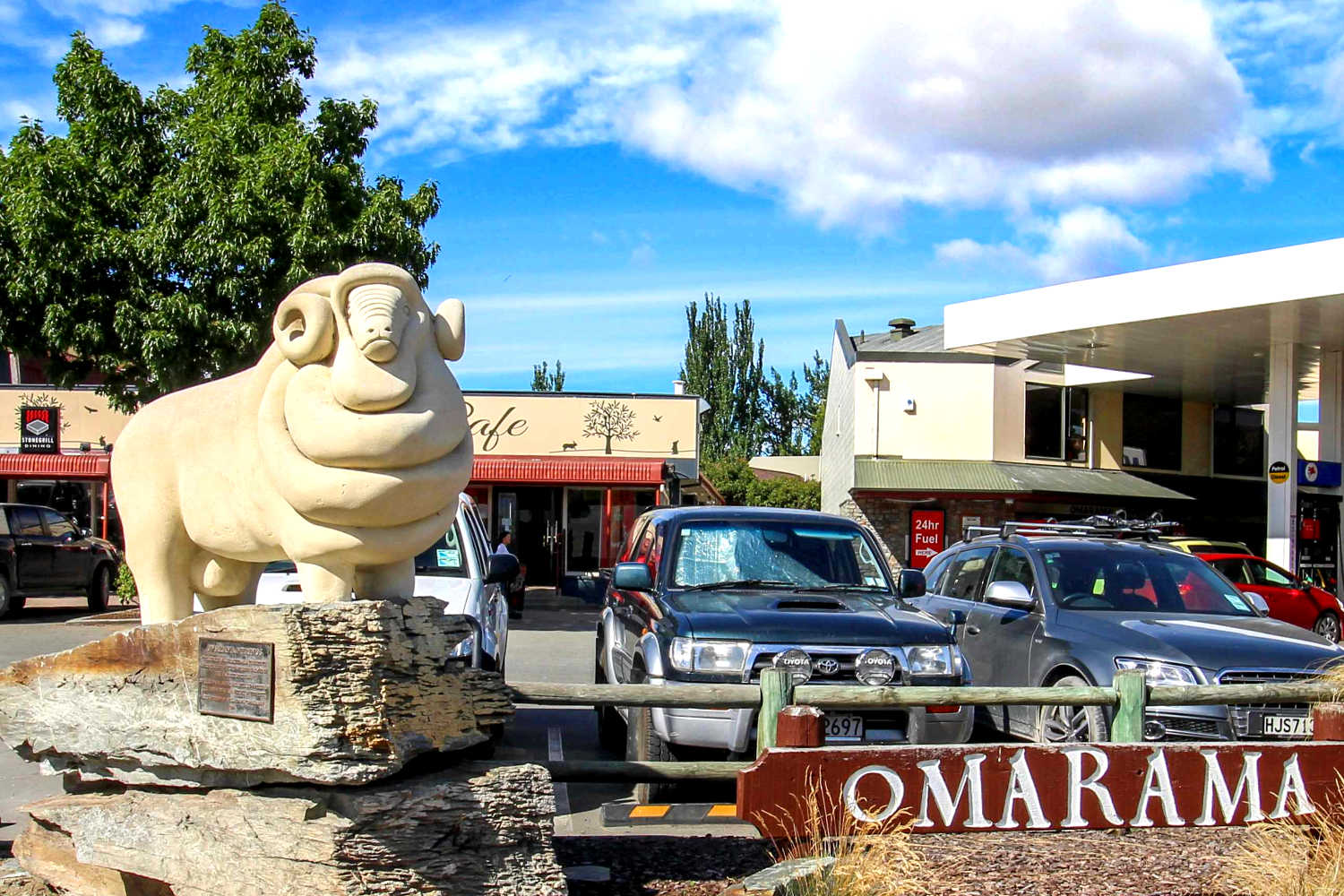 What’s so great about Omarama

What do you think about “Oamaru & Waitaki district heritage trails”?