On your way to the well known Denniston historic coal mining site you will find towns with a coal mining legacy that are now largely forgotten. Granity, Ngakawau still a coal depot for the Stockton mine, Hector, Wainangaroa and Millerton, As part of the Denniston narrative Stockton Coal Mine is currently operating and, as part of the story of West Coast coal mining is worth a detour.

Follow in the footsteps of prospectors, a heritage gold and coal mining trail. Today you will be on the trail of a nineteenth century gold miner. You will be travelling north viewing Denniston Plateau to your right as you travel between the mountains and sea delving into the past in Hector, Granity foreshore and Granity Museum, Ngakawau, Millerton, and Stockton. Hector is the home to the Country Music Museum. Visit Granity and witness the action of climate change on a small settlement.

The terminus for the Stockton aerial ropeway which transports the coal in buckets from the current operational mine on the Stockton plateau to be loaded onto rail for export through the Port of Westport and the Port of Lyttelton on the east coast. Ngakawau is located on the southern side of the Ngakawau River which flows out to sea at Hector. 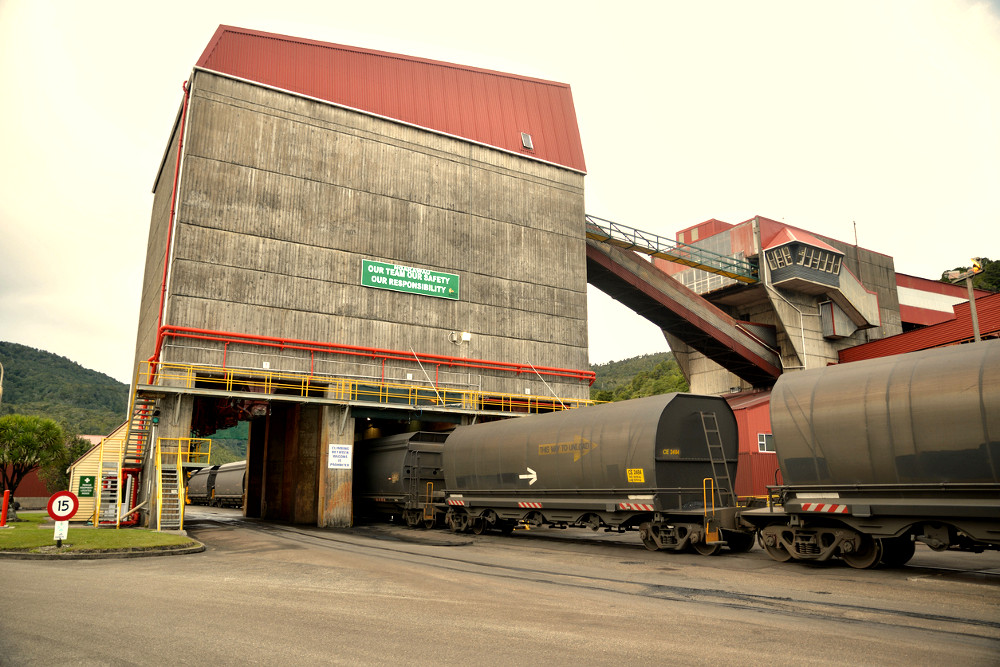 Ngakawau coal terminus for Stockton mine

The ropeway has eliminated the dangerous inclines of Denniston and Millerton to transport coal to rail hubs. The coal is largely exported via ship to steel makers in Japan, India, China, South Africa and Brazil. Parcels of coal are barged from Westport to Port Kembla, New South Wales in Australia. It is a massive industrial operation with coal dust, coal debris in large slag heaps and is a visible reminder of the historic and current importance of coal economically for the West Coast. 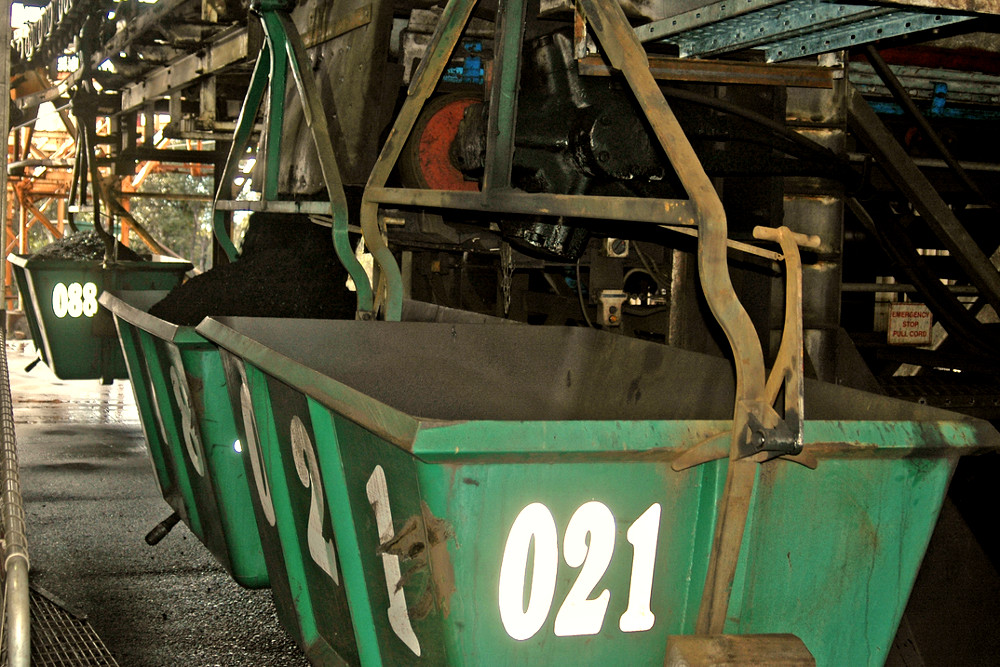 Granity is a must do visit stop for everyone interested in climate change. You stand on the contructed stoney embankments and watch the sea relentlessly working away at the foundations. And the nearest houses are very close. There is a notice and plaque showing where the community hall once stood. It is sobering watching the rising sea rewrite land boundaries. Granity is a historic gold & coal mining town. Granity is home to the Granity Museum. Located in the centre of Granity (sign posted off the main Road) on a historical site, being coke ovens built 1909-1910. Buildings and sites belong to the Northern Buller Museum Trust. It also owns the Millerton Incline behind the Museum. Work is underway to get the Incline reinstated as a Walking Track. At Ngakawau and Granity you can do short walks to the coal bins, Watson and Mumms Mill to view coal mining abandoned relics. You cannot miss the museum as it is very large. 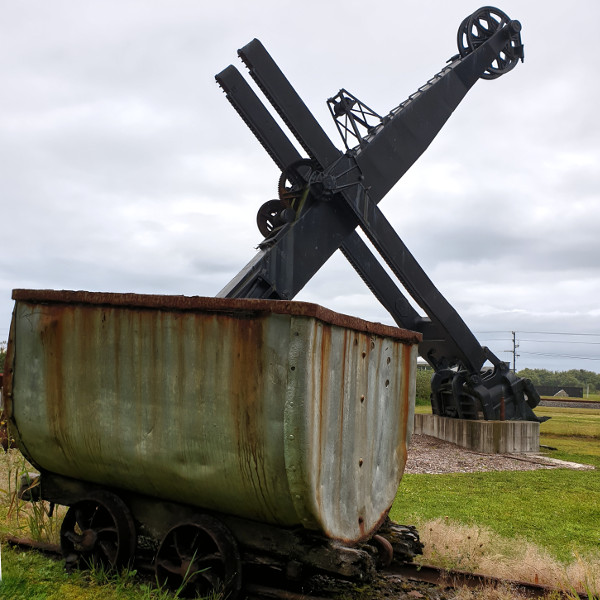 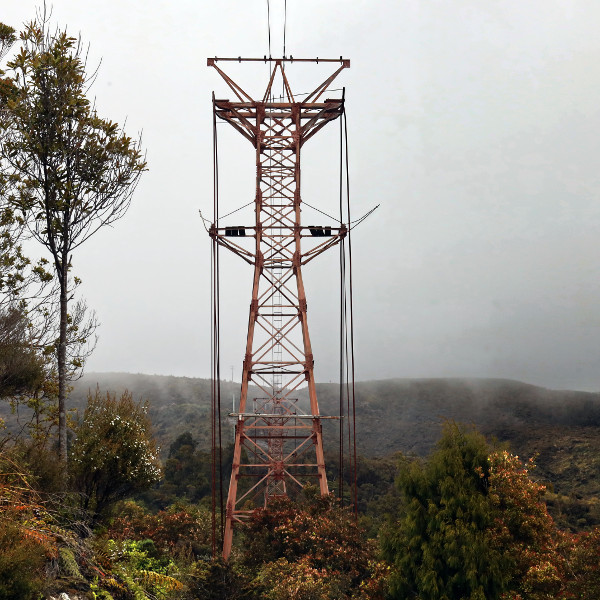 Call in at the local pub in Ngakawau for local colour. Perhaps have a bite to eat. At Ngakawau take a walk through the local campgrounds to the beach to view the rugged coast and Tasman Sea pounding the beach. You will have already visited Granity and observed the impact of climate change

WAIMANGAROA AND BRITANNIA GOLD MINE

You can try your hand at gold panning. See what your fortunes bring for the day. Be prepared to be disappointed. North of Waimangaroa is O’Connor Road leading to a car park, The walking track is the original bullock track and is wide and easy to navigate. Entrance is located in the carpark. Follow signs to the gold fossicking area. Hand tools are allowed and no permit is required. The designated area is from the abandoned gold mine to the beginning of the farmland downstream. The second signposted track leads to the Republic battery site. Continuing up the valley, several tracks lead off. The first drops down to the Republic Battery site. A few scattered remnants remain here. The second side track leads quickly to an old adit, full of cave weta. The main track becomes rougher and crosses a few hillside streams before turning off the bullock track (which runs out soon anyway) and dropping to the Britannia Battery site. 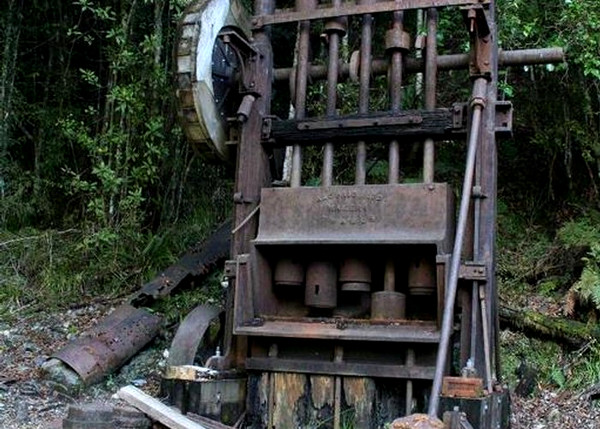 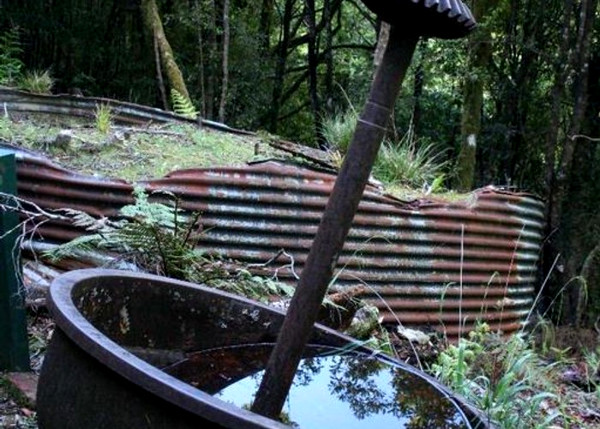 Dropping through native bush is the Britannia battery. The quartz crusher battery reduces the rocks to small pebbles to assist with the dissolving of the gold in a cyanide water solution. The battery dates from 1925 built by Price of Thames whose buildings are still used for steel manufacturing. It is very impressive, an industrial piece of machinery in the middle of what is now quiet forest. The Britannia Mining Company 1896 and ceased in 1910. The area was restarted in 1925 and the 5-head stamper battery was brought to site then. There were various mines dating back to 1875 to 1937 in the area. The site has plaques describing the site’s relics which include pelton wheel and cyanide tanks.

Take the high road and explore the coal mining, now largely abandoned Millerton settlement. It has the air of a ghost town with a number of empty buildings and infrastructure. Despite its elevation of 300 m being considerably lower than that of Denniston (494 m), the grade between the coastline and Millerton still meant that the coal was difficult to get down to the railway. The Westport Coal Company built the Millerton Incline in 1891 and the Millerton Mine began production in 1896. Mining at Millerton ended in the late 1960s, similar again to Denniston. 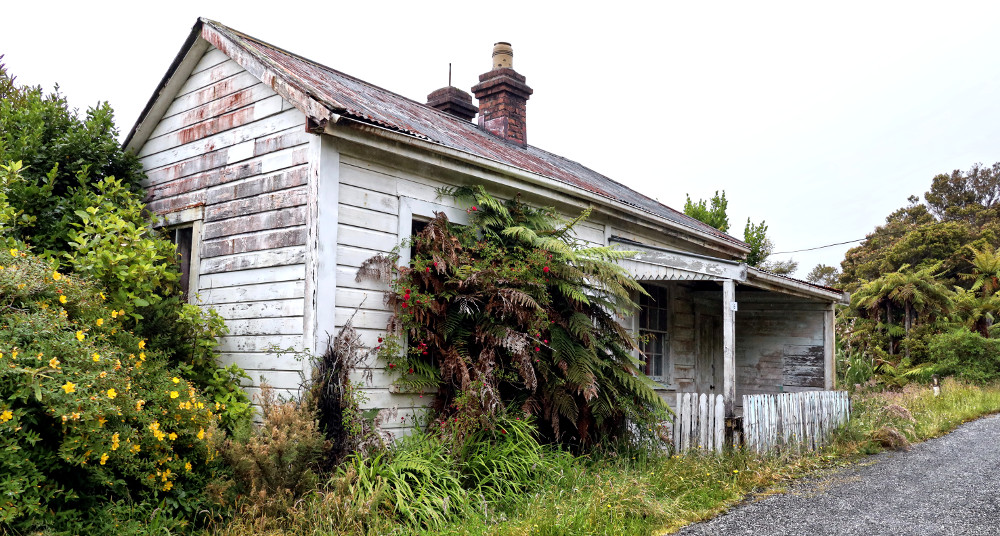 The Millerton Incline, 1891 was a narrow gaug bush tram econsisting of two parallel tracks on which the coal tubs ran, being hauled by rope.  The incline dropped 260 metres to the coast.  Remnants of tracks, trucks, bath houses and other installations are still visible. The Millerton Incline was in its day quite a feat of engineering and the remains of this incline and its infrastructure are more accessible then those of the more famous Denniston incline. The Millerton Incline was used to convey tubs of coal from the mines around the Millerton area to the Bins at Granity, which in their day were the largest coal loading bins of wooden construction in NZ. The Bins are long gone, but the incline remains and is well worth a look. The informal information centre is in what is effectively an abandoned house, there are dusty maps and photographs, furniture thta is showing the effects of weather and time. The settlement is a snapshot of archeological ruins in the making. Nature is busy making a comeback and reclaiming houses and public areas. It is fascinating to think while there about two hotels, shops, churches, sports grounds and library now dissolving back into the bush. 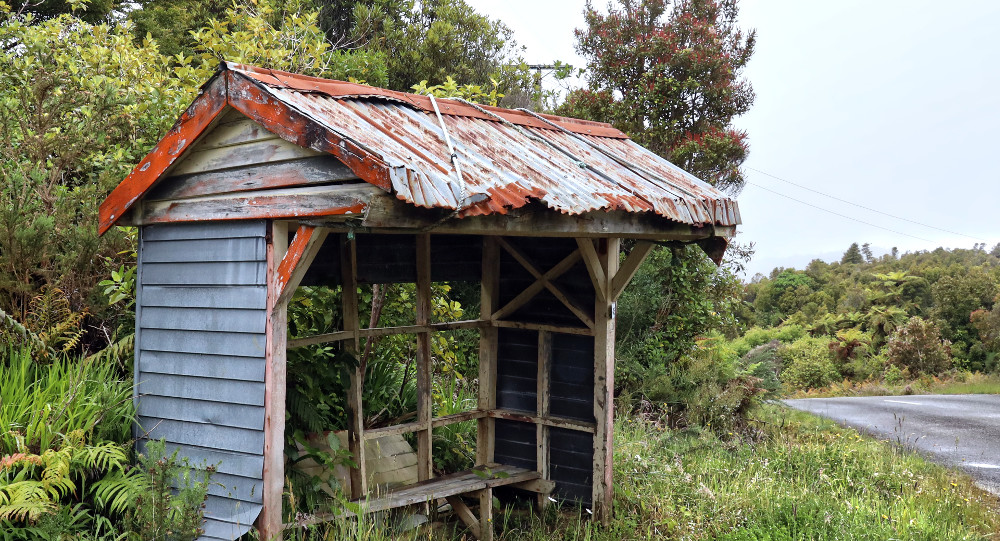 It is a narrow, steep winding road setting the scene for a visit to a part of New Zealand that has very few visitors. The road to Millerton has spectacular views across the coast and the rain forest.

Perhaps you would like a tour of Stockton’s current mining operations at the nearby Cascade mine, New Zealand’s largest opencast mining operation in Stockton. Tours of Cascade are only through an authorised tour operator. The plateau is a must do visit where you will discover the narrative of what it was like to be a miner on the Denniston Plateau. The extraordinary uplifted plateau is a drive into another world where coal was king. The Denniston Plateau is home to one of the richest, high quality coal seams in New Zealand. For decades it was the country’s largest producing coal mine, with an estimated 12 million ton carried down the incline during its operation from October 1879 to August 1967. Denniston was created by coal and existed only to produce coal. With the mine’s closure, Denniston closed.

The town has disappeared into the efficient recycling world of the west coast with very little evidence of the residences and homes of over 2,000 people. Only two houses remain. Yet steps to nowhere, abandoned mining equipment is everywhere and extensive industrial foundations, house piles remind visitors of the disappeared people and town. Spectacular mist swirls around the landscape adding to the sense of closure and history where people once stood. Coal is still mined in the area today at the nearby Cascade mine and New Zealand’s largest opencast mining operation in Stockton. 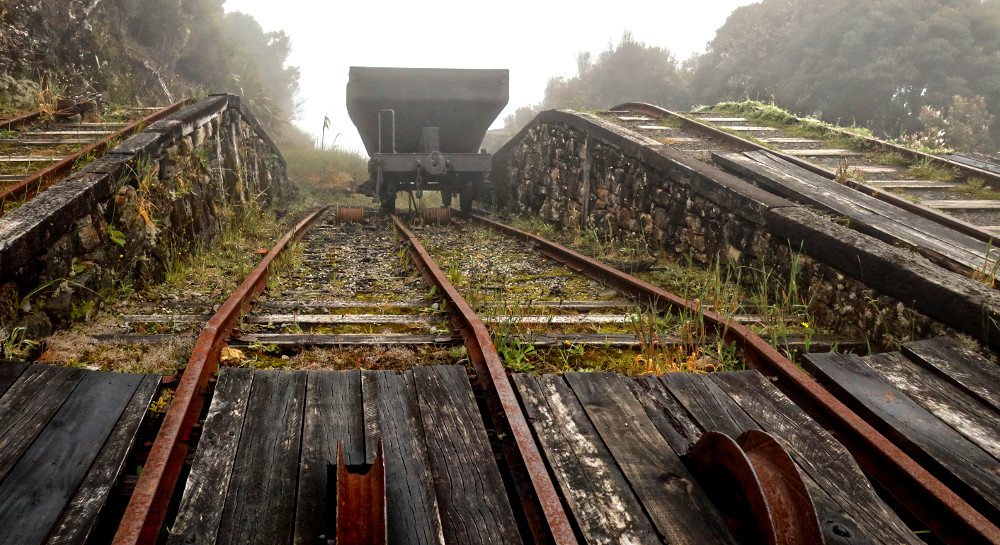 How to find Denniston

Denniston is approximately 30 minutes from Westport. Travel along State Highway 67 and turn right at Waimangaroa. From here the Denniston Hill road twists and turns for 8 km, taking around 15 minutes to arrive at The Denniston Experience. All roads are sealed. You are climbing 1.7 km over 600 metres in elevation. It is a great start to the Denniston journey.

Denniston Experience Underground Mine Tours is a must do part of the exploration of the coal mine. Over 179 metres of the Banbury Mine is a replica 1880’s mining site. There are hologram displays and interactive exhibits as well as working equipment. The atmosphere and sense of what it is like to work underground is faithfully portrayed.

Displays and lighting were installed in the walk around areas and cross cuts. 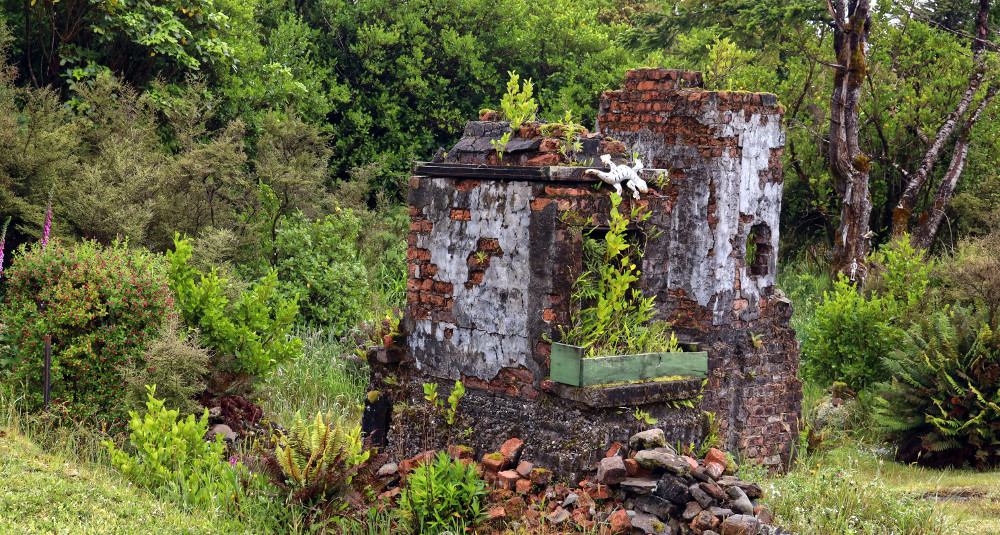 Weather on Denniston is sub-alpine

The weather at Denniston is sub-alpine and can change quickly, so please bring:

GETTING THERE – DENNISTON PLATEAU

What do you think about “Denniston Plateau, Millerton: abandoned coal mining towns”?