Rotorua Buried Village, a story of the Tarawera eruption

A working archaeological village is New Zealand’s Pompeii, a village buried under the ash and pyroclastic flow of the 1886 Mt Tarawera volcanic eruption. The eruption ended the lives of over 120 people as well as destroying settlements and villages. Te Wairoa buried village is now a heritage site narrating the stories of the inhabitants and the vanished wonder of the pink and white terraces. 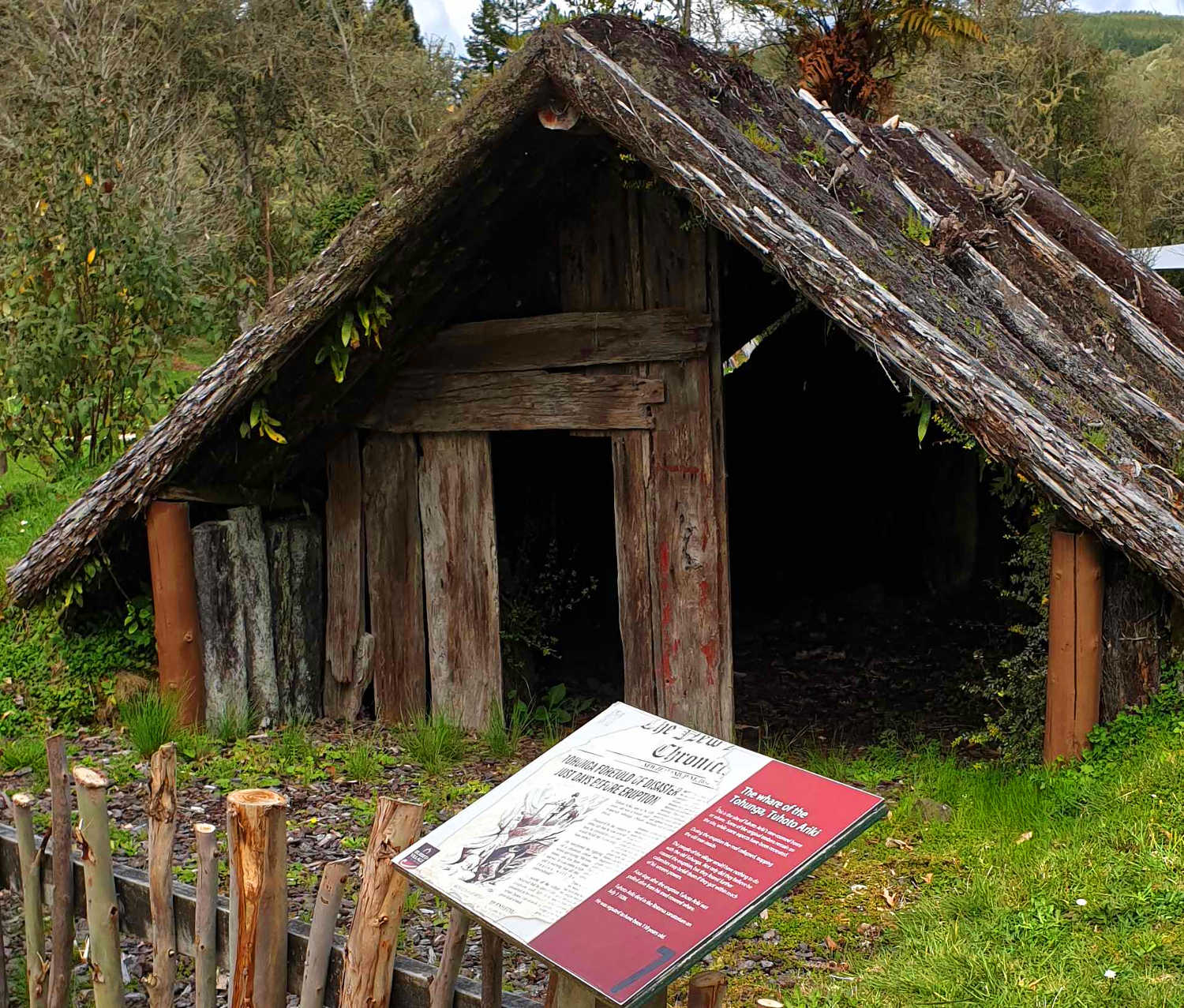 The story of the archaeological discoveries is aptly captured in the award winning museum. Together with a walk through the archeological excavations, recreated village buildings and a waterfall trail the Buried Village is a great place for all ages to hear the tale of how nineteenth century New Zealand tourism faced the consequences of a volcanic eruption.

The Buried Village site is owned and operated by the Smith family who,over four generations have been the custodians of the story of the Tarawera eruption. Rotorua has a number of visitor experiences that are paid attractions. Entrance to the Buried Village, Tarawera site is not free however visitors are supporting the continuing investment in archeology and the care of a historical record.

Imagine the nineteenth century journey to paint and sketch and soak in the warm mineral water of the Pink & White Terraces. Touted as the eight wonder of the world the journey to get the terraces was an adventure in itself. Nineteenth century visitors either caught a boat or stagecoach to Rotorua. Then a dray buggy to Te Wairoa before catching a whaleboat to cross Lake Tarawera to get to the terraces on Lake Rotomahana.

It was certainly not a fly in and fly out day trip. Te Wairoa nascent tourist industry fostered two hotels, public buildings, Hinemihi meeting house, a church and school as well as private homes. Celebrity guides such as Sophia were sought after to escort visitors to the terraces. Visitors needed to be wealthy. It was a select club of visitors that arrived as it was expensive with cultural performances, boat fees, food and beverages, stops for photographs, painting excursions all were individually charged. The local inhabitants, the Tuhourangi hapu (sub-tribe) part of the Te Arawa people,benefited financially.

Interesting comments about the impact of tourism, the alcohol abuse, prostitution and erosion of cultural values was starting to make its voice heard. Tourism, nineteenth century style was being questioned for its authenticity and impact on local communities. Then the eruption destroyed communities and livelihoods. 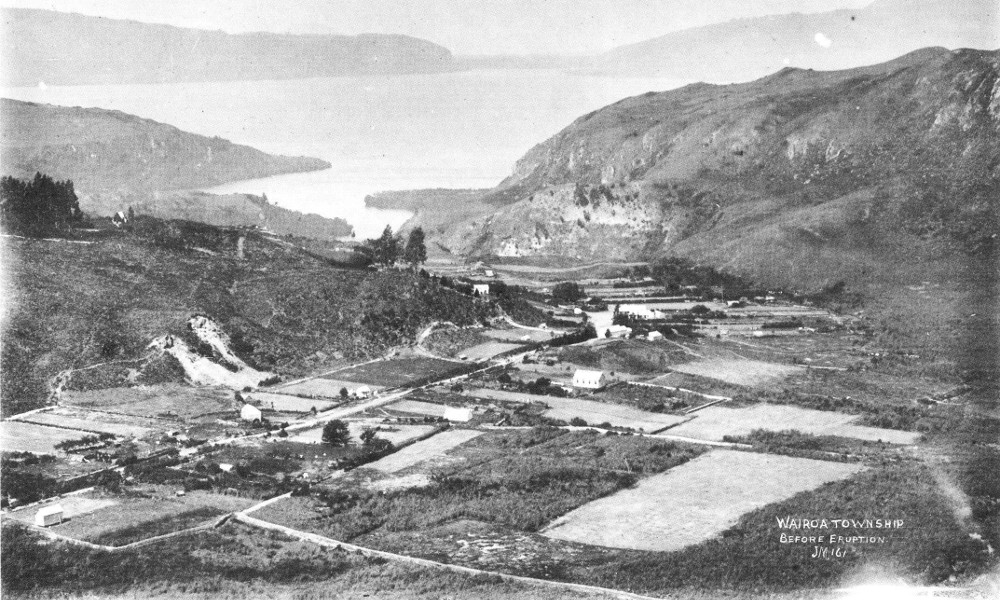 Is small in size and big on content. There is a comprehensive overview of the Te Wairoa village before and after the eruption. The lives of the inhabitants and the struggle to survive the trauma of a volcanic eruption.

Using audio clips narrating letters and conversations with survivors visitors are immersed in the horror of the night.

Artefacts, fragments of pottery, stoneware and photographs document the destruction along with detailed stories of when and where archeological evidence was unearthed. The stunning beauty of the pink and white terraces offers a counterpoint to the grey ash photographs illustrating the depth of damage. The fortitude of individuals and the sense of community that led to the survival of visitors and locals are moving personal stories of heroism.

There is a dedicated children’s room to invite young visitors to engage with the story as well as stimulate understanding of the process of a volcanic eruption. Look for the sewing machine which ended up high in a tree due to the force of the volcanic winds.

There is a dedicated children’s room to invite young visitors to engage with the story as well as stimulate understanding of the process of a volcanic eruption.

Look for the sewing machine which ended up high in a tree due to the force of the volcanic winds. 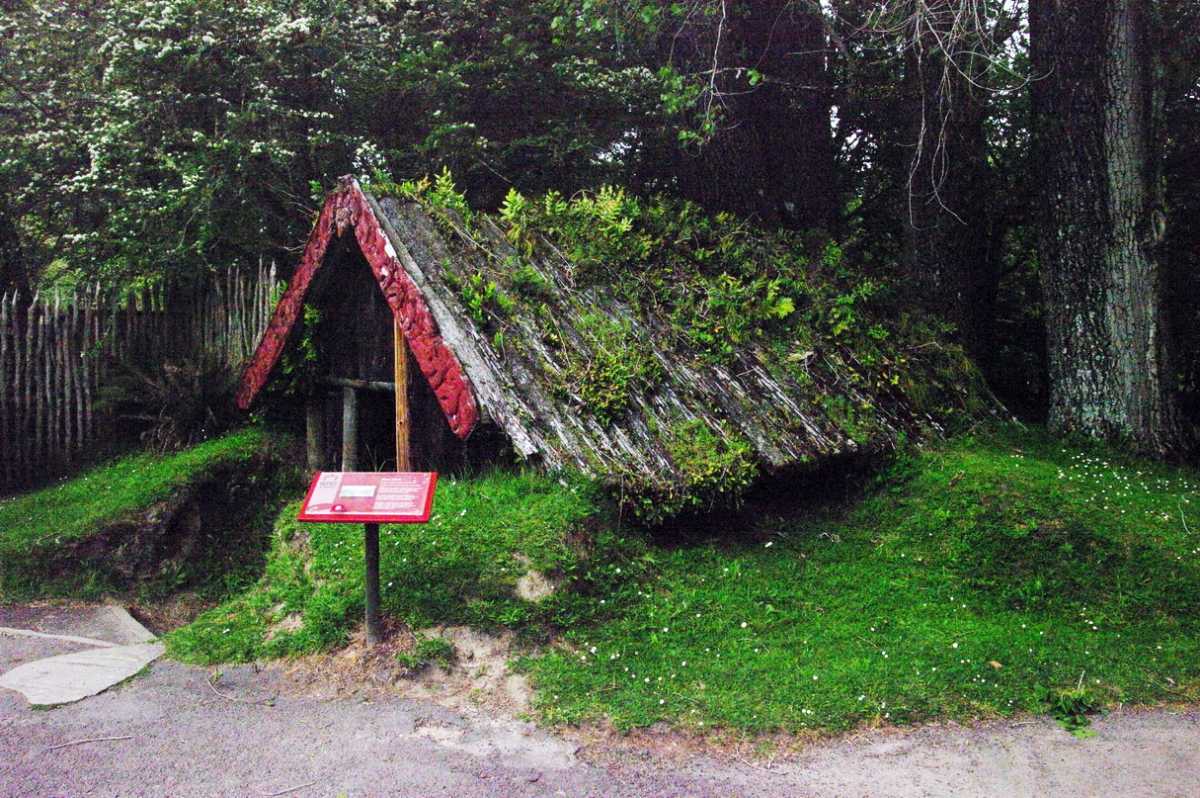 The museum exit leads onto recreated buildings where displays and objects tell the story of Guide Sophia, the blacksmith family, European settler house and a whare (Maori traditional house construction) and others. Then the flat path wanders through bush to park-like grounds where excavated buildings are testament to the power of nature.

The stone storehouse, the waka (canoe) and blacksmith’s workshop show the depth of ash and mud that buried the village. The sheer depth of the now compacted volcanic ash is metres deep.

Te Wairoa River runs through the park. The 30 metre waterfall is a great nature walk. Wheelchair access to the lower falls is not possible due the wooden steps descending Waitoharuru Cliff parallel to the falls. At the lower viewing platform water cascades in a horsetail fan over the cliff top in a diamond light filled spray coating the area in a damp mist. People and the surrounding ferns. Good walking shoes will provide stability in the damp environment and steep staircase to the lower platform. Remember to look into the depths of Te Wairoa stream for rainbow trout who spawn in the vicinity. For those whose fitness levels make the staircase descent a challenge the upper Waitoharuru Valley lookout offers views of Lake Tarawera and through the bush you can listen to the cascading waterfall. 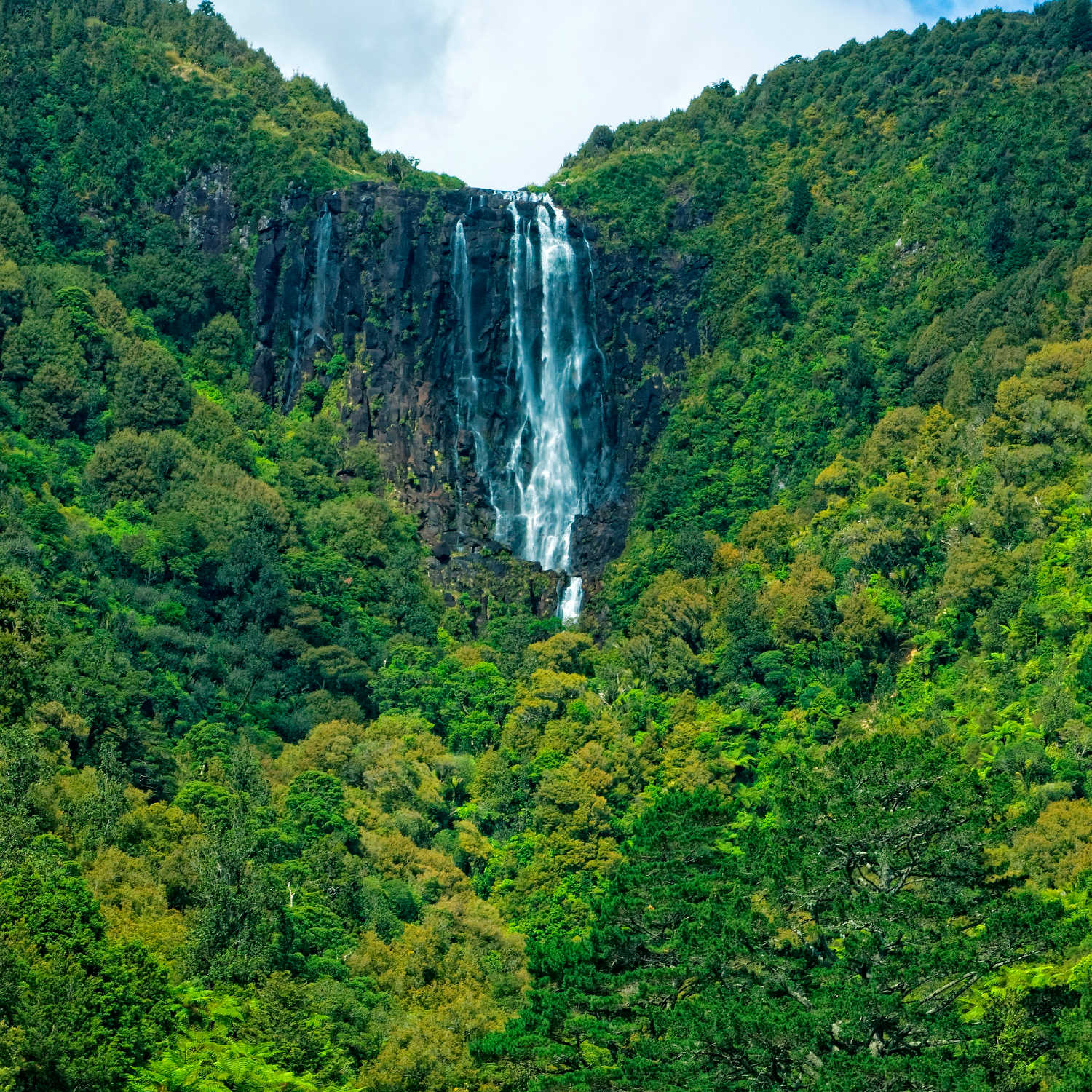 Buried Village is open everyday, from 10.00am to 4.00pm except for Christmas Day. There is an admission fee. For up to date information or for online tickets click here Buried Village of Te Wairoa: Rotorua New Zealand attractions. Allow between 1 ½ to 3 hours.

An excellent gift shop with a number of local artisans and artists marketing their creations. There is an opportunity for visitors to indulge in dress up. Period costumes are supplied for visitors to pose in a recreated sitting room as a photo memory moment.

Guided tours of the site

There are scheduled guided walks throughout the day. You can also choose to explore the area with a self-guided multi-media tour. You are allowed to take photographs in the Museum and the grounds.

Viv’s Cafe offers devonshire scones, cream and jam, muffins, an assortment of hot and cold snacks and freshly brewed coffee for visitors to relax either indoors or outdoors in the garden setting.

Museum, with wide gravel paths around the archeological site navigable. Parts of the park are undulating.  Some excavated sites have steps into the interior.

A 30 minute drive from Rotorua, remember to stop at the scenic lookout on your return to Rotorua to view the calm waters of Lake Tarawera. The Buried Village is on the route to the Blue and Green Lakes. Lake Tikitapu, the Blue Lake is a popular fishing destination.

TIP: You will pass the visitor attraction Redwoods Forest combined with the Buried Village makes for a great day out and about in Rotorua.

Archival audio: An eyewitness recalls the Tarawera eruption lighting up the sky.

Lying 24 kilometres south-east of Rotorua, Mount Tarawera is an unusual looking mountain, with several large domes and a broad, flat top. It was shaped by volcanic activity hundreds of years ago. The Māori inhabitants of the area, and the Europeans who arrived in the 19th century, did not know that Tarawera was an active volcano until 1886, when it came to life in the deadliest known eruption in the country’s history.

Before the Tarawera eruption, the spectacular Pink and White Terraces were considered one of the scenic wonders of the world. The terraces consisted of delicately coloured volcanic rock that formed tiered layers of natural hot pools, where visitors from all around the world would bathe.

There were few warning signs that an eruption would take place, though there was a sudden and unexplained rise in the level of Lake Tarawera, and a rise in thermal activity.

Our guide pointed out that the mud from one of the geysers had been projected fully 25 yards from the crater quite recently, for it was soft, and all this was pointed out as quite unusual. I could not judge if the activity was greater than usual but on arriving at this terminal point in our expedition I began to feel uneasy and to realise a sense of danger connected with all around me.

Then 11 days before the eruption, both Māori and European visitors, including the famous Guide Sophia, reported seeing a ghostly Māori war canoe paddling across Lake Tarawera. Guide Sophia consulted her tribe’s tohunga, or priest, Tūhoto Ariki, and he interpreted the phantom canoe as a bad omen. He believed Māori would be punished for exploiting the area for money without paying due respect to their ancestors.

In the early hours of 10 June, Tūhoto Ariki’s prophecy was fulfilled. Mount Tarawera split apart, spewing forth millions of tonnes of ash and debris. At Te Wairoa village, about 8 kilometres away from the Terraces, people were woken after midnight by a series of violent earthquakes. Around 2 a.m., Mt Tarawera erupted, and by 2.30 [a.m.], fountains of glowing lava and a cloud of ash up to 10 kilometres high, through which intense lightning flickered, were thrust skywards.

At Te Wairoa, more than 60 people sheltered in Guide Sophia’s sturdy hut, which survived the eruption. Later, craters on the south-west side of the mountain blasted open and a crack 17 kilometres long spewed steam, mud and ash. The eruptions finally ended by about 6 a.m.

Earthquakes were felt throughout the North Island and noise caused by the eruption was heard as far south as Blenheim. Aucklanders thought it was distant cannon fire.

The next day, the skies around Mount Tarawera were pitch black. Rescue parties found a number of small settlements had been completely destroyed or buried. The tohunga who predicted a calamitous event – Tūhoto Ariki – survived the eruption and was dug from his buried house after four days. He died several weeks later. Over 100 local Maori died in the eruption.

The Pink and White Terraces vanished. Their former site became a 100-metre-deep crater that eventually filled with water to form a new much larger Lake Rotomahana. In 2011, some of the old Pink Terraces were apparently discovered by sonar, lying at the bottom of this lake.

Te Wairoa is today known as the Buried Village. Excavation has revealed the extent of the settlement that developed as a result of tourism to the Pink and White Terraces. The village had a flour mill, houses, a hotel, schoolhouse, and several other buildings. 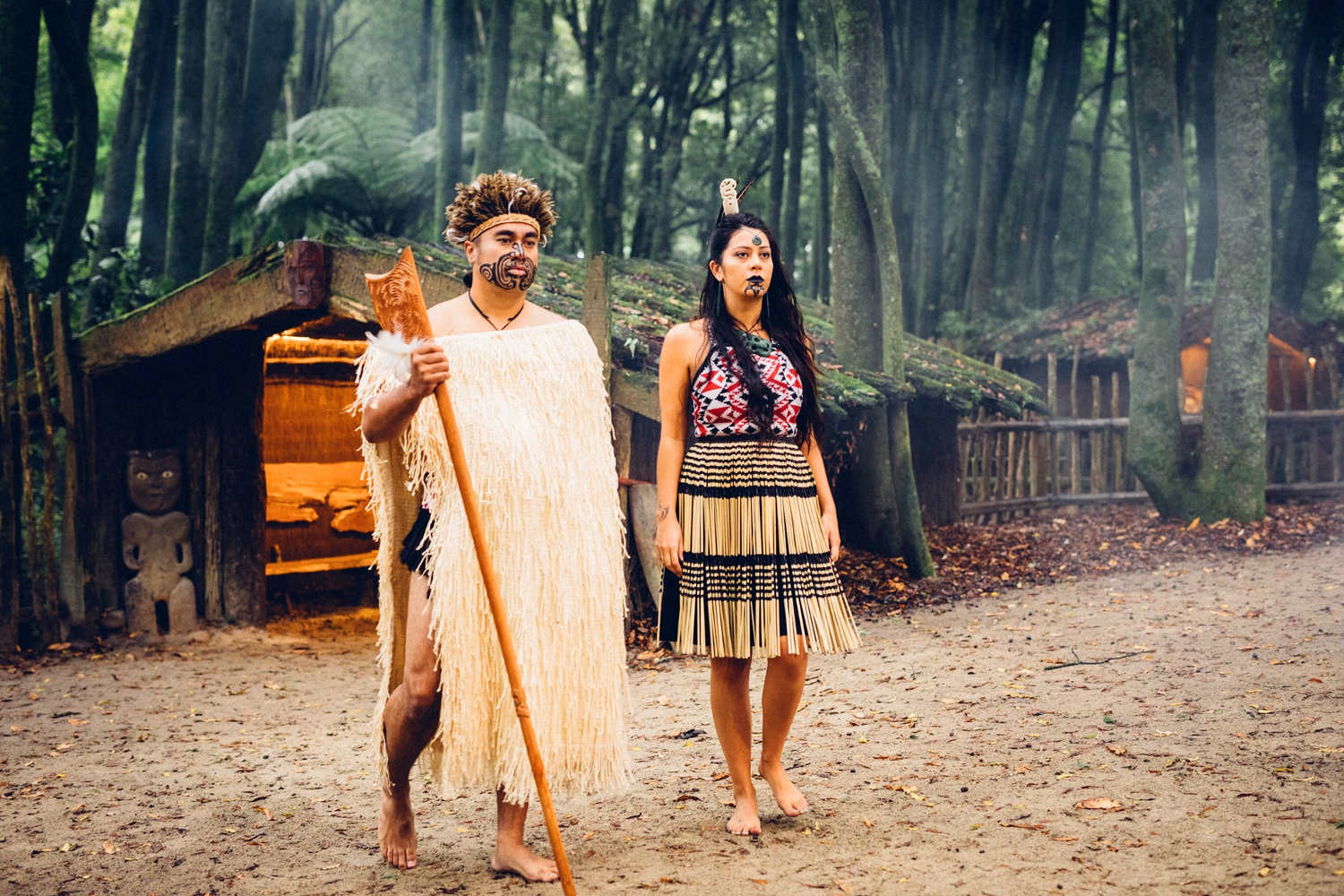 A day in Rotorua, the best things to do in 12 hours 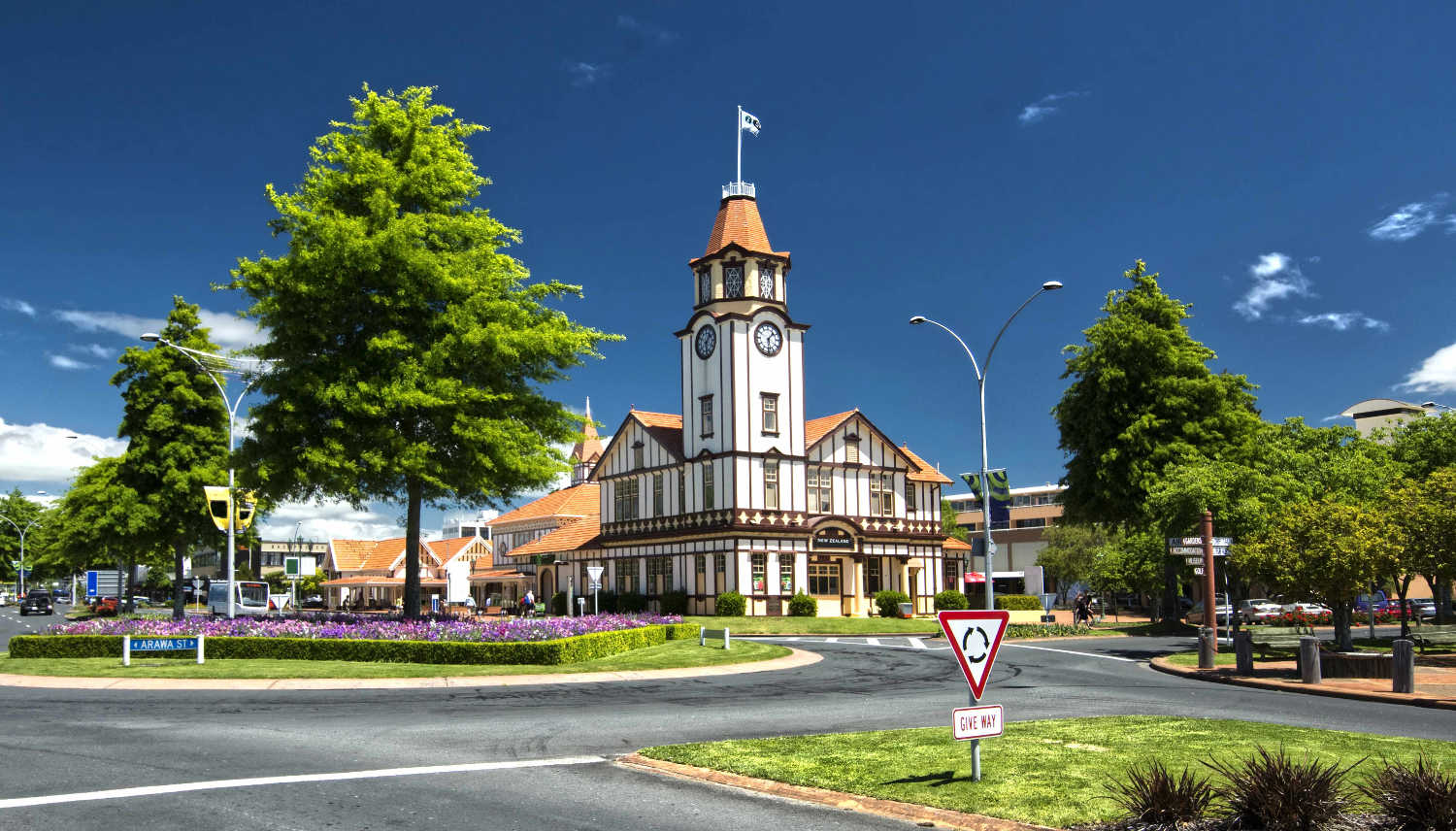 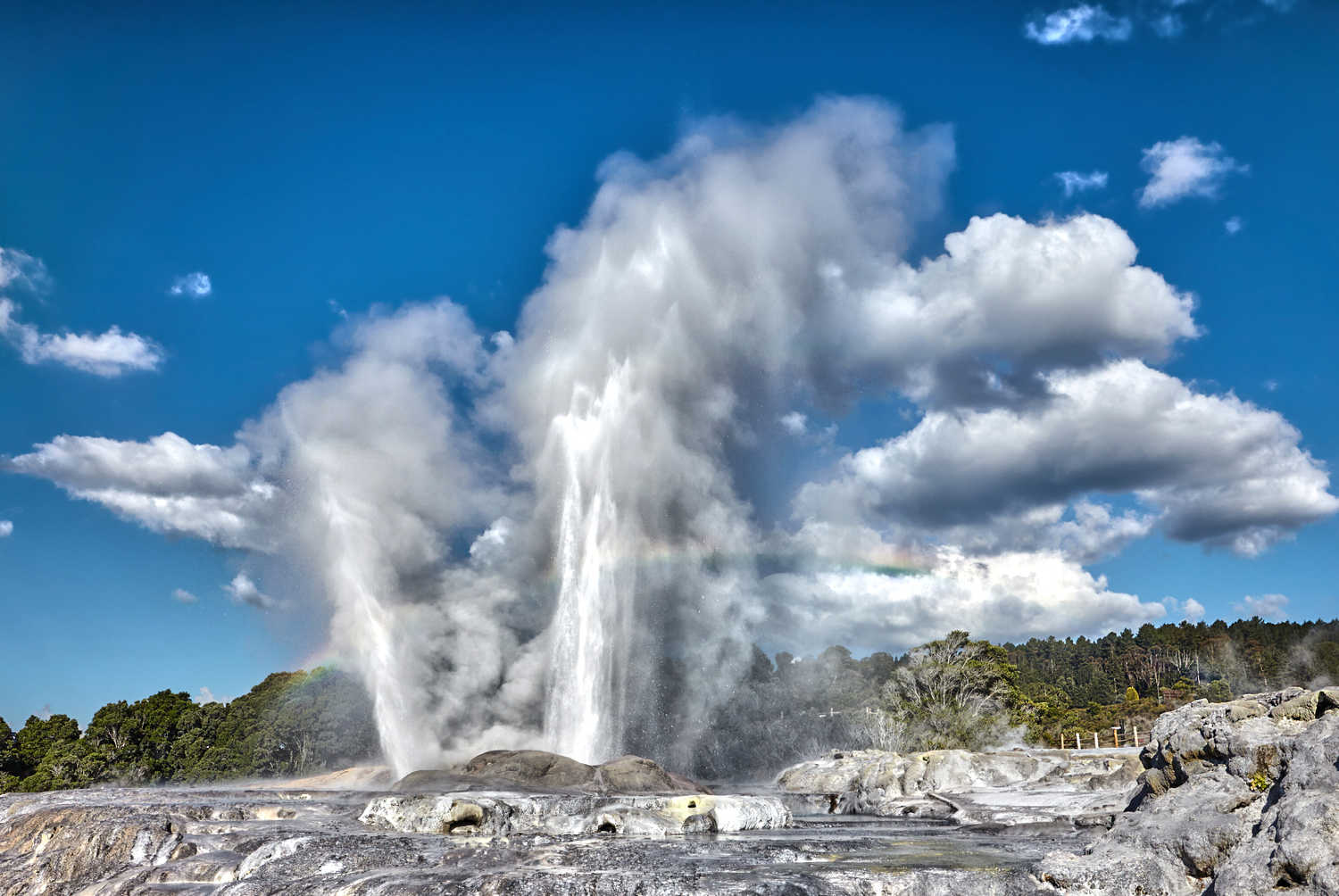 What do you think about “Rotorua Buried Village”?