Want a holiday that is sustainable and supports conservation? Northland has places to visit where visitors will feel positive about the impact of people on the environment. It’s a holiday, from your routine with a difference. Give nature a helping hand. Donate, visit and support people who care.

Northland, a balmy sub-tropical climate, the powerhouse of modern New Zealand is a popular holiday destination. 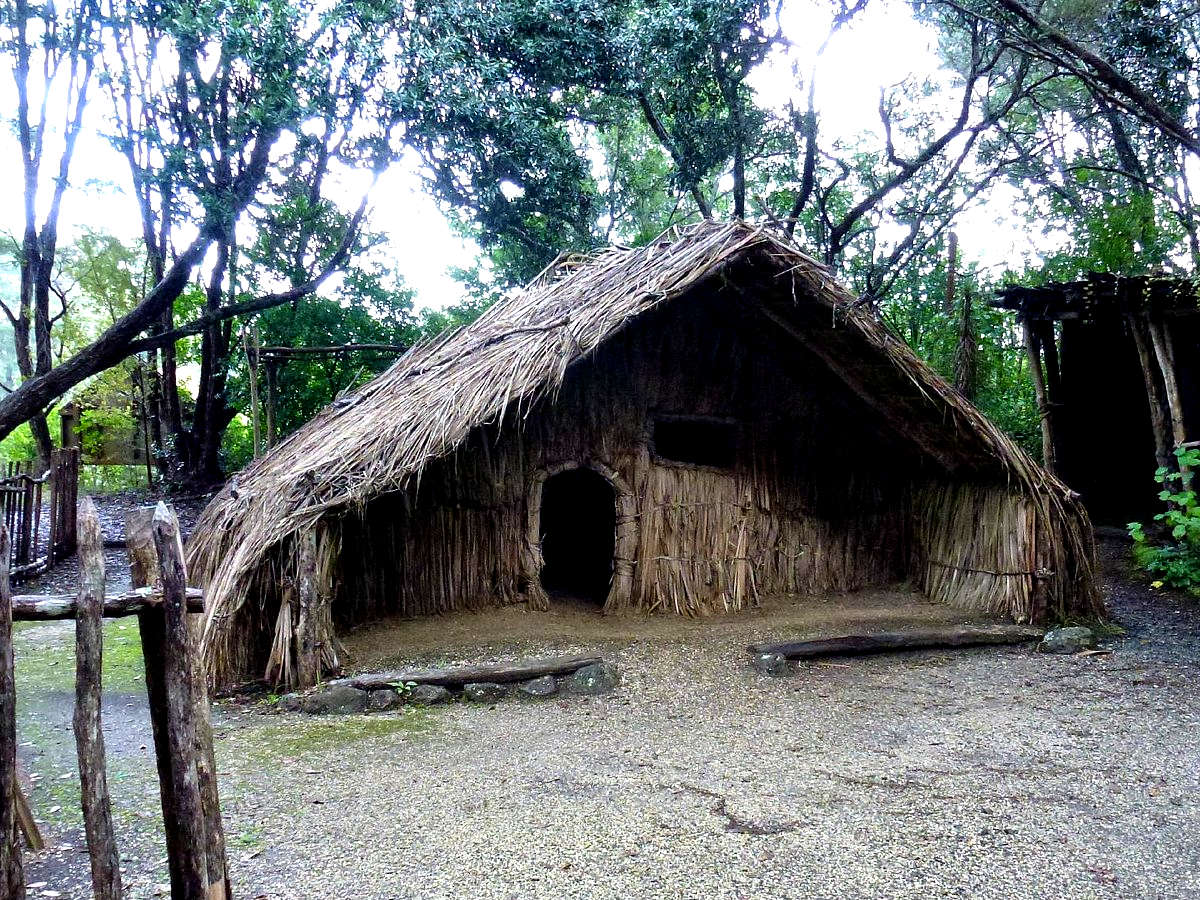 Welcome to Ecocruz, the original Bay of Islands multi day sailing cruise – enjoy the Bay the way the locals do. Join the friendly crew and discover the Bay of Islands Maritime Park on a 3 day/2 night sailing adventure aboard the Manawanui, a 22-metre ketch. This is a down-to-earth nature cruise, taking you off the beaten track to give you a real taste of the marine environment and the beautiful landscapes of this unique coastal region in the Far North of New Zealand. 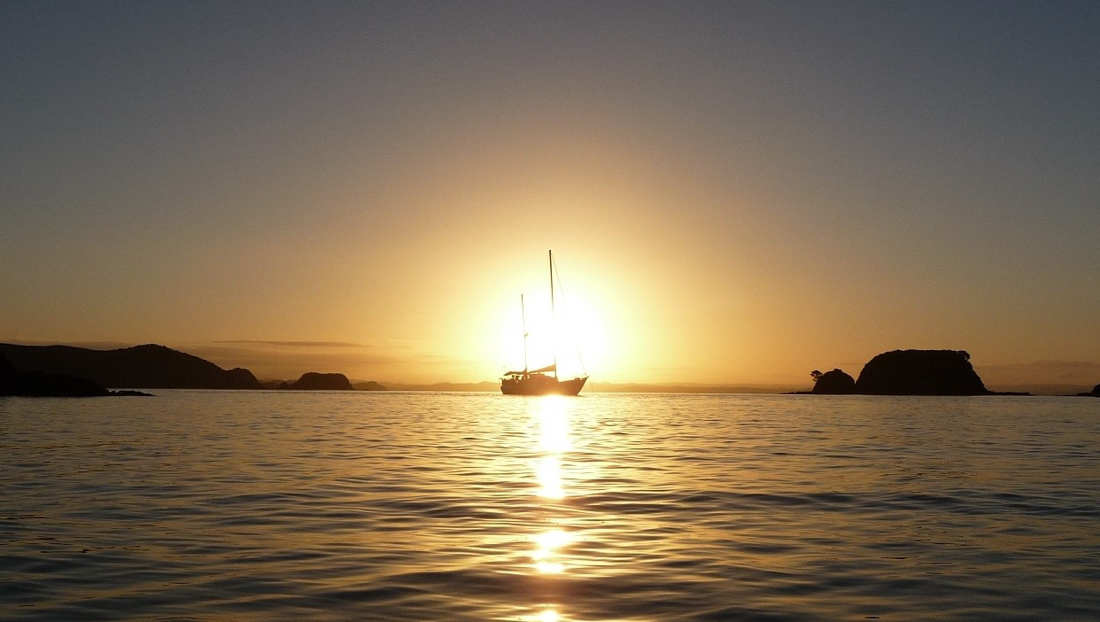 Discover the wild side of the Bay of Islands 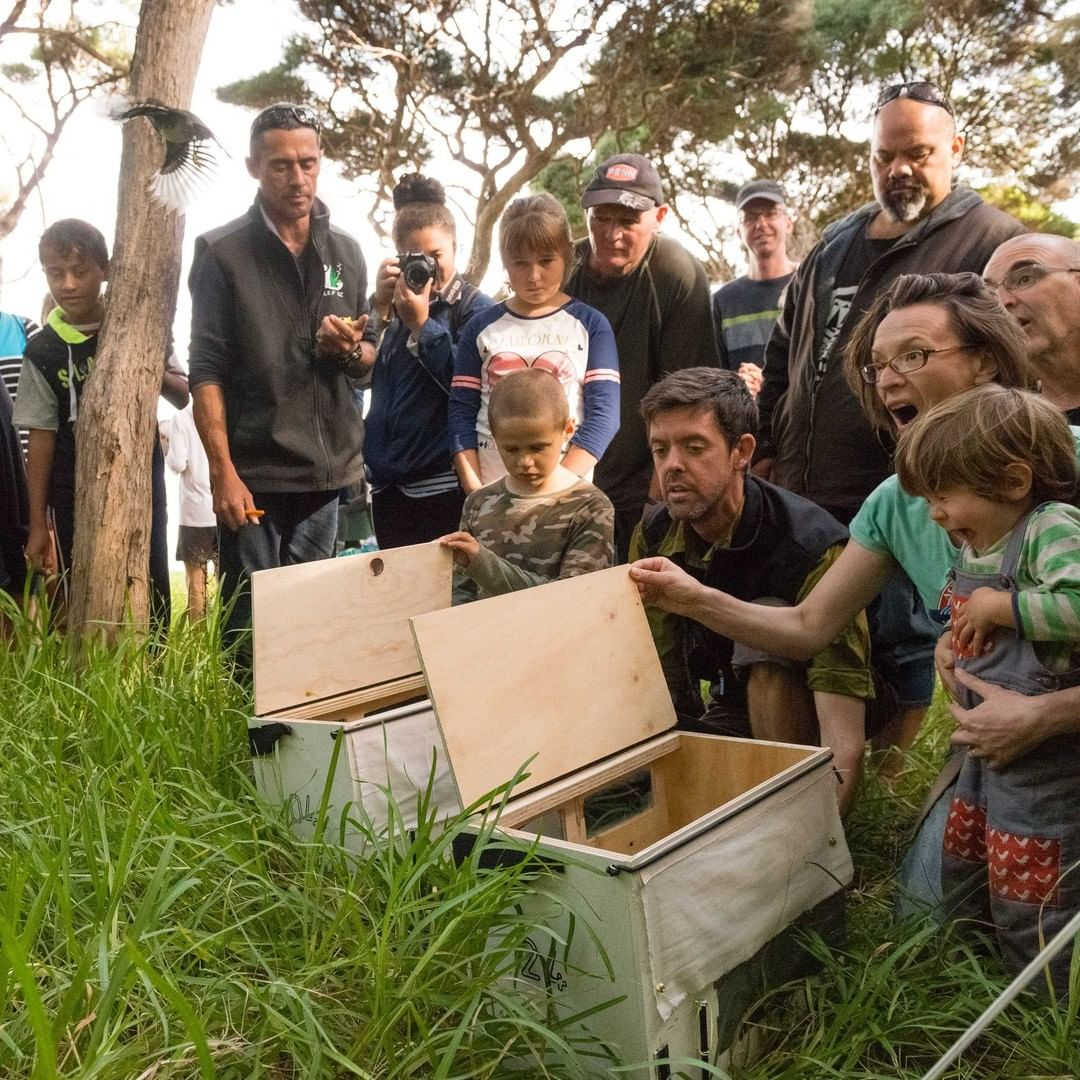 In 2009, Project Island Song removed all invasive pest mammals from these island sanctuaries, and now native birdsong is returning to the Bay of Islands – note by note. When you visit Otehei Bay, Urupukapuka Island, pop into the Conservation Centre to gain an insight into Project Island Song’s work.

Here you will learn how they protect and restore the unique natural habitat and wildlife on these beautiful islands, and will understand why the Explore Group is so proud to support Project Island Song. There are 5 native rare bird species that have been reintroduced by Project island Song since 2009: here is their list. 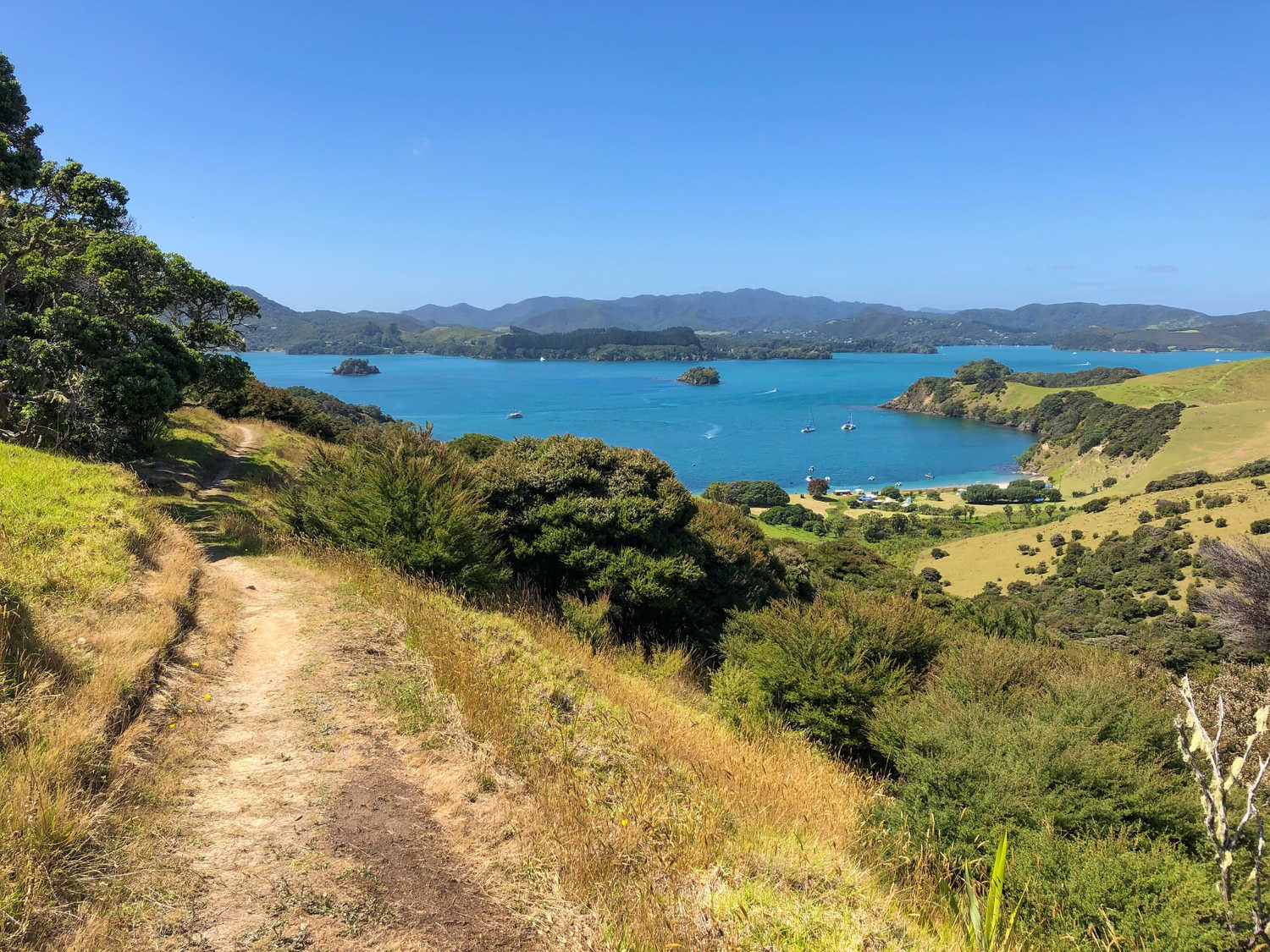 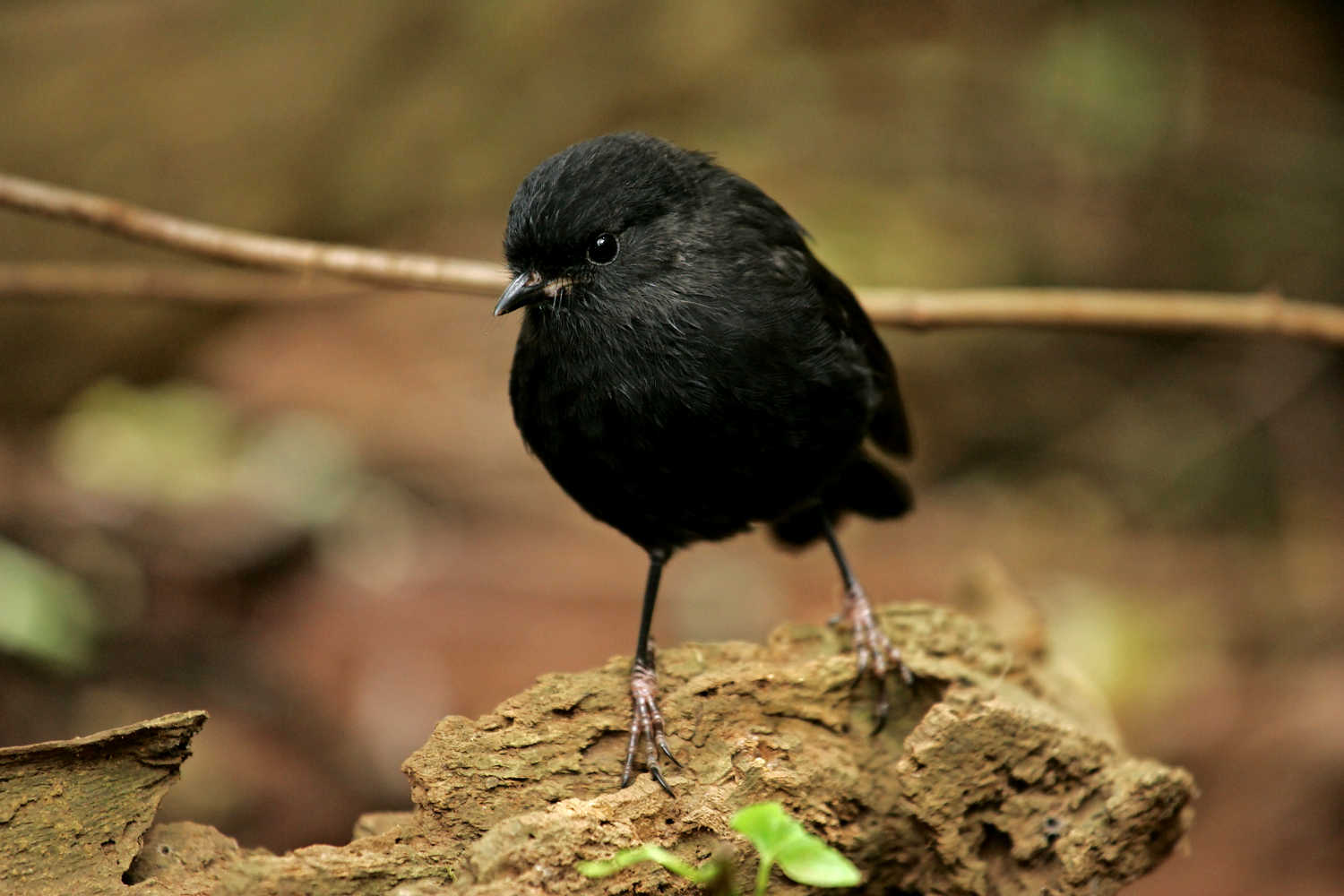 A bright chattering bird that has been extinct on the Mainland of Northland for several decades. You may spot them by noticing how their flight seems erratic when they fly across open spaces. They are medium in size with beautiful green mixed with crimson red colouring.

When you see one – ever so comfortable on the ground and fitting lightly in the underbrush – you will understand why they are no match for cats! These birds are slightly larger than a house sparrow, are grey in colour and love coming close to people! Listen out for them between August and December as that is when the male Robins are their most vocal, especially in the morning.

Member of the ancient Callaeidae family that are only found in NZ (all other Calaeidae species are now extinct or endangered). They almost became extinct with just 400 birds left on one island. Now thanks mainly to reintroduction’s onto predator free islands, their numbers are upwards of 7000. These beautiful birds are mostly black apart from some chestnut areas, and have a orange/red wattle. To identify their bird song, listen out for something that sounds like “cheet, te-te-te-te” or “ti-e-ke-ke-ke-ke”.

Extinct in the Northland region for over 100 years, the Pōpokotea / Whitehead is thriving on the islands. These small songbirds have a compact body, short tail and long legs and are often heard before they are seen. They are mostly brown with a white/grey head – giving them their name. They are very chatty, but they are mainly identified by a characteristic “viu viu viu zir zir zir zir” twitter. 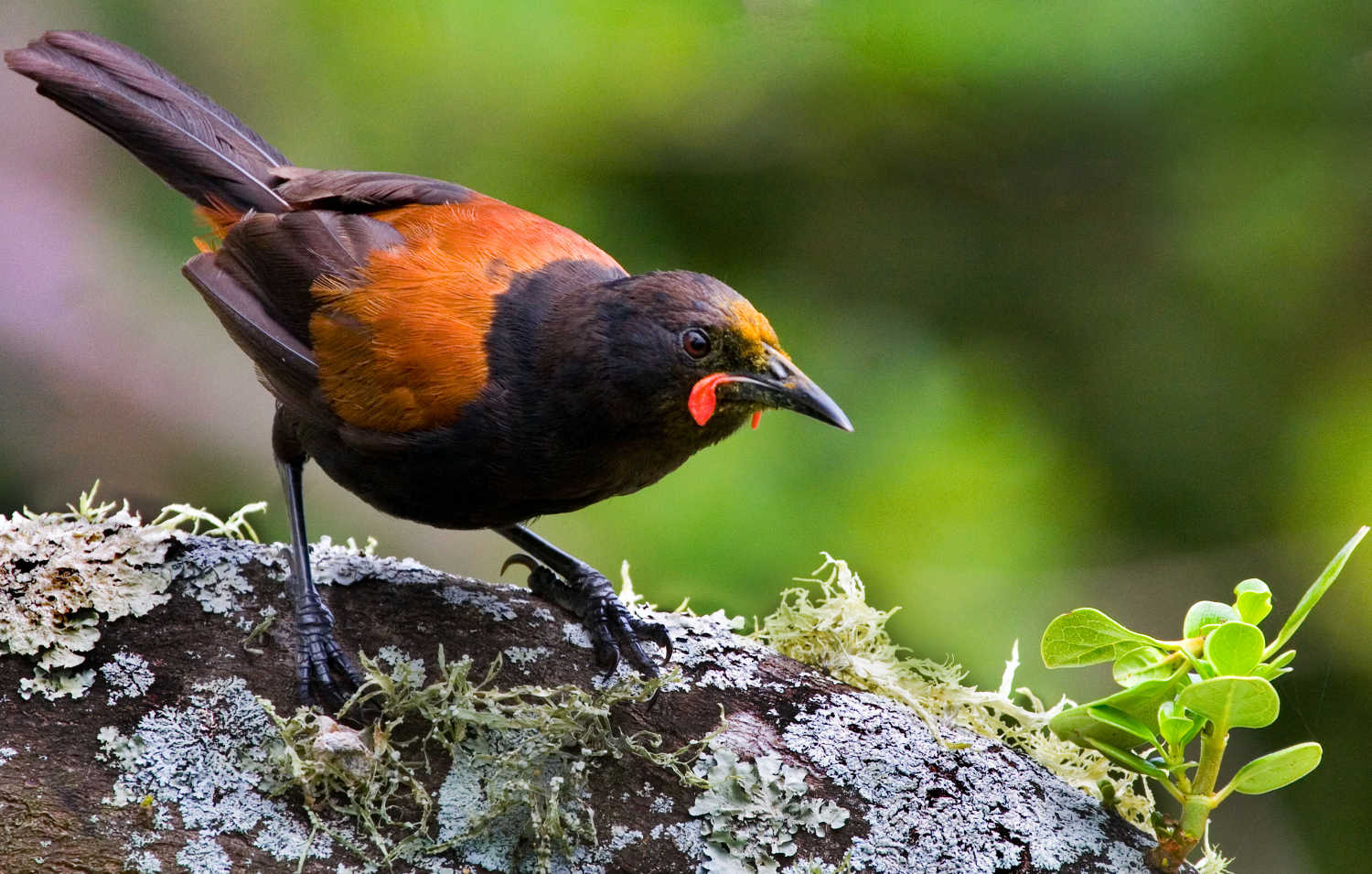 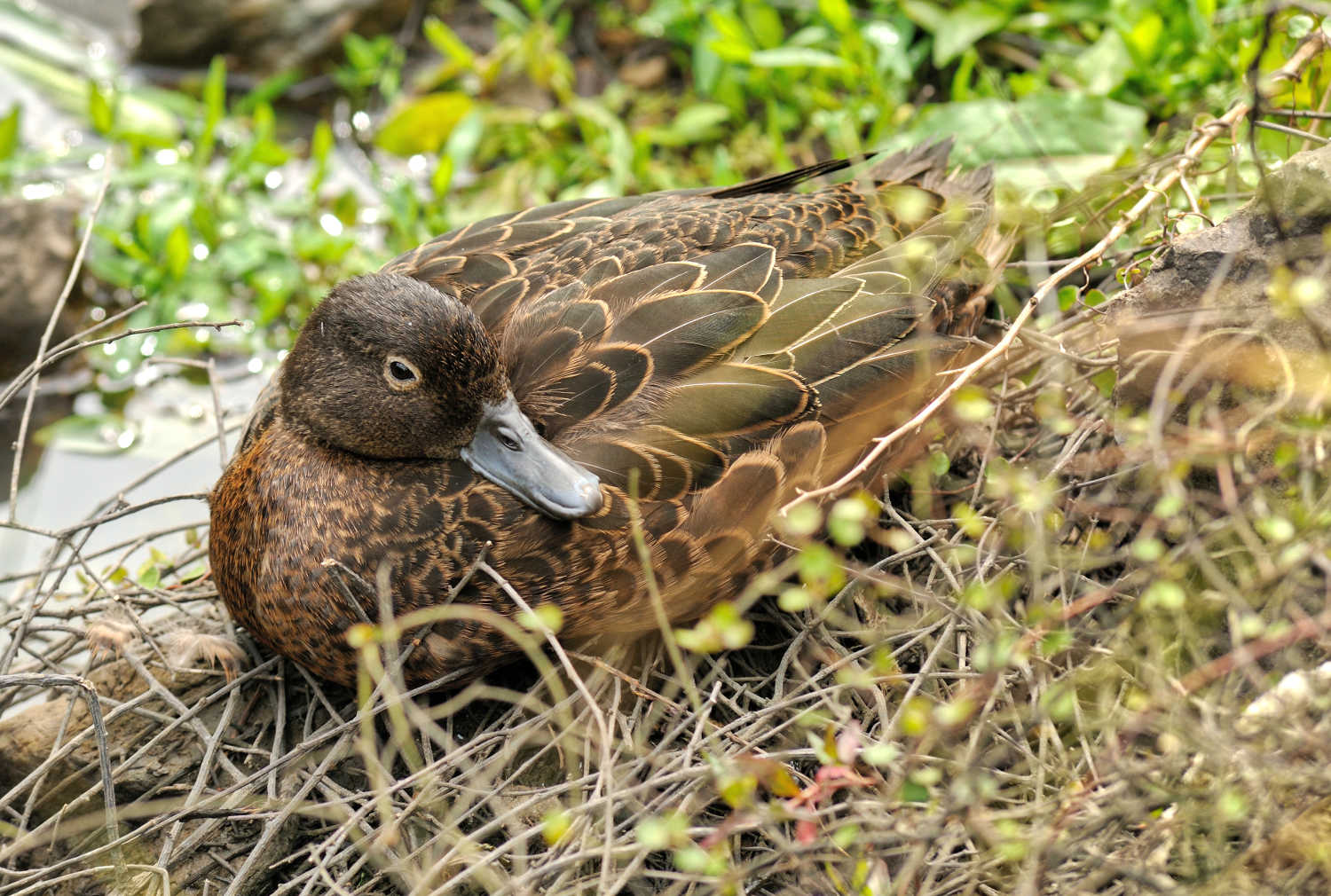 There are only 2,500 of this shy endemic waterfowl alive, at the most, and they New Zealand’s rarest waterfowl. Both sexes of Brown Teal are a dark brown, and have differing features depending on the gender. Males are the more aesthetic, whereas females and juveniles are a uniformly dull but dark mottled brown. Their calls differ depending on their sex as well, male calls are soft, usually described as trills or piping. The female has a rasping growl and a high-pitched and fast quack.

Bay Bush Action’s purpose is to reduce pest numbers in the Opua State Forest and create a healthier biodiversity with the aim to eventually reintroduce threatened species into the area. You can support them by sponsoring one (or several) of their traps that catch destructive introduced pests.

In 2019, we embarked on an ambitious project to protect a further 250h of the Opua Forest.

We are currently running a 250 hectare field trial of the NZ AutoTraps AT220. The trial has more than 500 traps protecting our native toanga and forest canopy. Our report of how the trial went will be out in Feburary 2021.

If you would like to support one of the traps in the trial please use the donate button below. 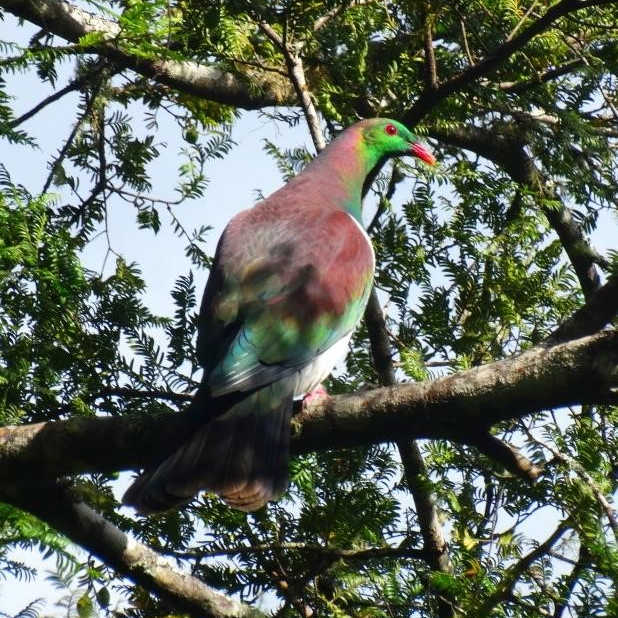 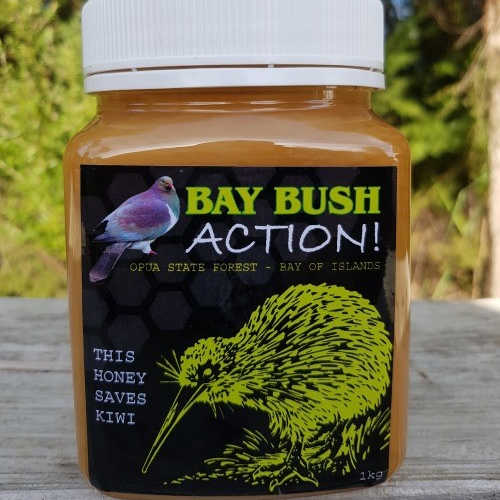 Buying this tasty kānuka honey means you are helping save a forest.

100% of the profits of this honey will be used to help Bay Bush Action Trust protect the forest and the kiwi that live in it.

Purchase online (+$6 postage) or pick up from ITM Bay of Islands.

New Zealand has a small resident population of around 200 orca (killer whales). The Orca Research Trust founder Ingrid Visser has dedicated her life to the protection of orca and their habitat through conservation, education and scientific research. Ecocruz supports the Trust through providing scientific data as well as logistical support.

Fish Forever. The Bay of Islands sparkles on the surface, but underneath life is in trouble. The teeming marine life that greeted past generations is now a shadow of its former self. There are many things we can do to reverse the decline. Let’s all make changes on the water and on land that will help to rebuild what we love. Future generations must be able to enjoy Tangaroa’s abundance. 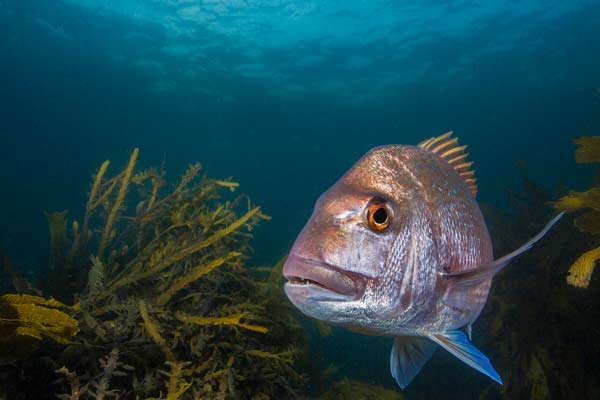 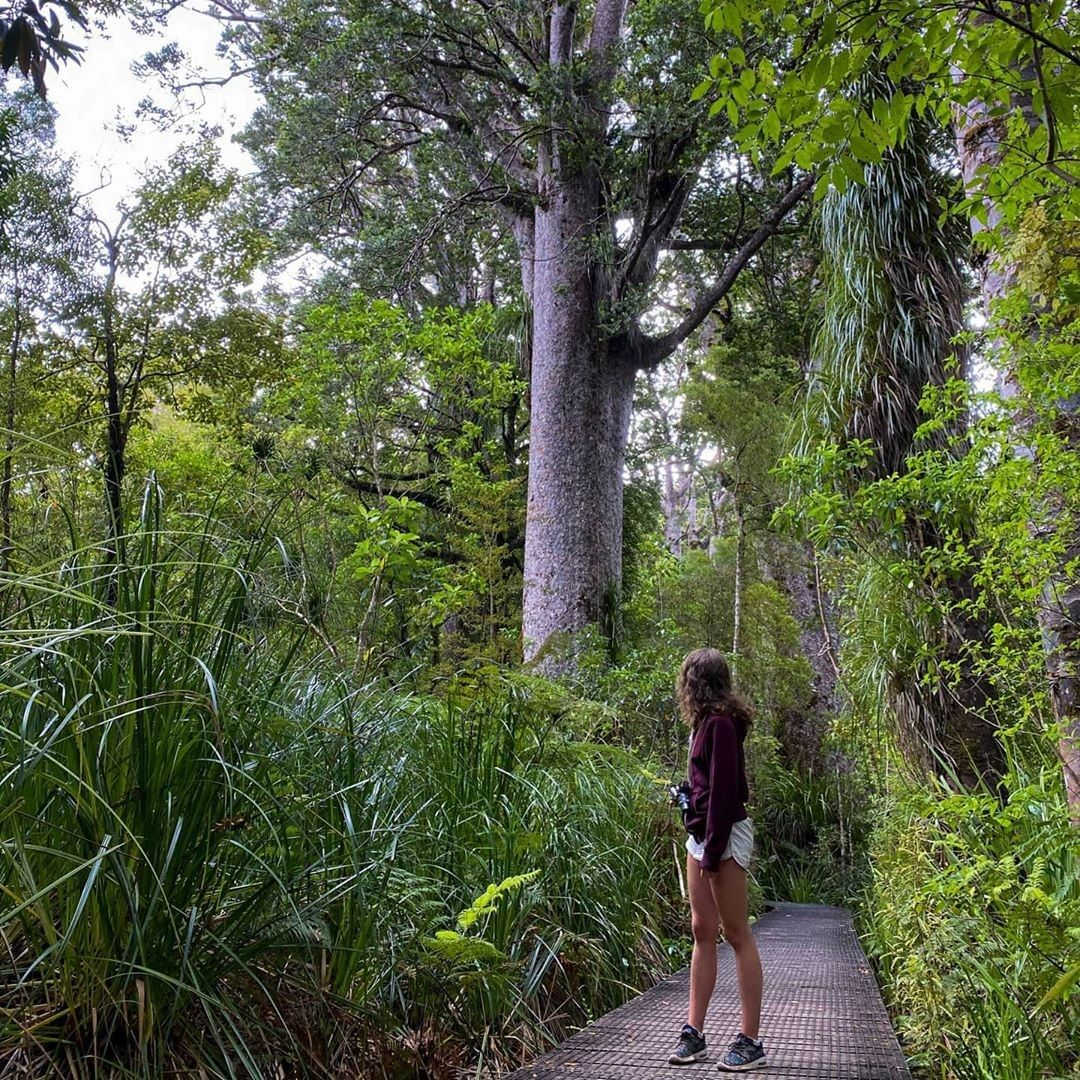 One of New Zealand’s tallest trees, standing at 46 metres is the treasured Tane Mahuta (‘Lord of the Forest’), found in Waipoua Forest in the Hokianga region. It’s not too far from the Bay of Islands and makes a great day trip. Join the ‘Footprints Waipoua Tour‘ for a great guide to the native Kauri and other wonders of nature in Northland.

Underneath trees in both dense and light bush areas you will observe a storied undergrowth of mosses, lichens and ferns. Many Department of Conservation walks have information plaques throughout the walks describing the flora and fauna. Trees have individual ID signs naming the tree and its traditional uses.

For a detailed understanding of medical uses and herbal use of native foliage a great way to find out is Rewa’s Village. Situated in the picturesque Kerikeri basin alongside historic Kororipo Pā (Hongi Hika’s fortified enclosure), the Kerikeri Stone Store, and Mission House, Te Ahurea is an interactive pā site that will transport you back in time. For opening hours check Te Ahurea. A visit to the heritage replica village combined with Kerikeri combines a love of scenery, the forest and an understanding of the connections Maori and New Zealanders have to their part of the world, Aotearoa New Zealand. 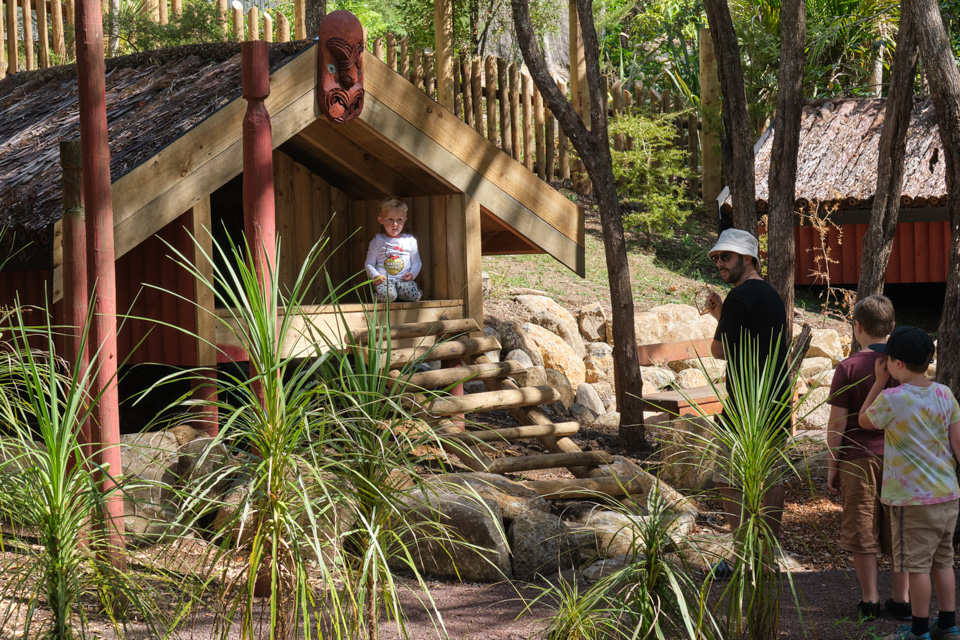 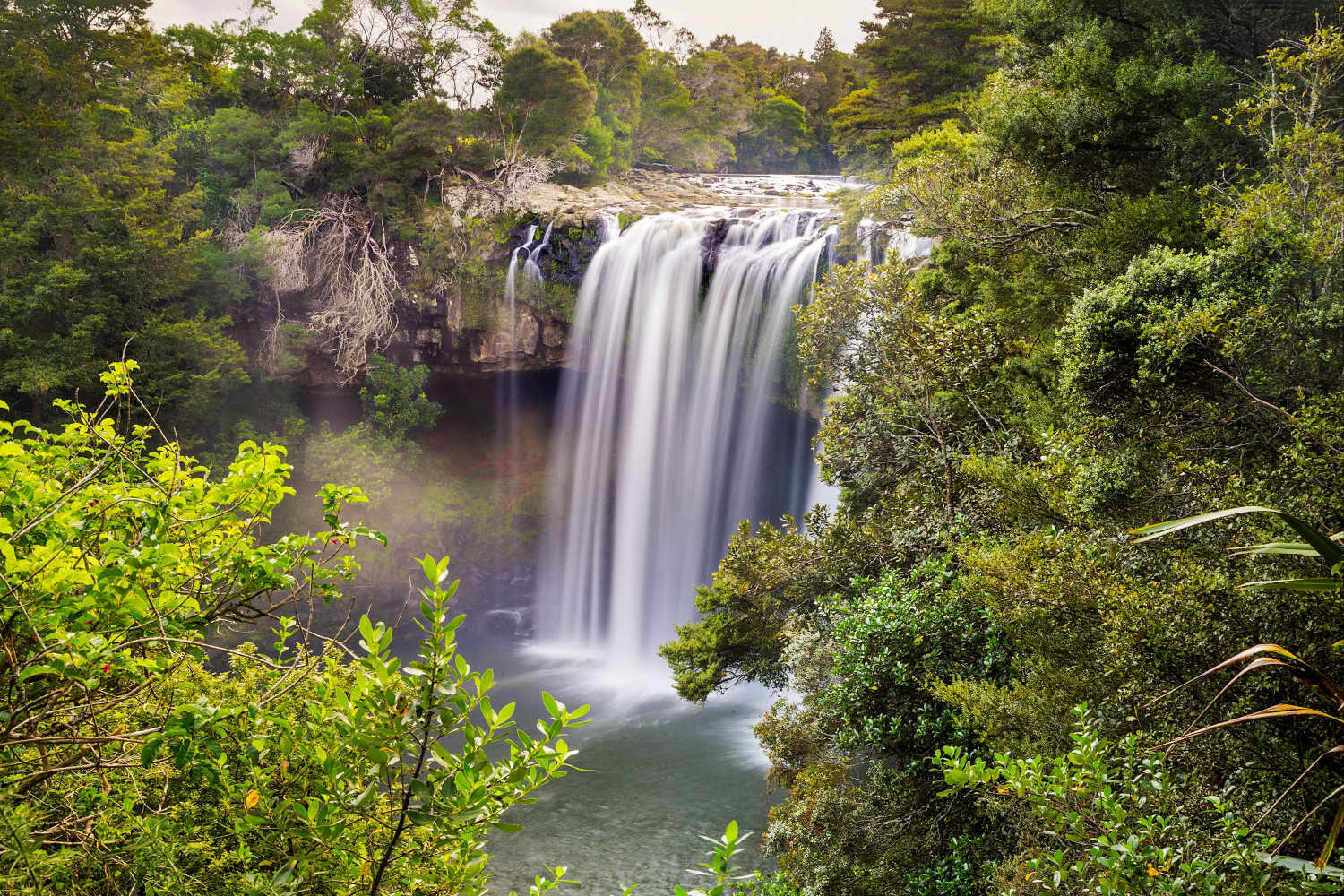 NORTHLAND SHORT WALKS – WHERE THE SCENERY DOES THE ‘TALKING’

Check out Northland family walks and Northland best short walks for a taste of what Northland’s scenery has to offer. Go bush and enjoy a walk off the beaten track or indulge in a leisurely stroll. For further information check out Conservation programmes managed by the Department of Conservation and Best Bits sustainable practices.

Place names come and go, but the land remains. An enquiry from a cousin about the name of one particular headland near his home in Manawaora Bay, Bay of Islands, started Murphy Shortland on a five year quest to record the pre-European names of the eastern Bay of Islands. The result is a map which he has called Ipipiri, a name used by the Maori to refer to what Captain Cook named the Bay of Islands.

When Murphy realised he did not know many other traditional names in the area besides that of the headland, he started to piece together a jigsaw of half-forgotten information. Most of the place names he has re-discovered have at least four separate provenances: Turton’s land claim deeds; old Lands and Survey maps; Land Court minutes; and the memories of local people. Murphy noted that many land sales in past years referred to boundaries, which were determined by looking at the land from the sea. “The land deeds name all the landmarks in succession as the eye moves. Nine times out of ten it appears the Maori sold their land from a boat, pointing at peaks, valleys and waterways.”

SOURCE Ipipiri – a historic map of the Bay of Islands and what a beautiful gift … check out the Russell Museum where a copy is on display.

Northland Charitable Trusts contributing to looking after the environment:

Ipipiri – a historic map of the Bay of Islands 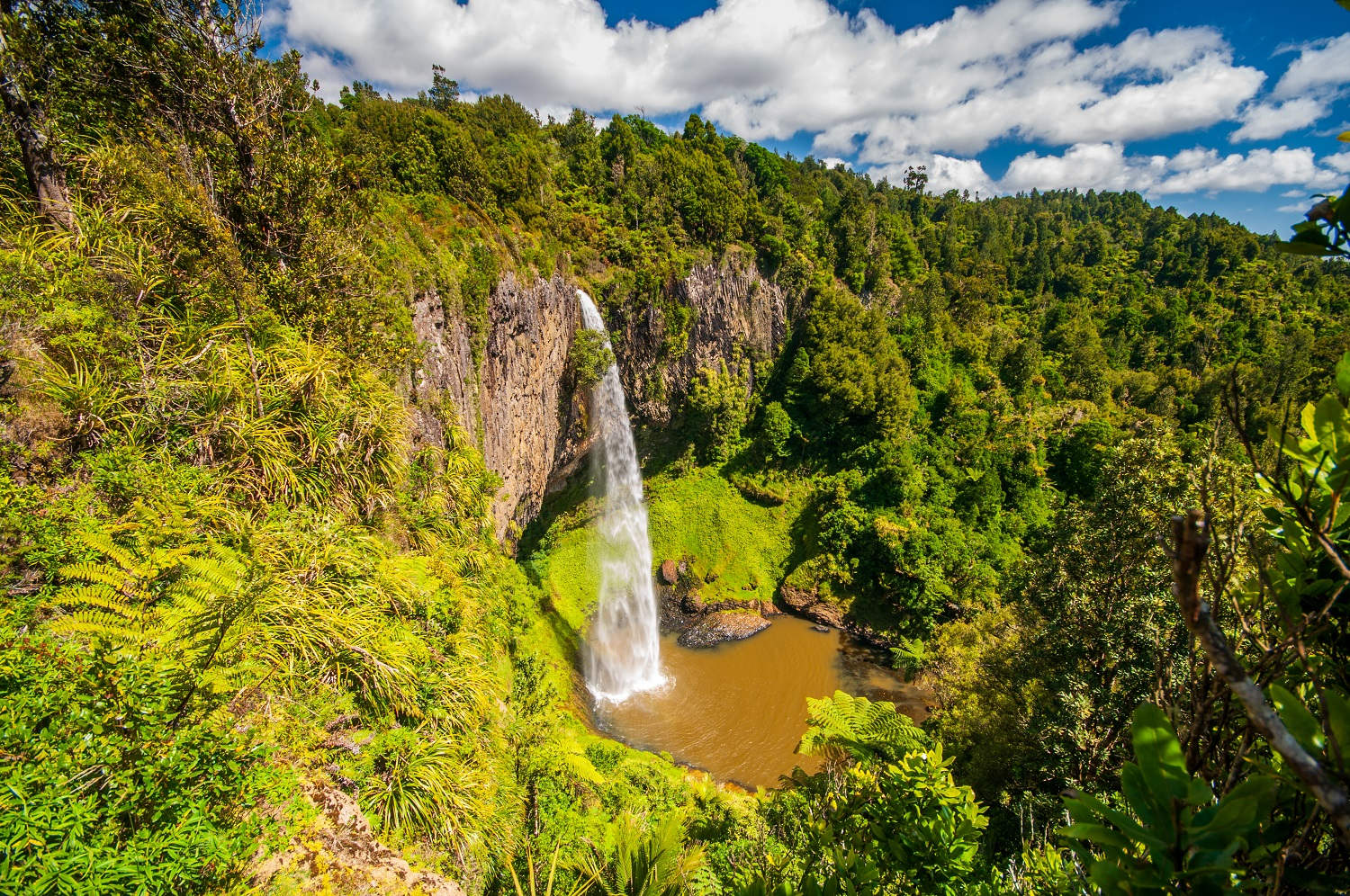 What do you think about “Wildlife, conservation, responsible holidays in Northland, New Zealand”?