Waitomo Caves, beyond the tourist circuit, what to see and best things to do

What to do nearby Waitomo Caves

New Zealand tourist circuits invariably include Waitomo. Black water rafting or a boat trip on the underwater river systems. The caves are well lit with professional guides enhancing the visitor experience. Yet to scoot back to state highway three is to miss the raw beauty of the west coast and beyond.

Here’s a road trip around the Waitomo district… Where does the road go beyond Waitomo? Te Anga Road leads to the west coast. The road is less travelled and a genuine backwater destination.

Starting in Kawhai is a loop road trip following the coast terminating in Te Kuiti. The entire route would take several days including all stops. There are several camping grounds and numerous airBNBs in the district. Motels are largely located in Otorohanga or Te Kuiti. Some of the attractions are dead ends making for a journey with added charm or perhaps the thought, why on earth are we going there. You will not know the answer until you’ve checked the place out. 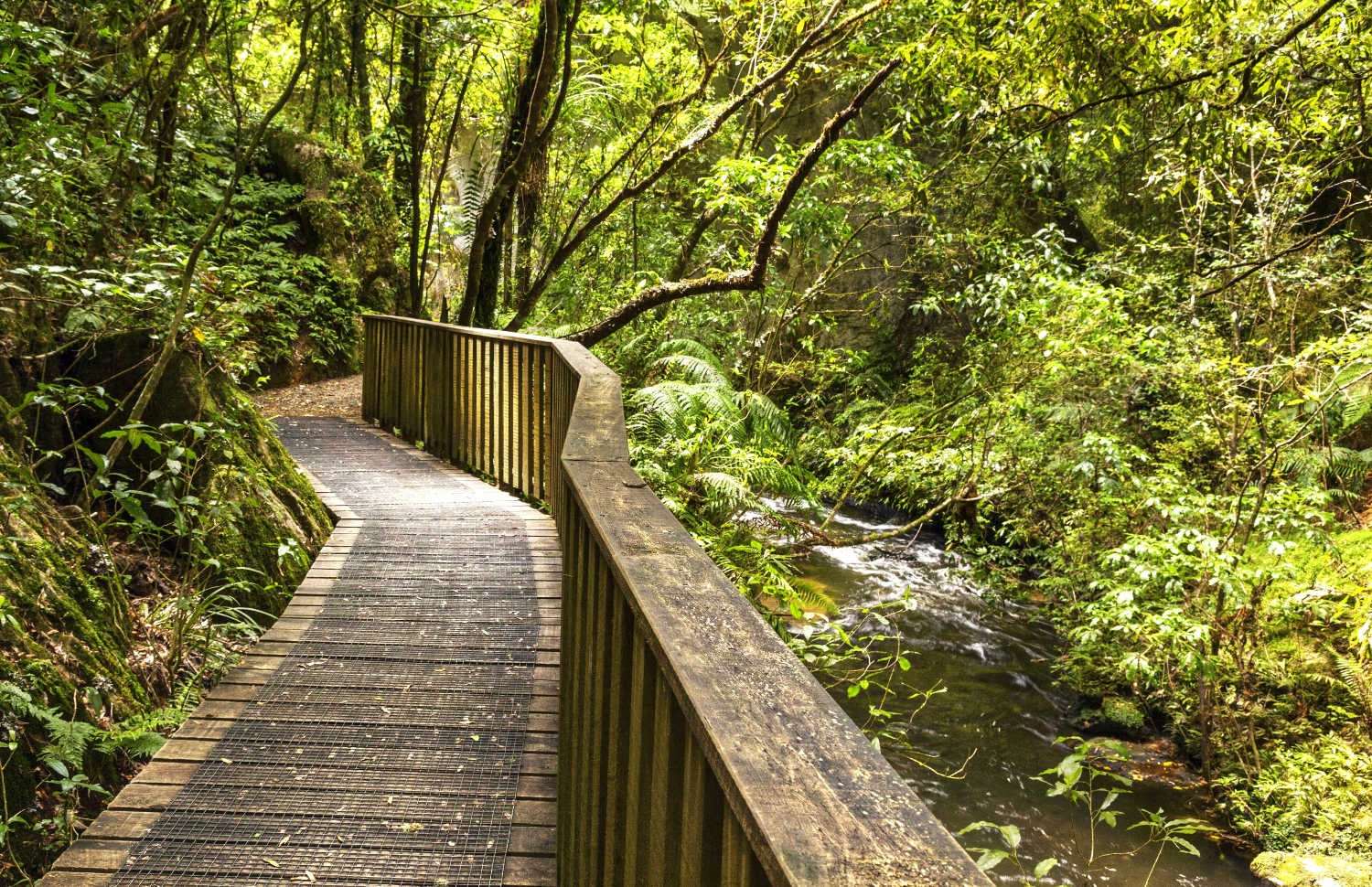 Mangapohue Natural Bridge is one of the most spectacular sights in the Reserve. The 17 metre-high limestone arch which spans Mangapohue Stream is the remnants of an ancient cave system. The short walk is reminiscent of where goblins and fairies might live. It is a great walk for kids.

The 30 metre high falls are phenomenal and while readily accessible not on the tourist circuit. The impressive waterfalls are located in Tawarau Forest. The short loop track leads to a platform overlooking the base of the falls. There are benches along the walk to rest and take in the nīkau and tawa forest. The waterfalls are a classic block cascading waterfalls over a series of rock ledges. The height of the falls is approximately 35m. The constant spray and mist from the volume of water creates a satisfying damp environment with moss and flourishing vegetation thriving in the surrounding area. The platform can be slippery and care is needed. 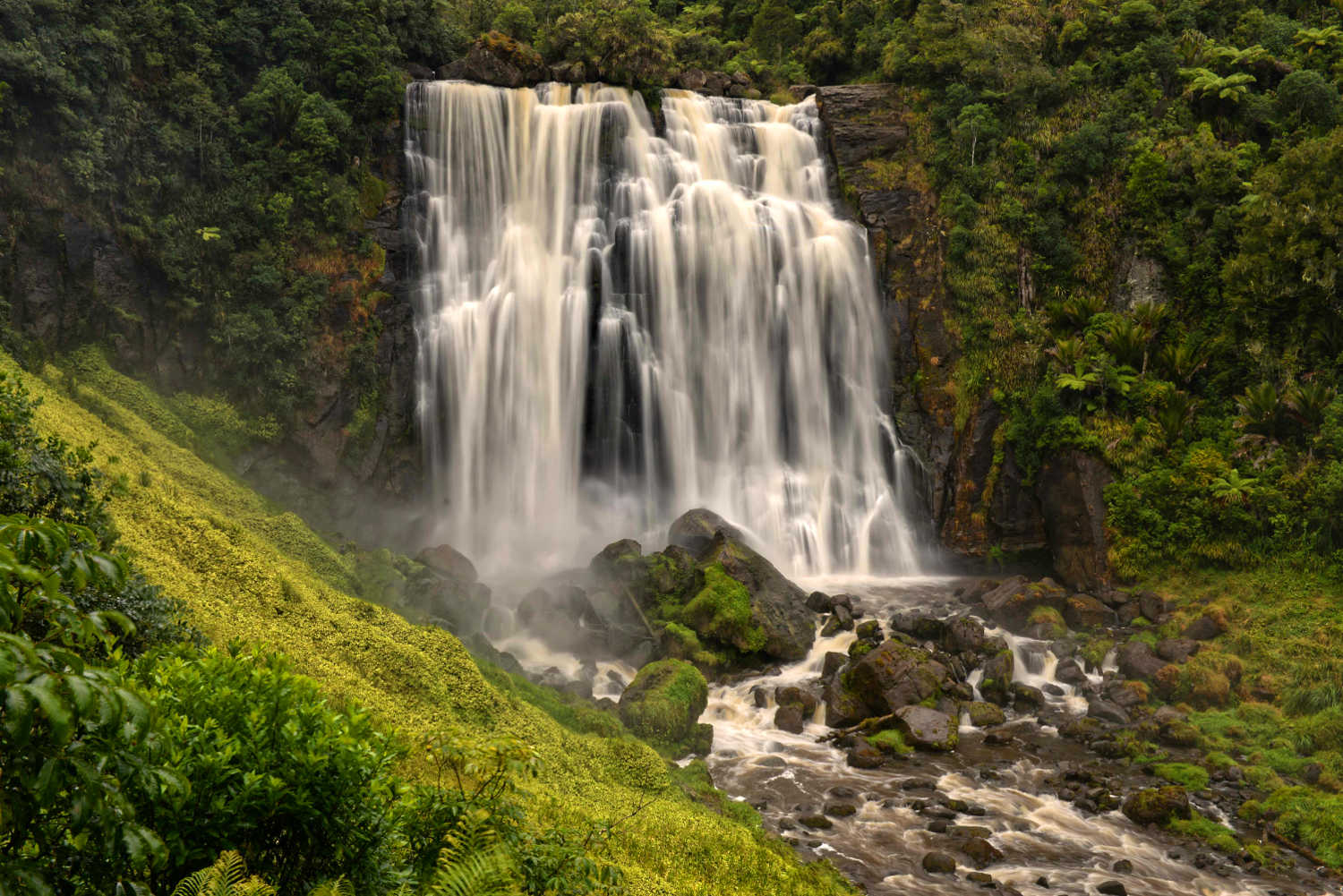 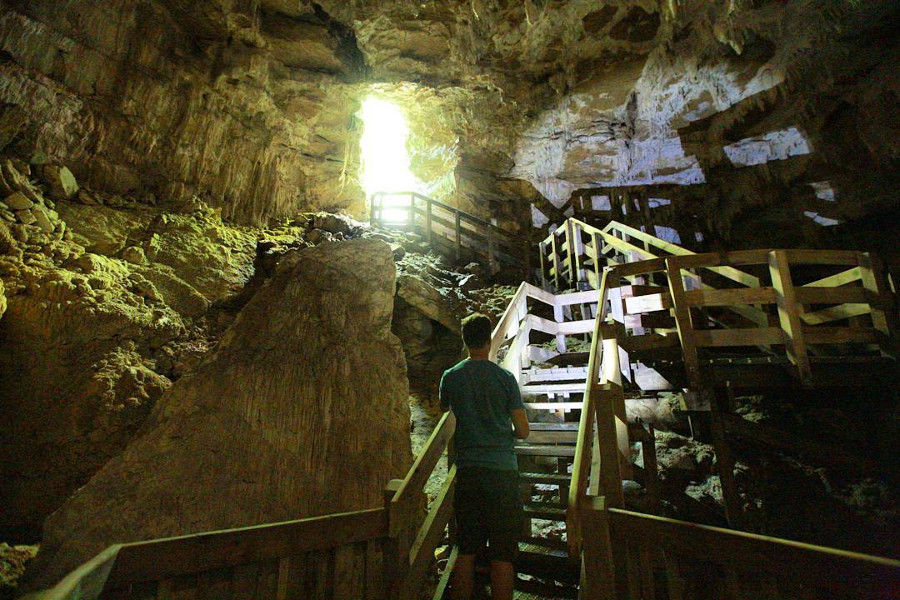 The caves are open to the public with free access. There are layers of enormous oyster fossils with a plaque helpfully describing where to look at the back of the cave. The cave is a self-guided walk. It is a relatively small cave and definitely does not have the glamour of the Waitomo Cave system.

Kids will feel like a caving explorer. There is a Department of Conservation boardwalk and signage.

Sandstone cliffs are tinted with orange, yellow and creams. The beach and headlands remind visitors that there are places where people are few and far between. Waikawau beach is raw, elemental and wild. You feel like an adventurer especially after the journey to the location. The tunnel opens to iron black sands, sandstone eroded cliffs, piles of driftwood and the constant surge of the sea relentlessnessly pounding the sand.

The cliffs are wind and weather beaten with crumbling rocks littering the beach. Care is needed and do not get too close to the cliff faces. The beach is only accessible at low tide. High tides bring the surf close to the eroding cliff faces. 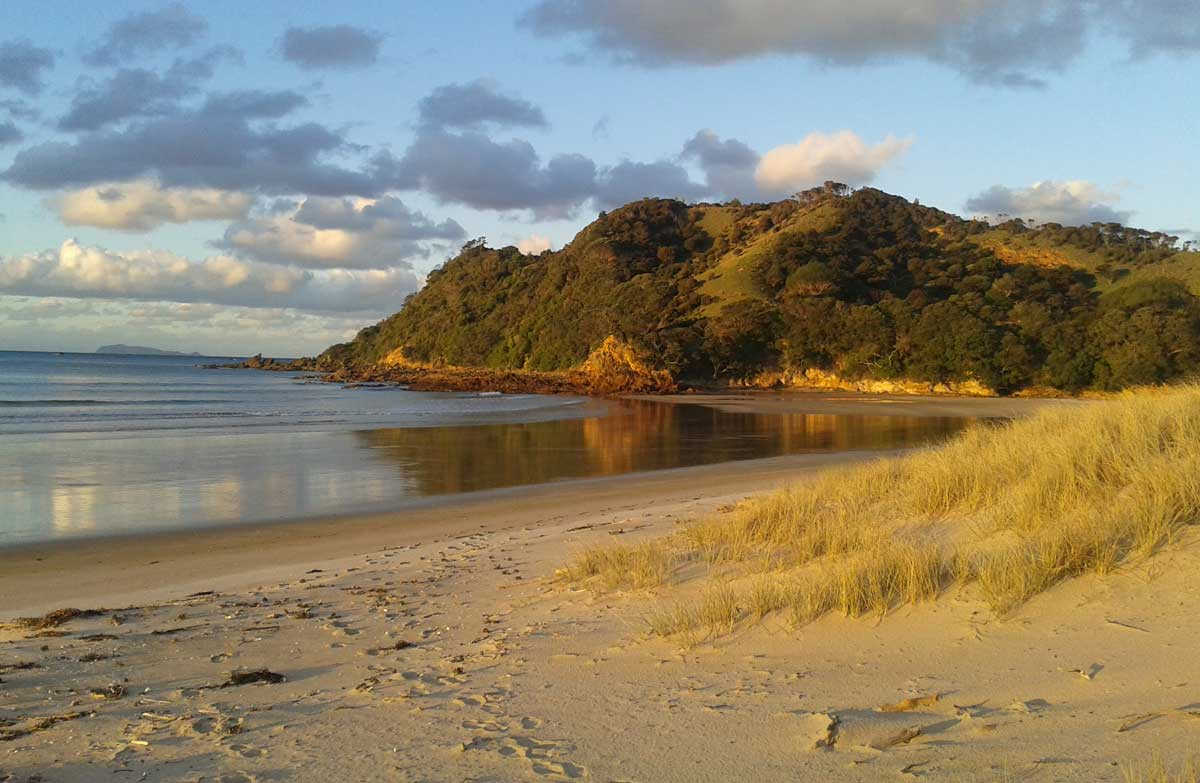 The tunnel was constructed in 1911 by three employees of the Works Department to allow the pastoral lease, Nukuhakare Station access to the beach to move stock along the beach as land access was difficult (hills, ravines). The men’s equipment to excavate the tunnel were picks and shovels. Look carefully at the dripping walls for marks of picks and wonder at the sheer effort involved. Government records for the workers Jim Scott, Charlie Christofferson and Bert Perrett are scarce. Due to the difficulty of the work they were housed in temporary accommodation (built by the employees nearby). The tunnel is 80 metres in length. 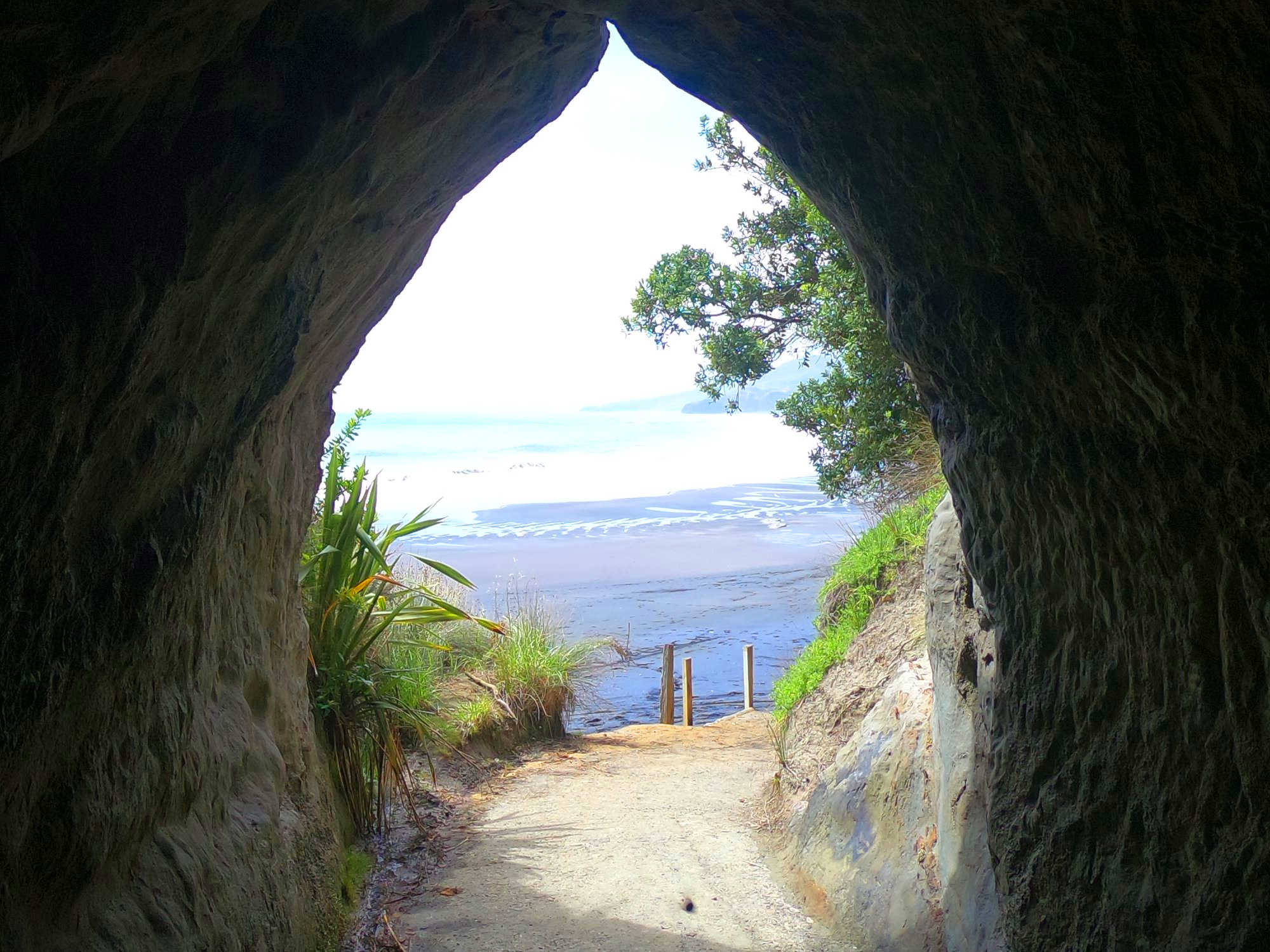 The tunnel was constructed with picks and shovels by Jim Richard Scott, Charlie Christofferson and Bert Perrett. They were all employees of the Government Works Department. It was excavated wide enough for the widest horned beast and tall enough for the tallest horseman.

At the roadside tunnel entrance are dunes and streams to explore while waiting for low tide.

Waikawau beach hand cut tunnel provides public access to the coastline between Marokopa and Awakino. Waikawau Beach is signposted on the unsealed Waikawau Beach Road. The road has a number of hair pin bends (very tight corners). Be careful of wild goats grazing or even stock animals. There is parking and a compostable toilet by the tunnel entrance.

The beach is also accessible from Awakino (33km, approx 1 hr).

Remember to check out Waikato Regional Guide for more ideas what to do and see, lace up the hiking boots and enjoy the Waikato.

Check the Waitomo King Country What’s so great about:

What do you think about “Waitomo Caves, beyond the tourist circuit, what to see and best things to do”?