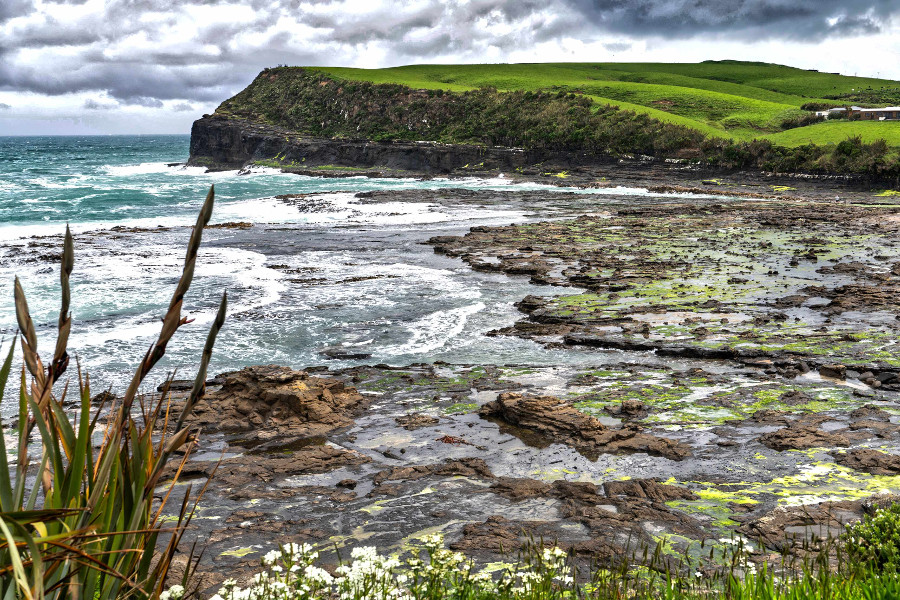 Fossilised wood spotting is dependent on the tide! And you have to look v closely indeed for the fossilised wood. In the southern Catlins lies Curio Bay. This bay is famous for its fossilised forest dating back to the Jurassic Era. At low tide you can peer intently at the wet rock like surroundings to identify fossilised wood.  Initially you might think you are looking at rocks, but on a detailed inspection you can see the grains of the fossilised wood.  This is another low tide excursion to find and identify a spectacular fossilized forest. The petrified Forest is 60 million years old dating back when New Zealand was still part of the massive continent Gondwana.

Park in the Curio Bay car park and a short walk will get you to both Curio Bay and Porpoise Bay. Porpoise Bay often has Hector’s dolphins frequenting the bay.  Swimming with dolphins is possible with the Department of Conservation highlighting the need for swimmers to keep their distance and let any interaction be initiated by the dolphins. Porpoise Bay is unique in that it is the only place where dolphins come so close to the shore without being enticed by people feeding them. The Porpoise Bay dolphin population is small, consisting of fewer than 20 resident animals. They use the bay to raise their young, feed and rest. For detailed information about Hector’s Bay check Curio Bay/Porpoise Bay: Southland places to visit, Department of Conservation online information.