Collingwood has experienced a short lived gold rush, an era of extractive industry from flax, coal and timber to present day dairy farming and tourism. A rich legacy of buildings, from government post offices, police stations and courthouses await further exploration. Collingwood is attractive with its surrounding hills and nearby Aorere Valley. Aorere Valley leads to the iconic Heaphy Track passing the heritage grocery store Longford. The remains of nineteenth century gold mining make for an interesting day trip from Collingwood. 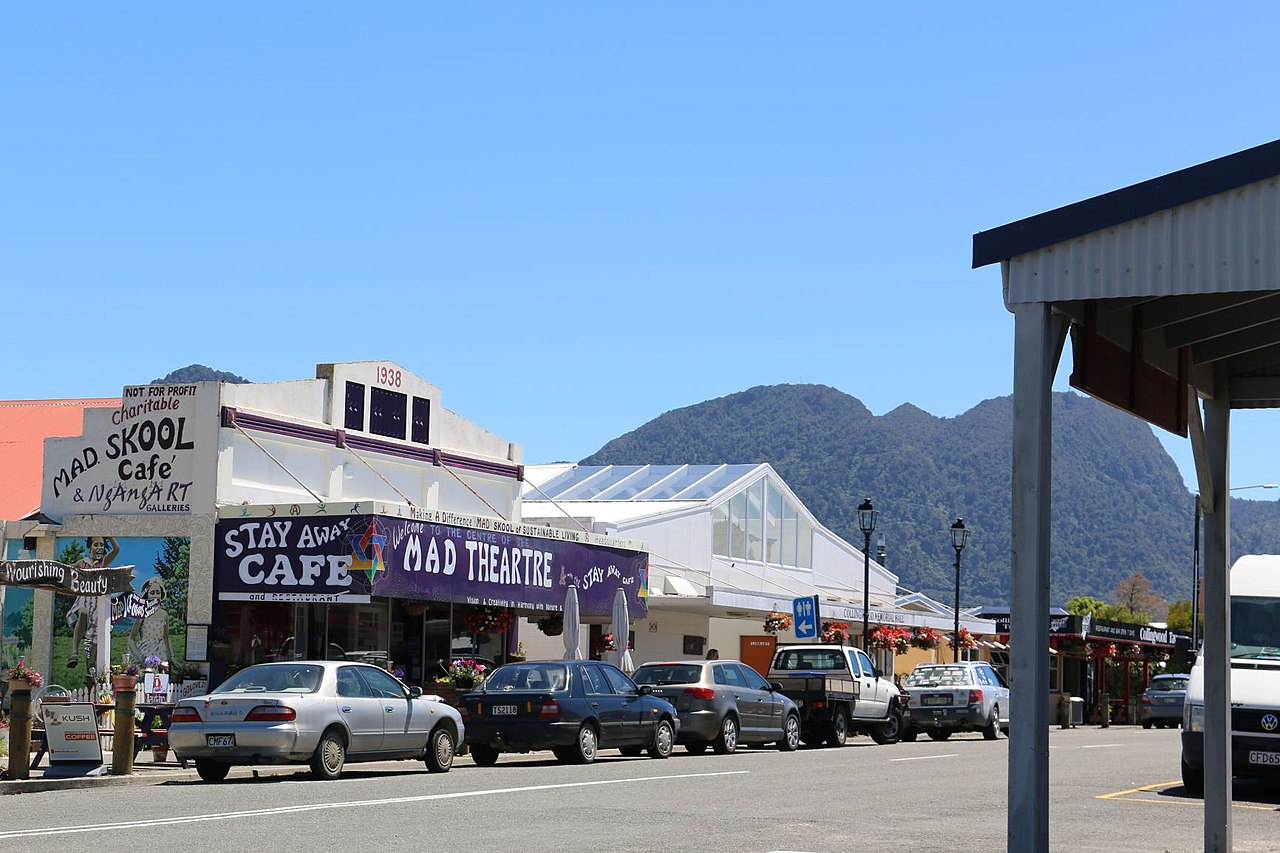 The settlement was later renamed Collingwood after Admiral Cuthbert Collingwood, Lord Nelson’s second-in-command at the Battle of Trafalgar in 1805. Following the discovery of payable gold deposits in the Aorere Valley in 1856 the town’s population surged. The population peaked at an estimated 2500 gold miners. Gold was found in the Aorere in December 1856, and within a year there were a thousand men working there. Aorere became the first major goldfield in New Zealand and was notable because sluicing was used and the diggers got together to set down their own regulations. The rush lasted for three years, during which time Collingwood was mooted as the capital of New Zealand. Collingwood is Golden Bay’s oldest and second-largest town. While the original town plans were surveyed on terraces on the eastern side of the Aorere River mouth, Collingwood ended up in its present location on the flat land below the Aorere River. The town’s wooden buildings were damaged or destroyed in major fires in 1883, 1897, 1904, 1930 and 1967. 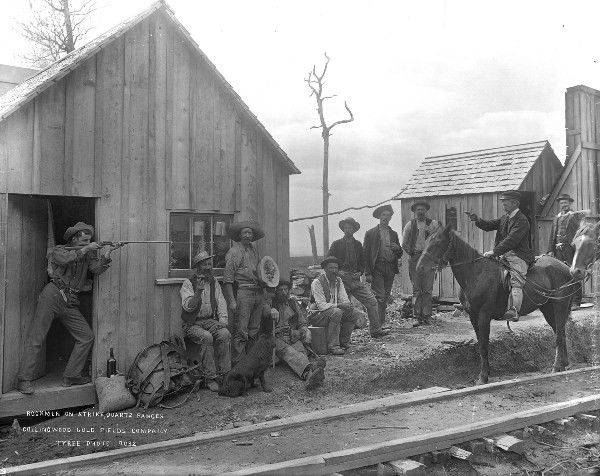 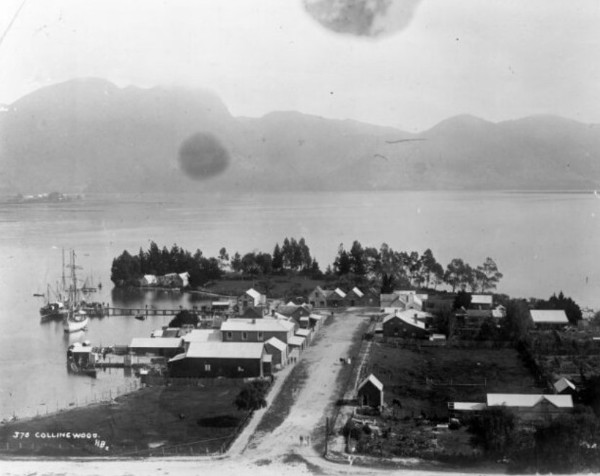 A cemetery where headstones narrate stories of shipwrecks, floods, epidemics and early childhood deaths are a frequent story.

The ornate wrought iron fences invite photographers inside to amble through the atmospheric grounds. The hillside was once part of the coach road to the goldfields. 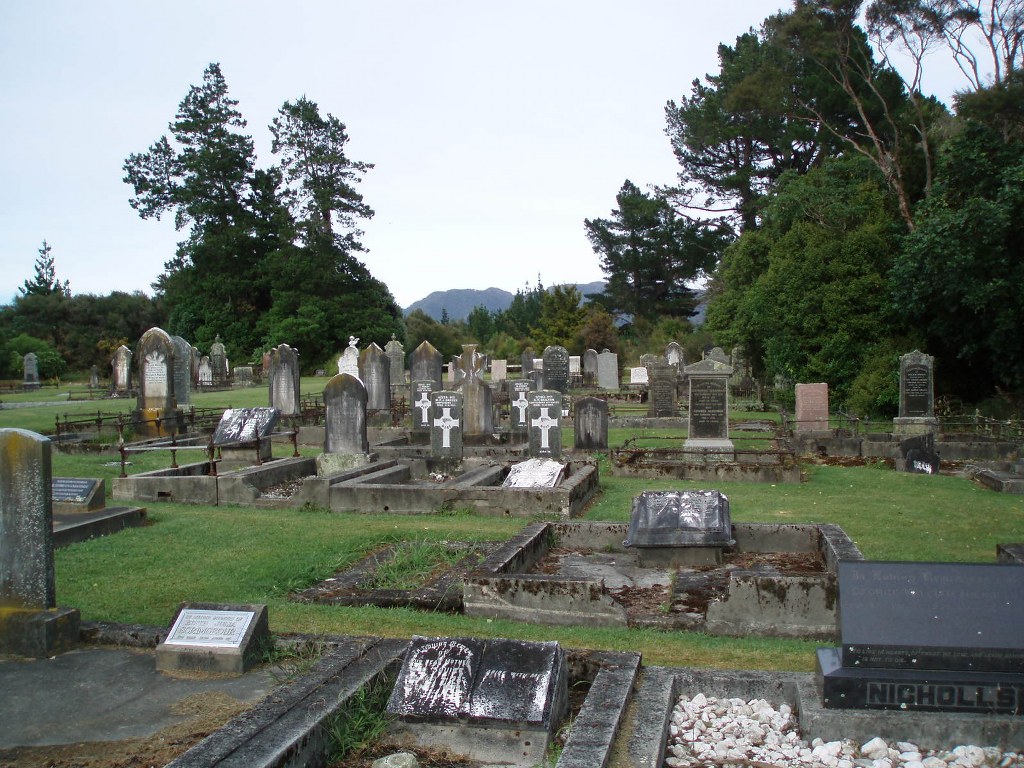 Tamati Pirimona Marino was a chief at Aorere when the New Zealand Company first visited. He signed the Treaty of Waitangi and is buried at the Old Collingwood Cemetery. Fred Tyree was a pioneer photographer who recorded the early days of European settlement. His exceptional black and white images are on display at Aorere Centre, Collingwood. 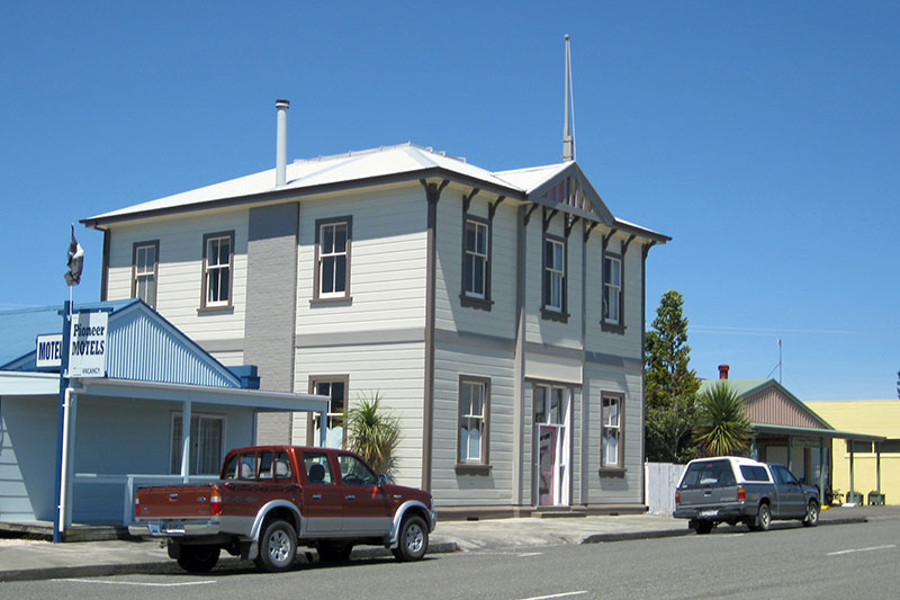 A stunning example of early government functional buildings, the 1904 Post Office was one of the first to be established under the Local Posts Act 1856. Post Offices were a key part of government administration with the management of communication routes. The 1904 Collingwood fire which devastated over twenty buildings resulted in this fine 1904 building of locally sourced stone. The Collingwood Post Office was built to a design created by John Campbell [1857-1942], the Public Works Department’s ‘Draughtsman in Charge of Public Buildings’. The Collingwood Post Office is a simple example of Imperial Baroque, a style favoured by the Department, and is typical of post offices Campbell designed for New Zealand’s smaller towns and suburban areas.

Collingwood Courthouse was built in 1901 to replace the original 1882 courthouse, which was required because of the gold miner’s lawlessness. By 1857 a lock-up, constable’s rooms, and a magistrate’s house had been constructed to control the district’s miscreants. In 1900, the new courthouse, designed by well known architect John Campbell (1857-1942) was completed. The new building reflected the more homely style of English Domestic Revivalism. The building is distinctive for its inclusion of various architectural styles from a Tudor influence in the gables to Queen Anne features above the exterior window frames. 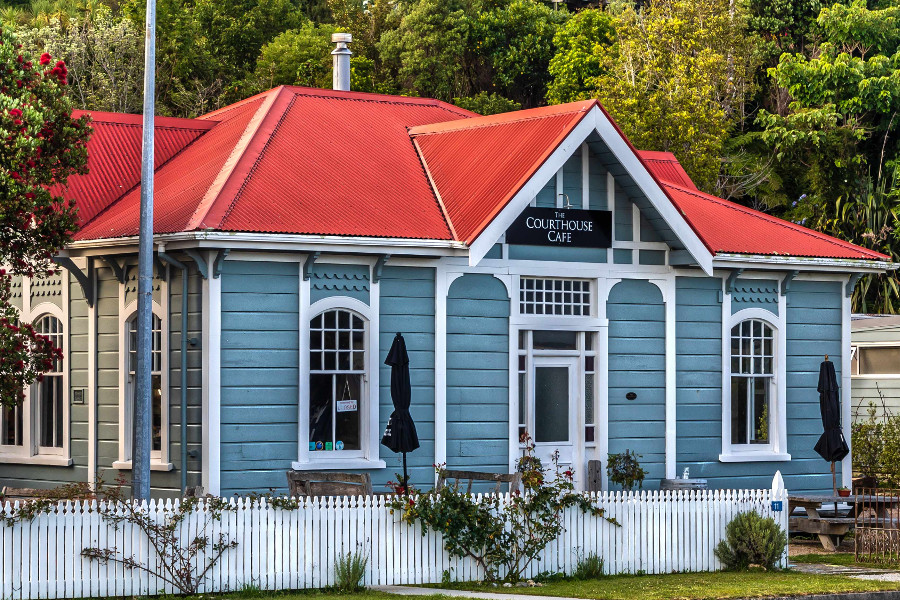 It is recorded formality in the courthouse was often lacking. Officials would often arrive by steamer, the Lady Barkly from Nelson, its captain was a regular pop-in sight at the back of the court where he would get the attention of the magistrate to indicate his ship was leaving. Tides waited for no man, and that included court officials.

Collingwood Courthouse forms an important link to Collingwood growth as a significant settlement. 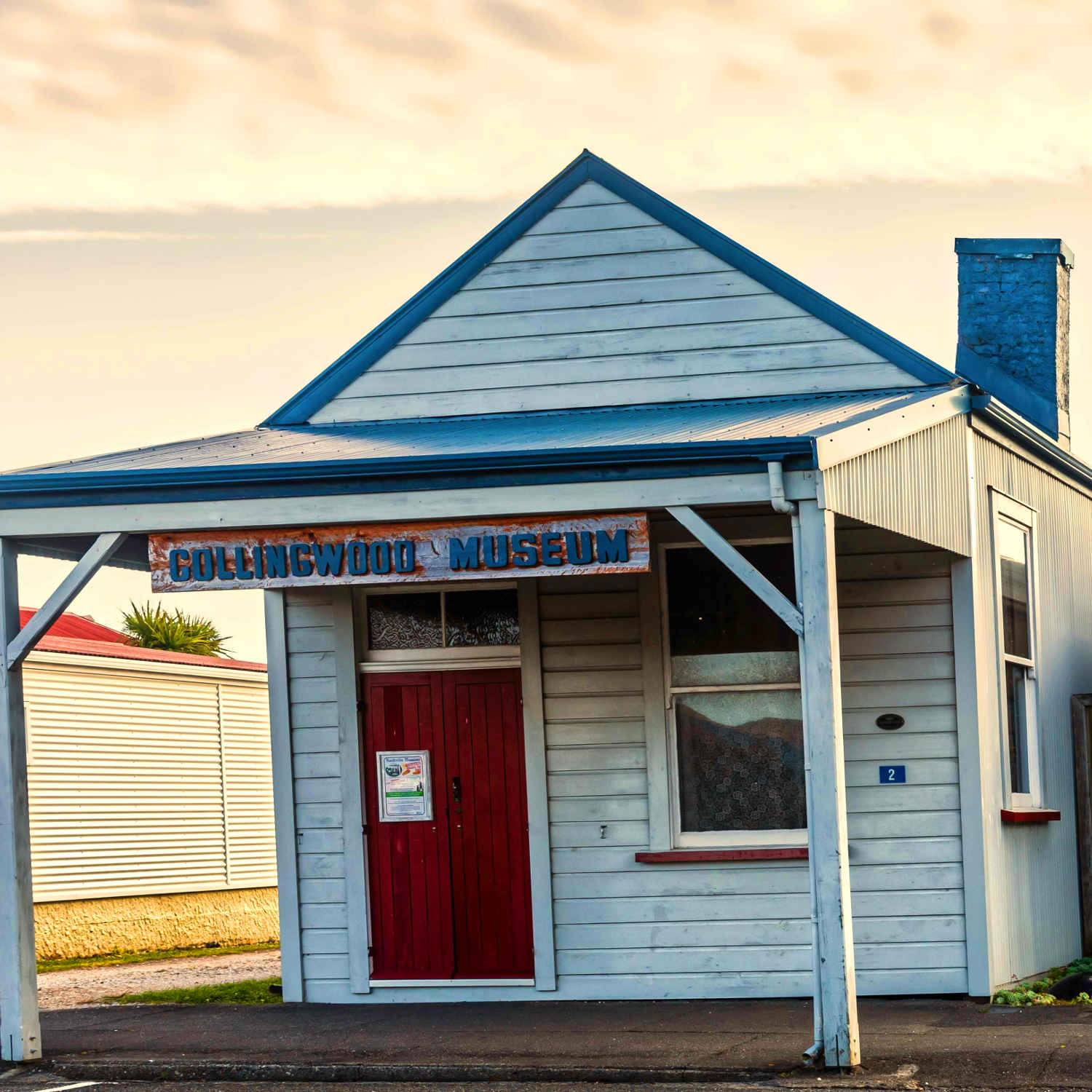 Formerly the home of the Collingwood County Council (1910)is the perfect place for a repository of photographs, documents and artefacts relating to the history of the area. The collections are set in a classic museum style and, for visitors familiar with interactive exhibits they could be disappointed. For researchers and genealogists the museum is a gold mine of local data. Records and files are packed to the rafters. An appointment beforehand would be necessary for researchers

As described by Heritage New Zealand, St Cuthbert’s Church is a fine example of the small wooden Gothic Revival churches built throughout New Zealand in the second half of last century. Well maintained and largely original, it is the oldest building in Collingwood. TOWNSCAPE/LANDMARK VALUE: Although sited on a rise above Collingwood, St Cuthbert’s visual prominence is masked by surrounding trees. 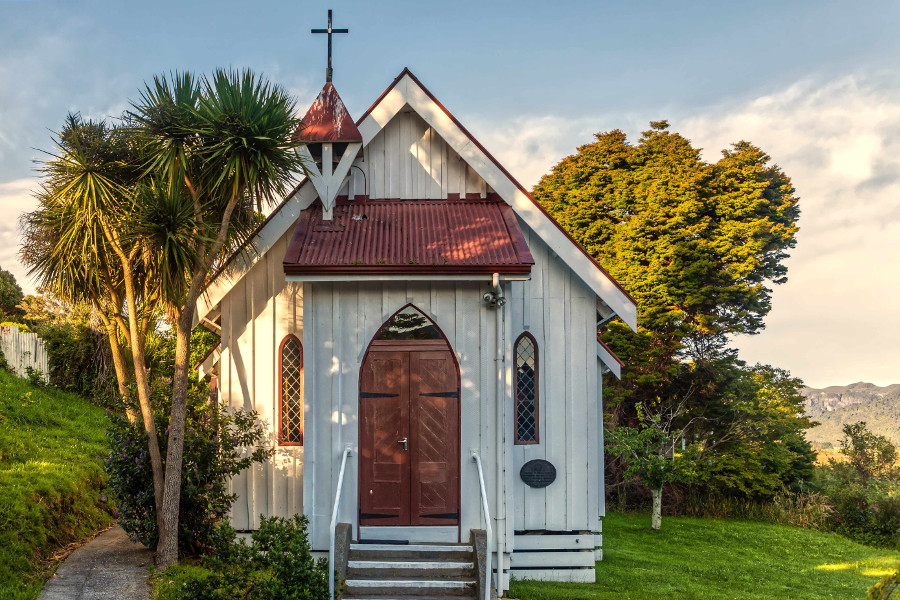 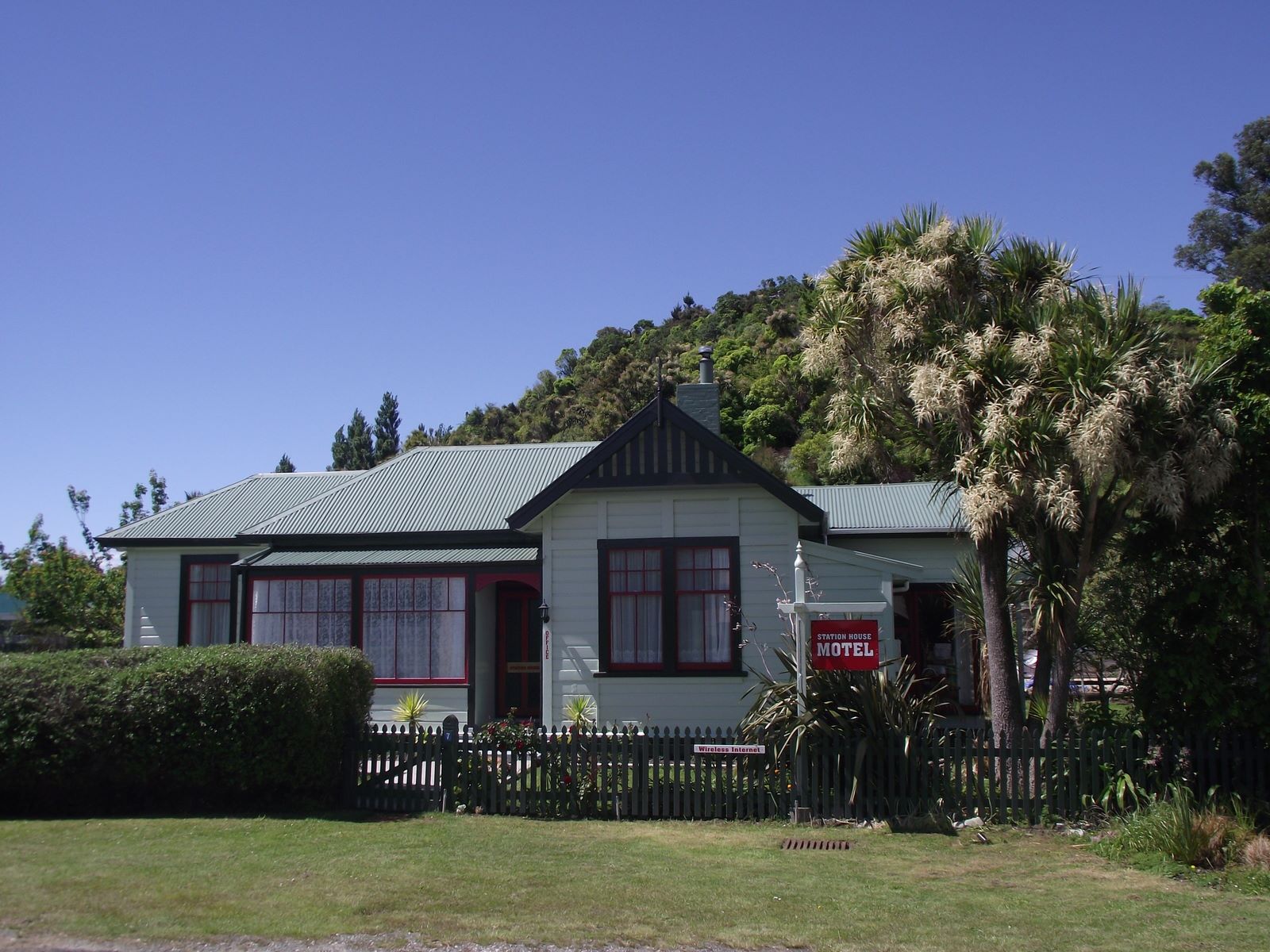 Contemporary, perhaps contentious or challenging art has a place in Nelson.

Arts Council Nelson runs the Refinery Artspace on Halifax Street, where they hold events and exhibitions to provide the community with an accessible and stimulating art space.

Now a local reserve, the former cemetery’s oldest marked headstone is Agnes Gibson who died 14 February 1866. It is estimated that upwards of 150 people are buried there but many of the graves are unmarked. Some of these unmarked graves are for local Maori, some for the Europeans. Wateno, Rawiri, Mitchell, Raharon and Elliot are just a few of the local families whose ancestors were the earliest arrivals at the cemetery. There is a memorial (1992) recognising the unmarked graves in the cemetery.

The reserve has picnic tables, toilets and dog walking tracks. The rare Katipo spider and a threatened species of carabid beetle have been documented in the area. There are also important wader bird roosting and breeding habitats in the area including a habitat for the banded rail.

The no exit road up the Aorere River terminates at the start of the 78.4km Heaphy Track. The valley flats are mainly dairy farms with one of the country’s original old-fashioned country shops.

The name of the district, Bainham’s name is constructed from two early European settlers, Bain and Graham. 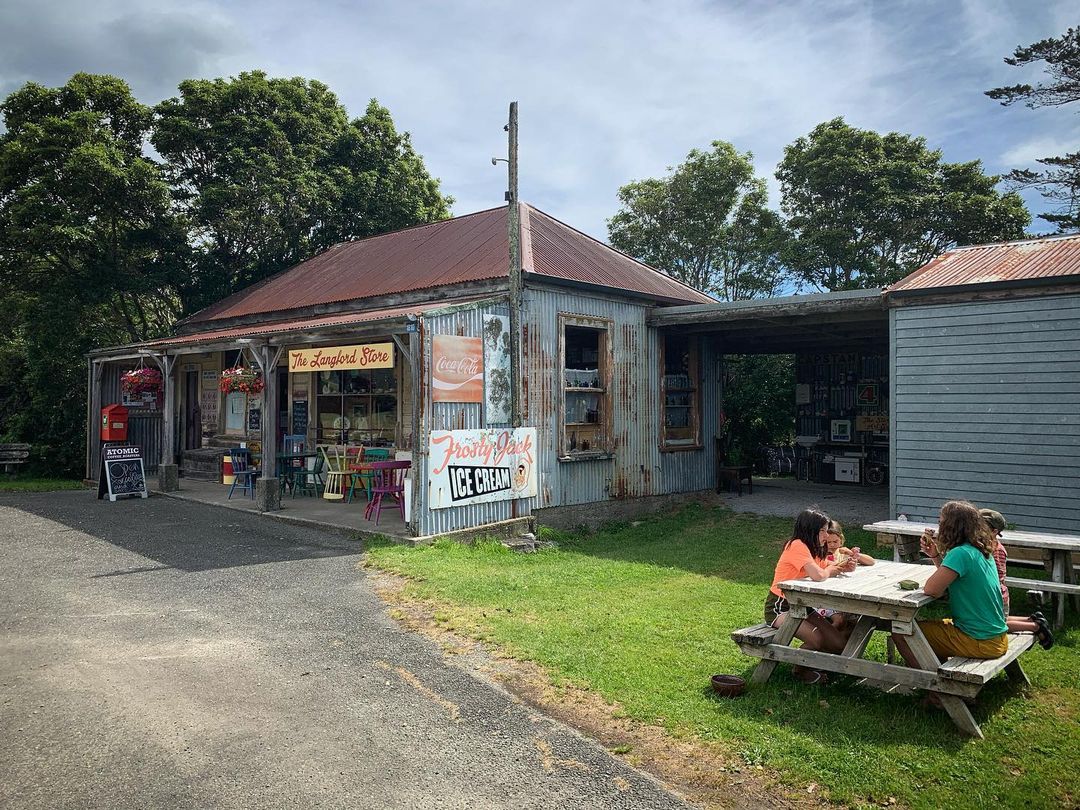 The Langford Store has a display of Kiwi memorabilia, and vintage china for sale. The Langford Store is the perfect excuse for a coffee, homemade treats and to write a postcard to get stamped and mailed in the historic post office.

The store is a treasure trove of practical Heaphy track items from freeze dried food to the quirky collectibles that benchmark curious places. The store has been owned by the same family since it opened in 1928 and has become a local landmark. Look for the kiwiana memorabilia and send us a photo of your finds!

Managed by volunteers the museum is a cavernous space, a former cheese factory packed with ancient tractors, cars, sometimes unidentified farm equipment. Rusting parts are nestled in the undergrowth outside adding to the charm of the place. At the back of the premises is a dilapidated jail or lockup once located at Collingwood’s Station House. If your timing is right the museum hosts “steam up” days, where visitors can eat scones baked on the coal range. 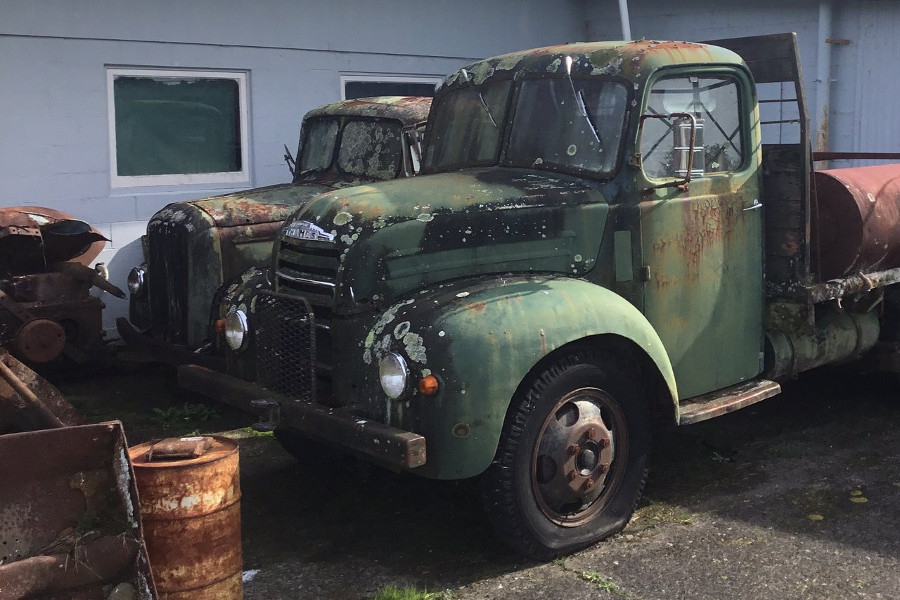 As the name suggests, Golden Bay was once a gold rush town, and the Aorere Goldfields Track will take you back in time to the old gold-mining days. 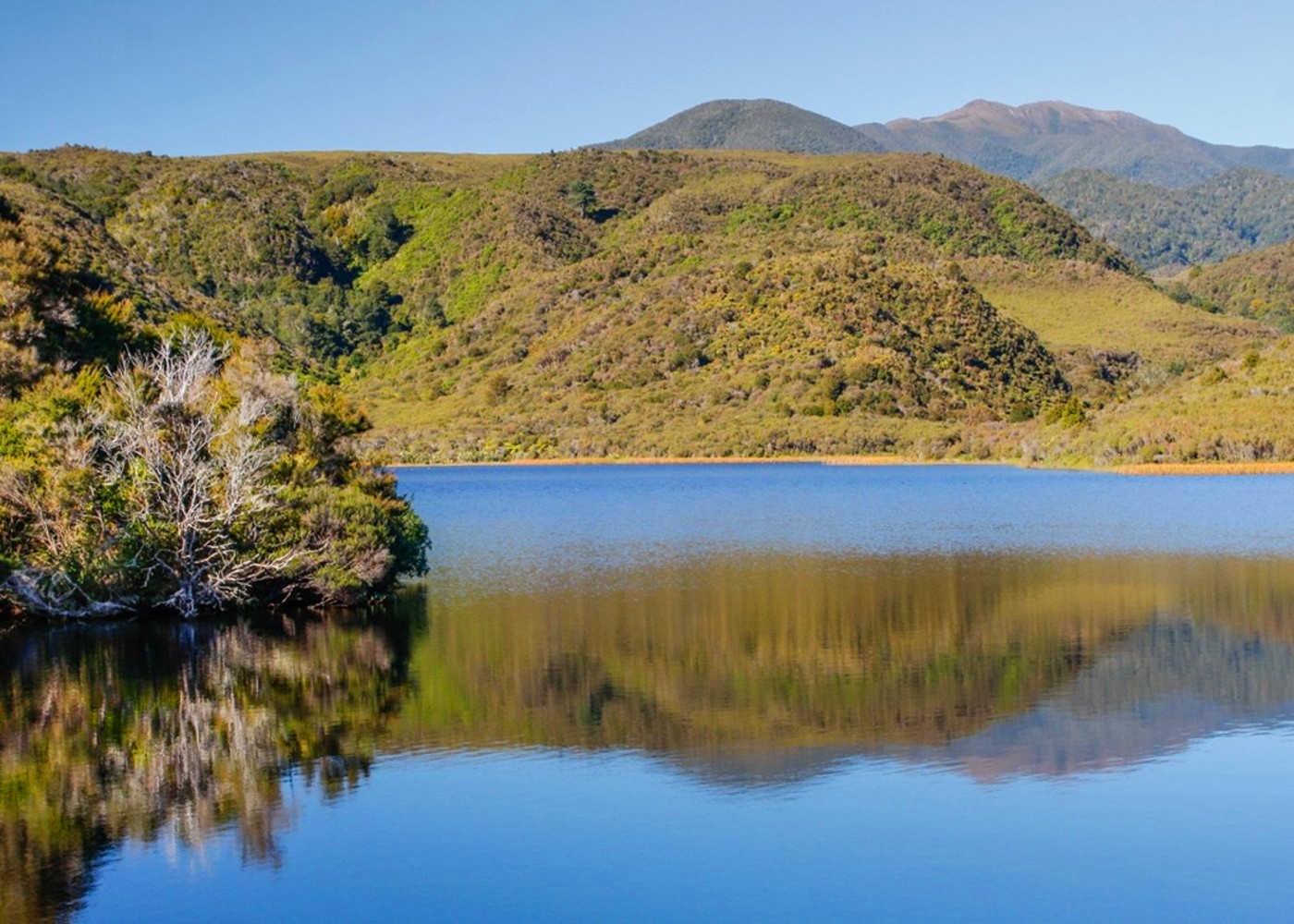 The three-hour loop walk in the Aorere Valley explores some of the areas more accessible gold-mining remnants, including the Slate River Sluicing Company Dam (Druggans Dam) and the Aorere Caves where miners left their signatures marking their presence. The Ballroom cave is accessible via a signposted side track and it purported to be a dance venue.

A picturesque photo moment for enthusiasts as there are remnants above the water line at low tide evoking a sense of past activity. Onekaka Ironworks (1920’s) mined the region’s iron ore resources converting into pig-iron and iron pipes, then exported to overseas markets via the local wharf constructed for that purpose. The Great Depression  91930’s) sent the economy severely downward leading to the closure of the Ironworks operation. The ruins of the old wharf and tramline can be found in Onekaka and is the last remaining evidence of the company’s existence. 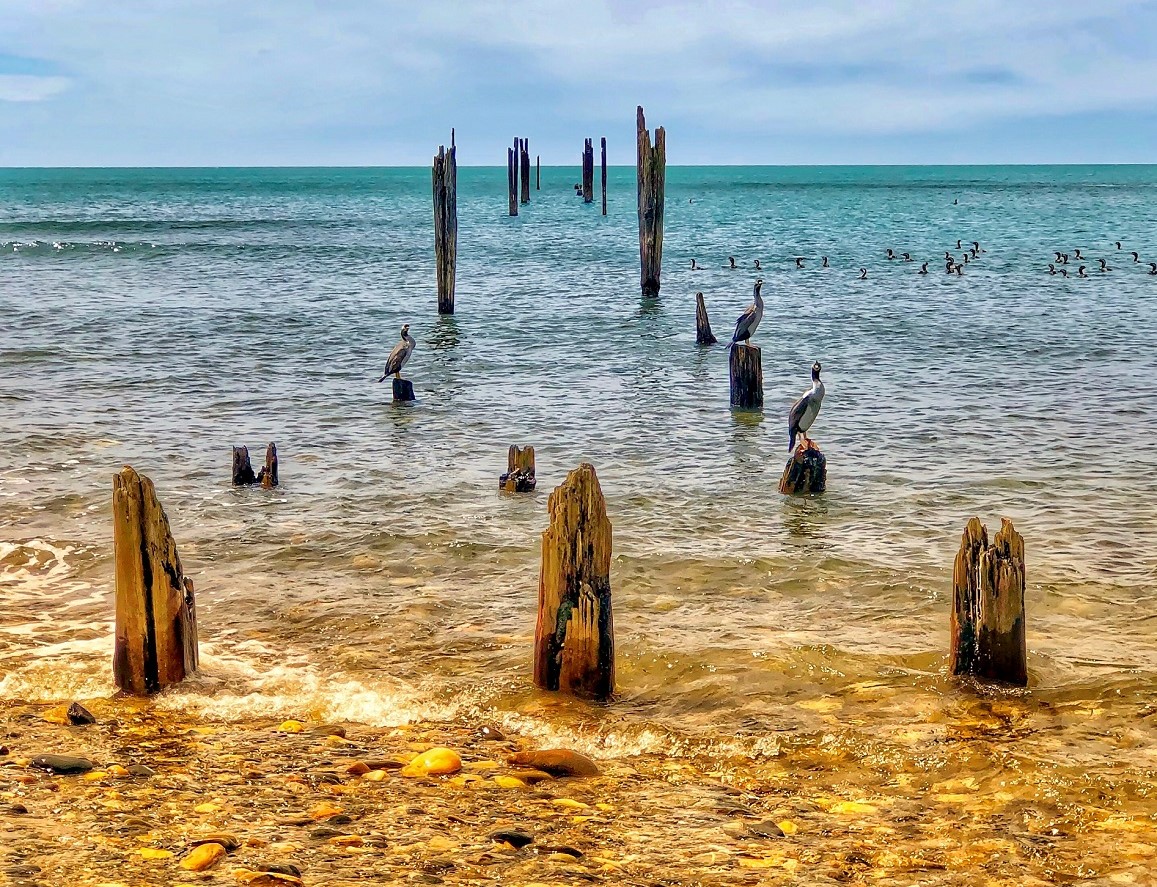 Onekaka is a small settlement between Takaka and Collingwood in Golden Bay. The Wharf can be found at the end of Washbourn Road near The Mussel Inn.

It is estimated Maori occupation dates back to the thirteen century. The area was known as Mohua. Golden Bay refers to the discovery of gold in the nineteenth century. Place names are a strong indicator of legends reaching back to Hawaikian Polynesian roots of the ancestral Maori. The Onetahua Marae in Pohara (established 1986) is used by the whole community for tangi, hui and wananga (educational base). It is the home marae for three local iwi: Ngati Rarua, Ngati Tama, and Te Atiawa, but it operates as a multicultural marae with the wider involvement of the whole community. The protocol (kawa) there is Taranaki.

“Onetahua” is the Maori name for Farewell Spit and translated means “heaped up sand”. 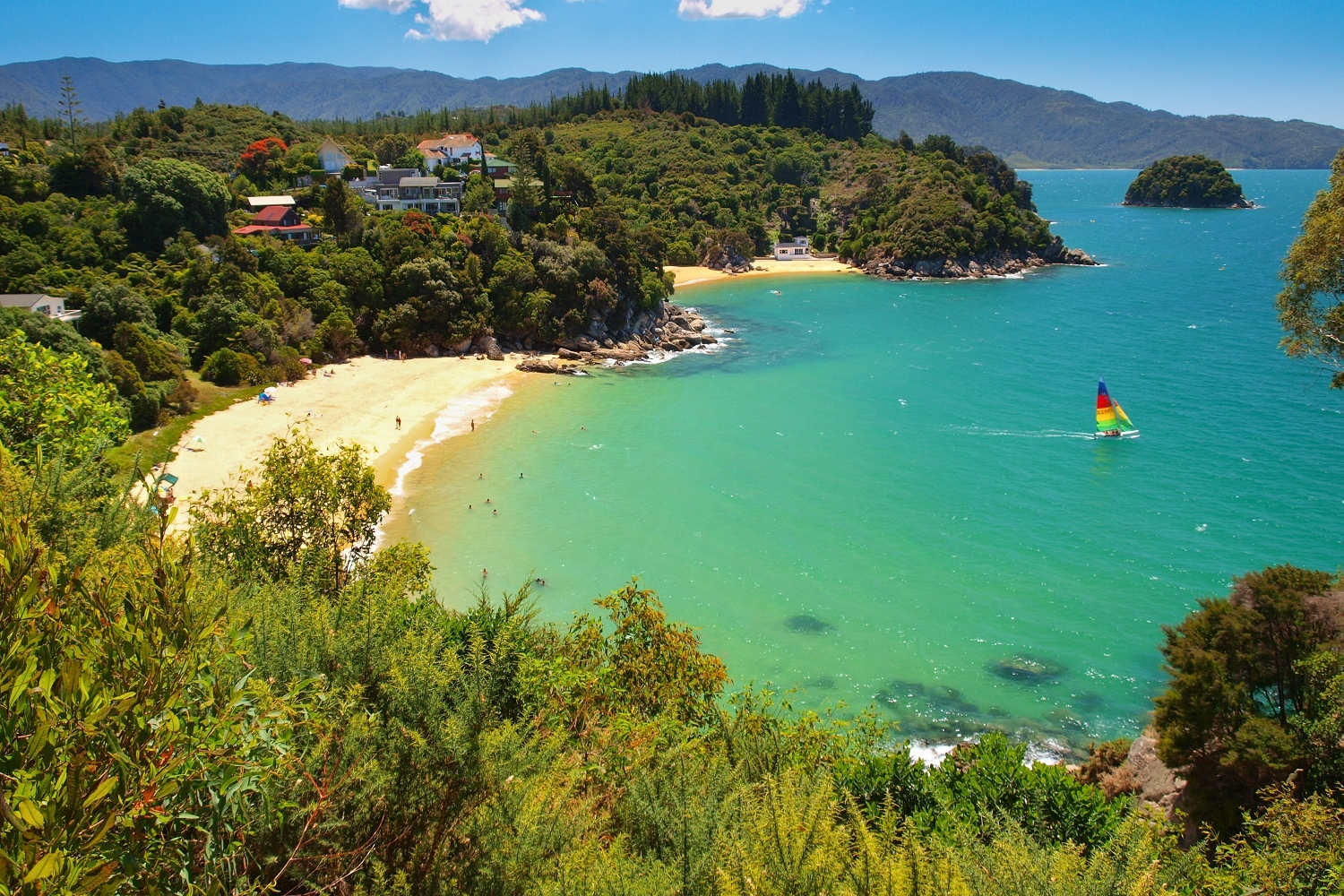 10 great ideas for a day in Motueka 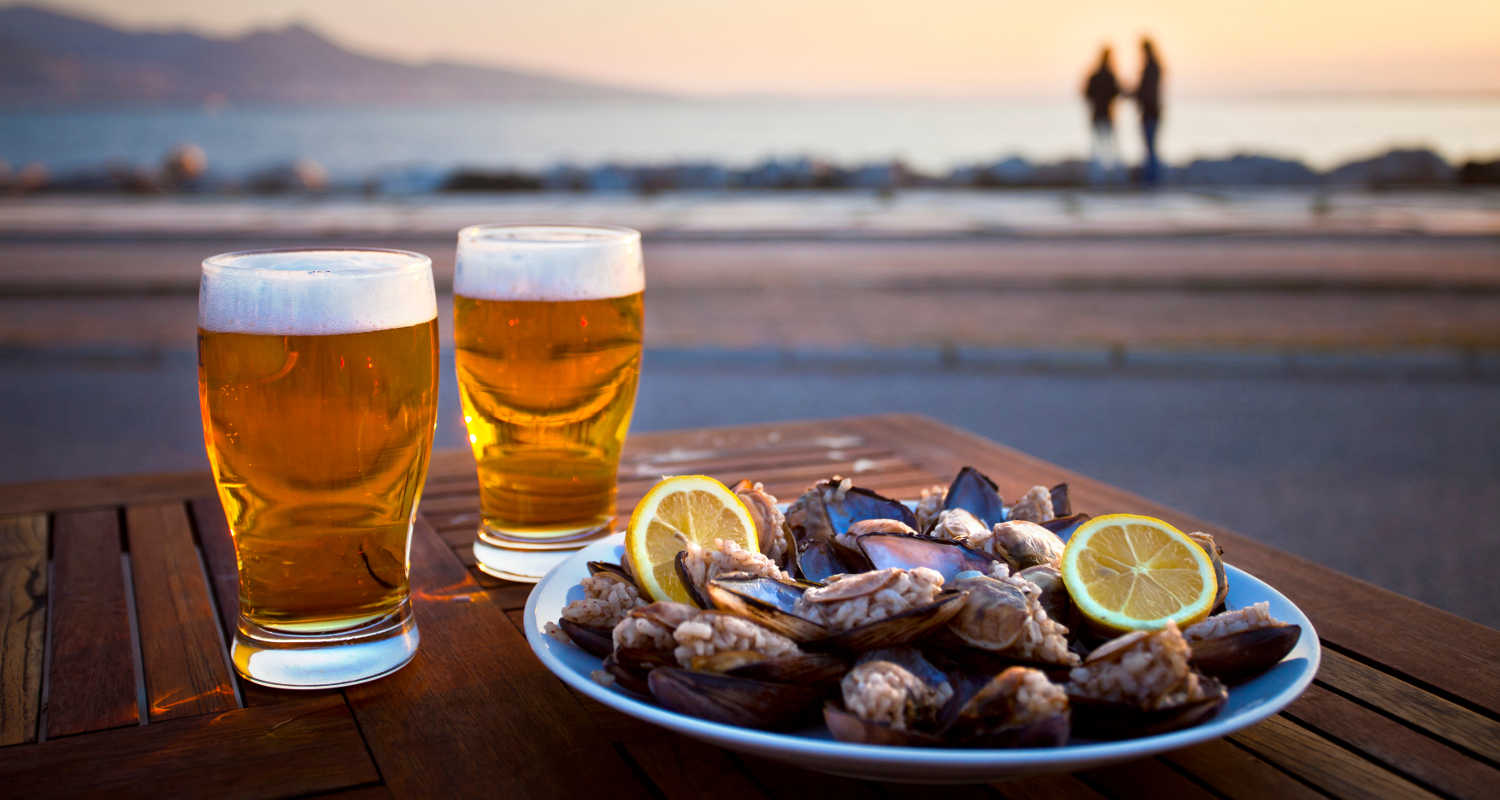 What do you think about “Historic Golden Bay, Collingwood and surrounding district”?