4 special places to visit in the Aongatete Forest, guide

Volunteers the backbone of conservation, the passionate individual who gives time freely. This article is unashamedly promoting the work of the Aongatete Forest Trust. About Us… We are a volunteer group that manages 500 hectares of native forest in the Kaimai Mamaku Conservation Park, between Tauranga and Katikati. The Project is a joint venture between Forest and Bird and the Aongatete Forest Restoration Trust. Our Trust was established in 2006 by Tauranga Forest and Bird and the Katikati Rotary Club and is supported by local volunteers, Forest and Bird members, landowners and Ngai Tamawhariua who have the kaitiaki (guardianship) role over this forest. 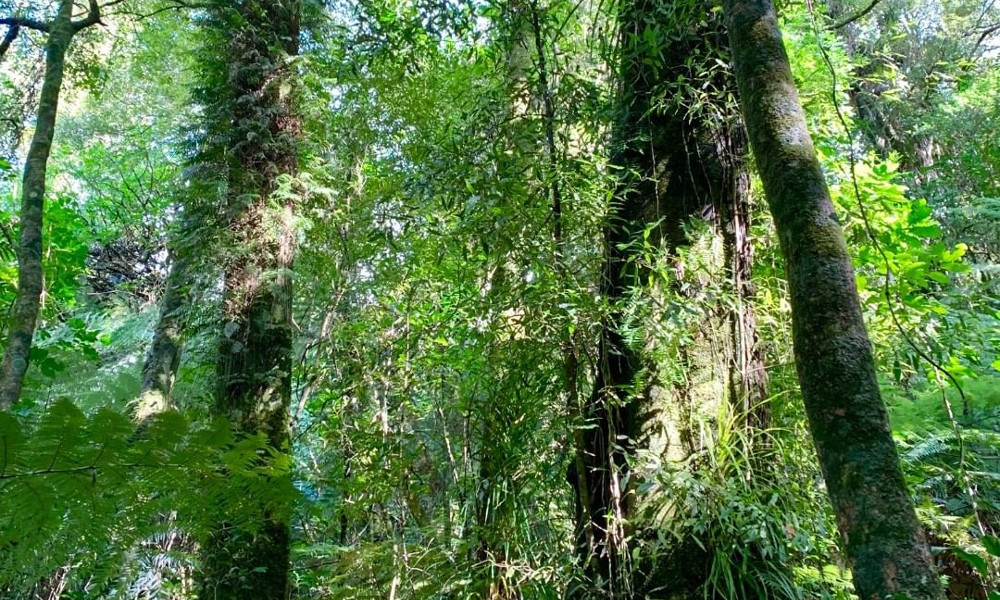 Aongatete has a range of amazing walking tracks through regenerating native forest, not to mention that summer favourite, the Aongatete River swimming holes. There is something for everyone with our short Nature Walk through to the 3.5 hour Long Loop Track.

The DOC Kaimai to Coast brochure features all the tracks and many others in the surrounding area. The information below is an online public resource, the links are displayed below to get your walking shoes out and take a trip to the Aongatete Forest. Please support the work of volunteers.

Walks at Aongatete take you through pūriri and kohekohe forest and along the Aongatete Stream. All Aongatete walks start at the car park. There is a map here that details the walks. 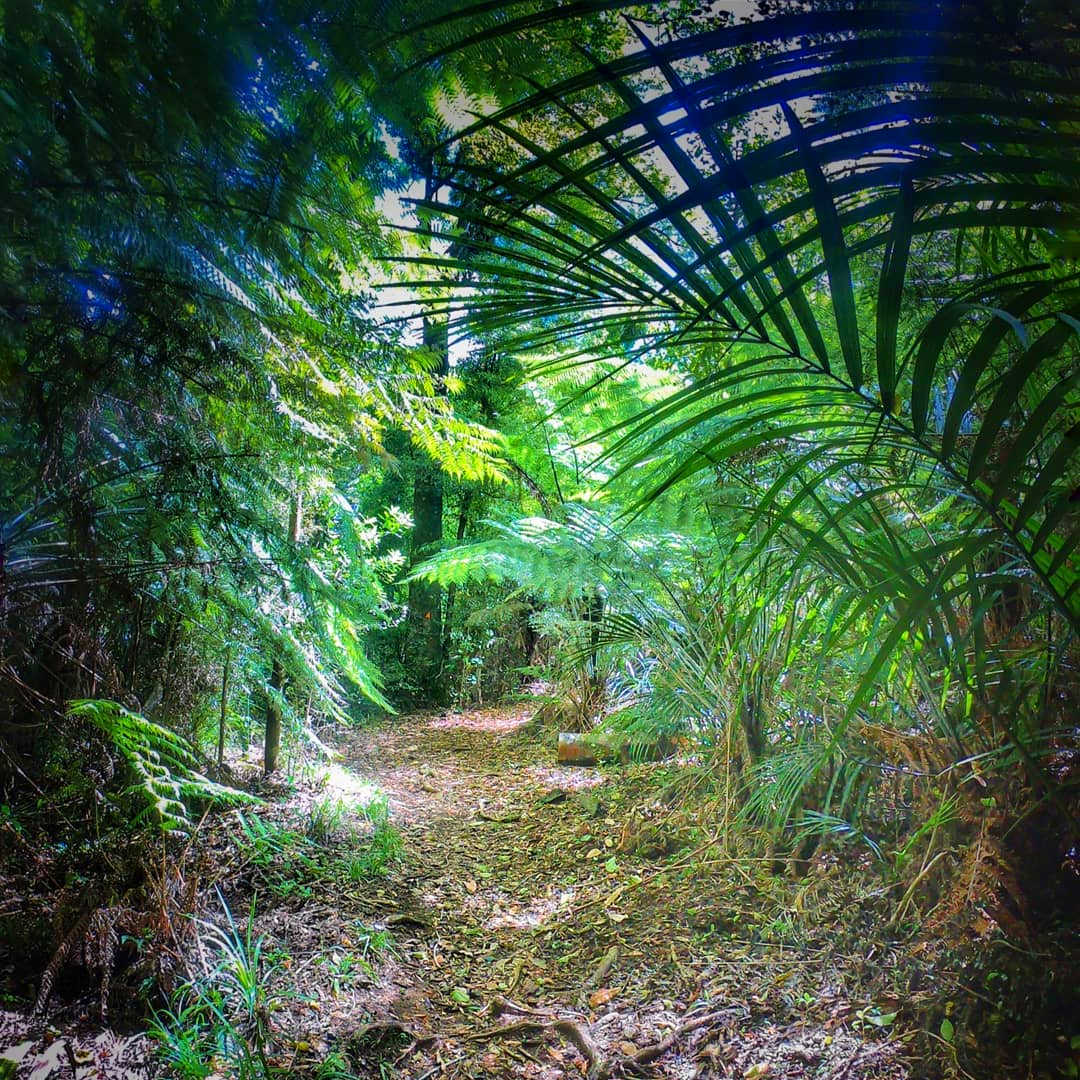 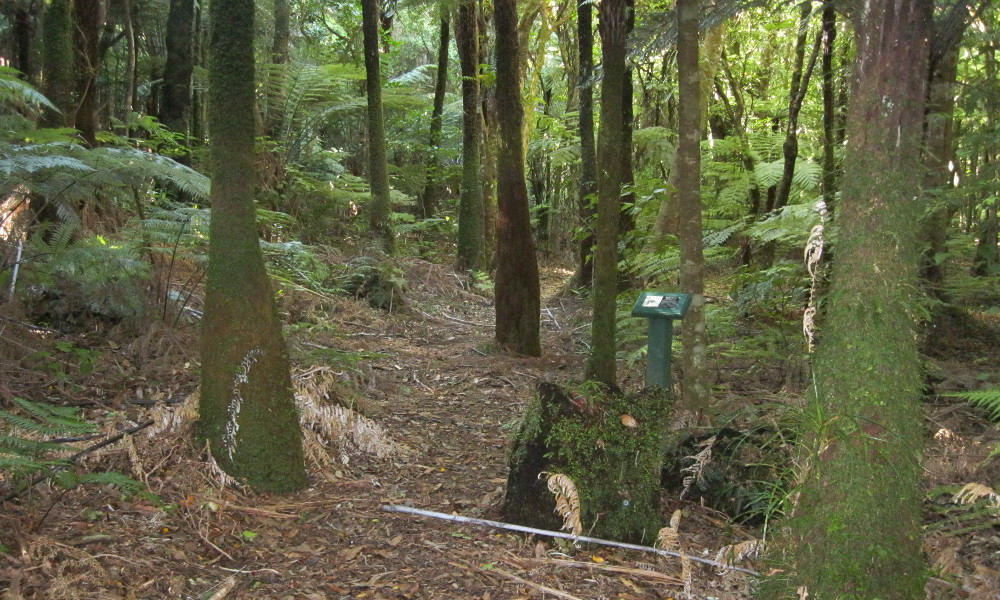 This short loop takes you through a lowland forest area.

Take the well-marked Loop Track path until you reach a junction. The Long Loop continues straight ahead. Turn left for a gentler, well-graded walk through bush, emerging near the car park after about an hour. Cross the stile and walk down the paddock to the car park.

This is a more difficult track including short, moderately steep sections and stream crossings.

Follow the Loop Tracks path to the junction with the Short Loop and continue straight ahead. Follow the path through the bush, crossing a small stream and following beside another one, before the path rounds a corner and begins to head back to the road. Continue through bush until another junction with the Short Loop Track is reached. Take the path to the right, which emerges from the forest at the top of a paddock. Cross the stile and walk down to the car park. 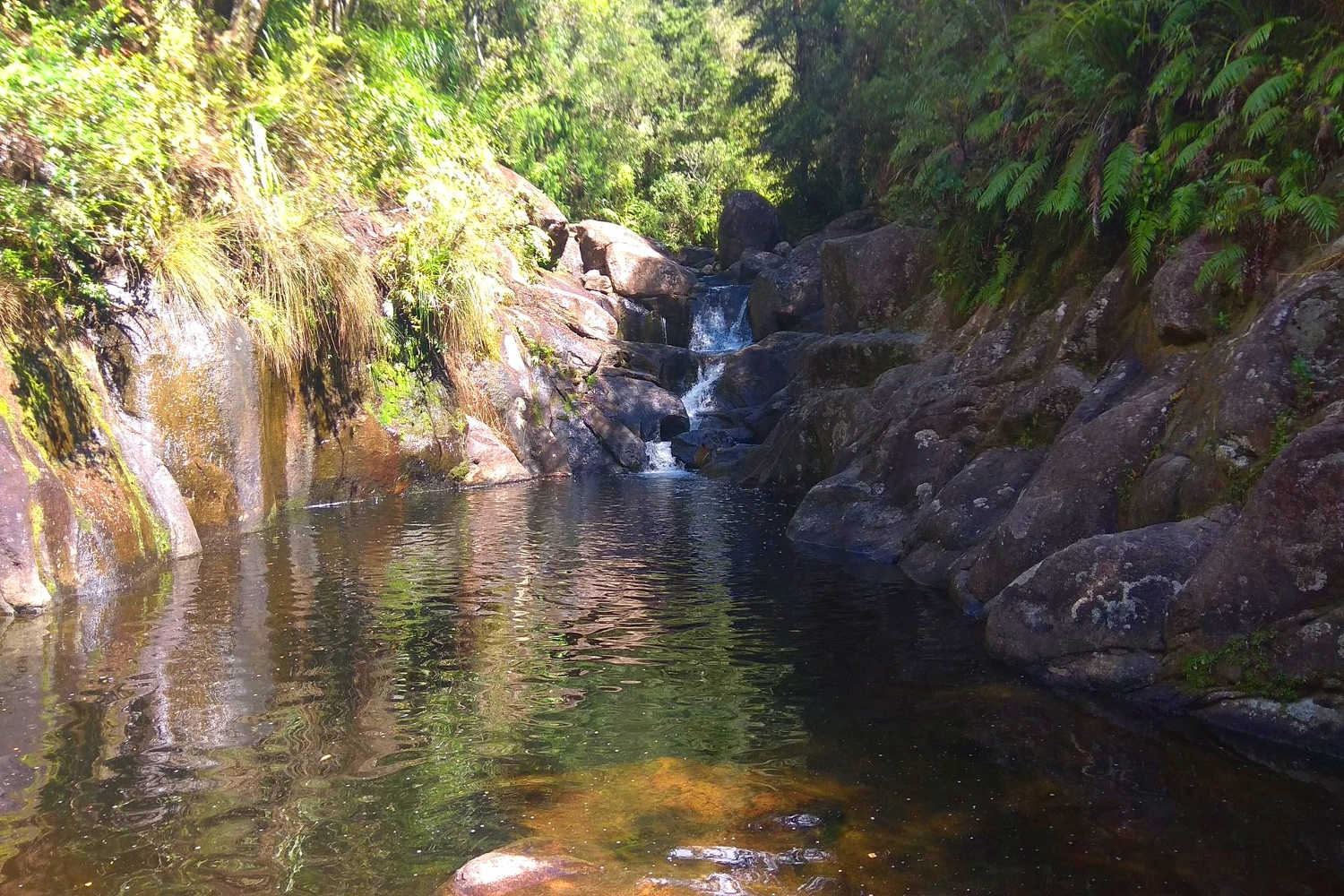 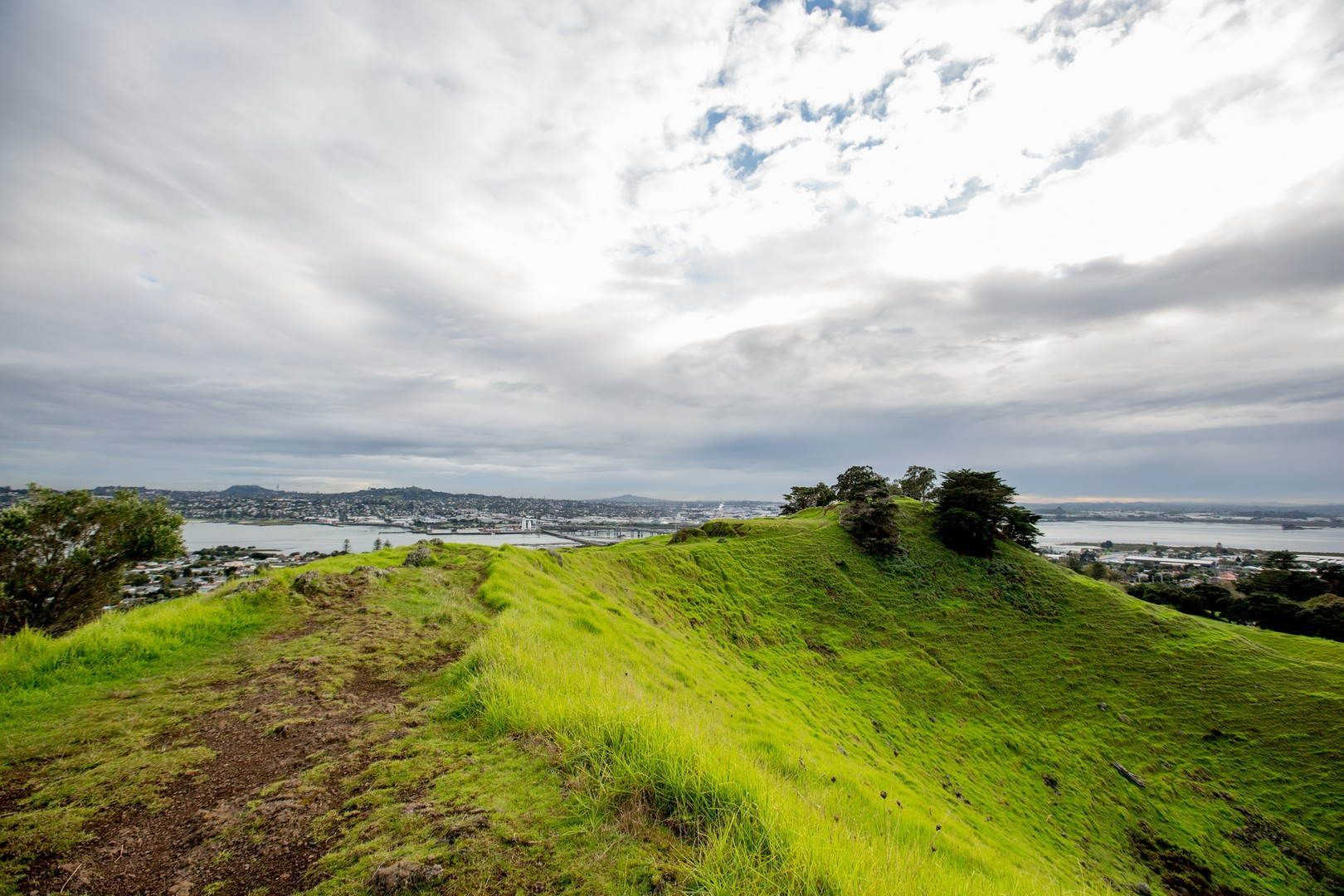 The Aongatete River may be accessed from this track, which starts on the western side of the lodge and might be slippery in damp conditions. A left branch off this track, about 15 minutes down, leads to some attractive swimming holes and is worth exploring.

FLORA AND FAUNA FOUND IN THE FOREST

Long-tailed bat – the presence of long-tailed bats was recently confirmed at Aongatete by ultrasonic bat detectors. Although the more common of our bat species, it’s still classified as Threatened – Nationally Critical.

Tomtit – this small but striking black and white bird is sometimes seen in the forest.

Whitehead – recently discovered at Aongatete, their presence was a welcome surprise. Classified as At Risk – Declining.

Kaka – Regular visitors to Aongatete, attempts (unsuccessful so far) have been made to entice them to stay and breed. Classified as At Risk – Recovering.

North Island Robin – a common sight at Aongatete, this cheeky bird with a loud and distinctive call is often seen flitting about close to forest tracks, attracted by the presence of visitors. Classified as At Risk – Declining. 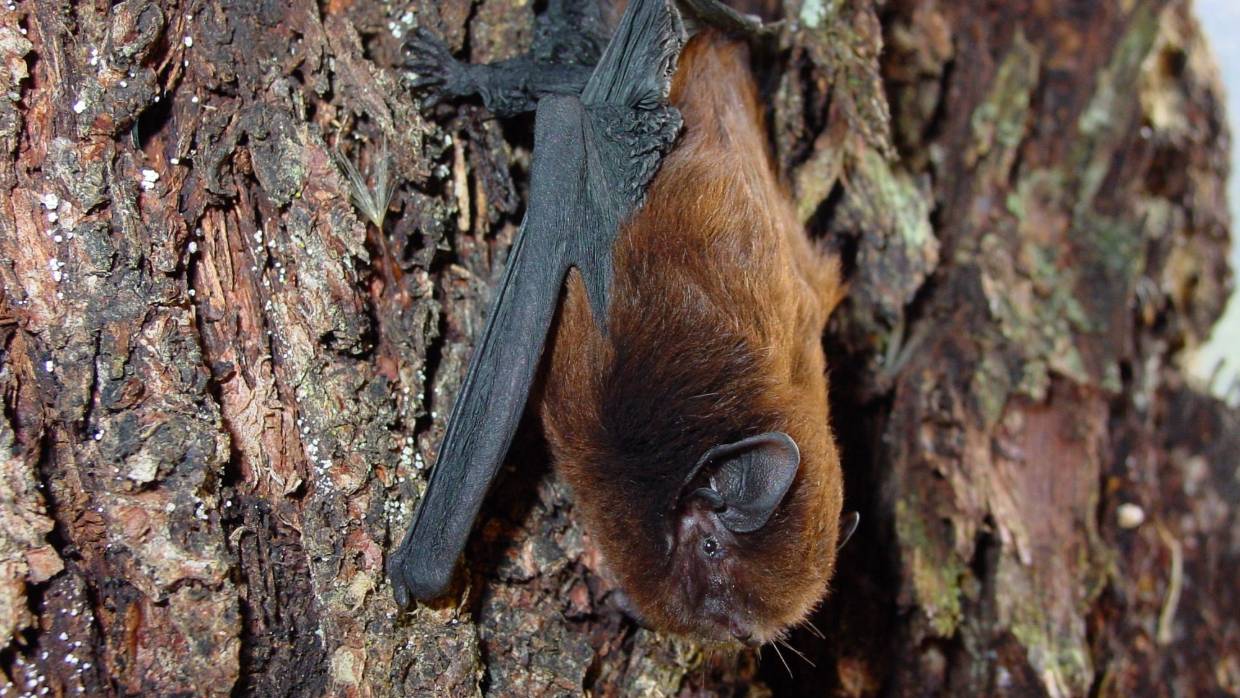 Rifleman – thought to have disappeared from the northern Kaimai entirely, but a remnant population must have survived as they were sighted again in 2013 and have become increasingly common at Aongatete ever since. They make a high-pitched noise which usually only younger ears can hear! Classified as At Risk – Declining.

Helms butterfly / forest ringlet butterfly – this beautiful native butterfly is rarely seen, but the number of characteristic nibblings on patches of its larvae’s food source, gahnia, suggest Aongatete may be a stronghold for the species. Classified as At Risk – Relict

Peripatus – occasionally seen on our hosted Night Walks, this intriguing animal, looking like a worm with legs, is a “living fossil” having hardly changed in 500 million years.

Forest gecko – a beautifully patterned but scarce and rarely seen lizard, the forest gecko is classified as At Risk – Declining.
King fern – Aongatete is home to a remnant population of this beautiful, large fern. Susceptible to deer browse, the plants have now been fenced in and some specimens translocated to a more accessible display area that has also been fenced. Classified as At Risk -Declining.

Toropapa – Delightfully scented, this shrub is very common in the forest.

Raukawa – Another plant very susceptible to browsing, particularly from deer. It only survives at Aongatete in small numbers where it has established epiphytically on tree ferns out of the reach of deer.

Ileostylus micranthus – Green mistletoe is very rare at Aongatete and has only been observed growing on totara.

Fan fern (Schizaea dichotoma) – Small patches of this rare and unusual looking fern can be found in the forest. Classified as At Risk – Naturally Uncommon.

Mida salicifolia – This plant is easily mistaken for a white maire, but is a small hemiparasitic tree that derives some of its nutrients from the roots of other trees. Classified as At Risk – Declining.

Kawaka – There are a handful of beautiful specimens of this large native cedar at Aongatete. Previously classified as At Risk – Naturally Uncommon, it’s now Not Threatened but nevertheless remains sparse in its overall distribution.

Brachyglottis kirkii – Aongatete is home to both varieties of this shrub. B. kirkii var. angustior is abundant in places, whilst the much rarer epiphytic variety, B kirkii var. kirikii (classified as Threatened – Nationally Vulnerable) is only occasionally observed. They both have large, beautiful daisy-like flowers.

Northern rata – This tree is to be found at various stages in its lifecycle, from a small epiphyte tentatively growing its roots down the trunk of a host tree to large mature emergent trees. It is also to be found establishing terrestrially in places.

Poroporo (Solanum aviculare) – Not to be confused with its close relative, the common Solanum laciniatum, this shrub is now classified as Threatened – Nationally Vulnerable. It is present at Aongatete in very low numbers.

Ramarama – This small tree with its attractive bullate leaves often grows unobserved in the forest. Owing to the threat from myrtle rust, to which it appears particularly susceptible, this species is now classified as Threatened – Nationally Critical.

Lindsaea – All three species of Lindsaea ferns may be found at Aongatete. L. viridis, which grows on river banks is classified as Threatened – Naturally Uncommon.

Dactylanthus taylorii – A fully parasitic plant that grows underground on the roots of certain trees, but which flowers above ground in summer. The plant causes a deformation in the host root that used to be collected and preserved as “wood roses”. Seeds have been sown at Aongatete, but will take many years to establish. Classified as Threatened – Nationally Vulnerable.

Tupeia Antarctica – Seeds of white mistletoe were recently sown at Aongatete. It will take some years to know if the establishment was successful. Classified as At Risk – Declining.

For more information how you can contribute contact  Aongatete Forest Trust. About Us

At the end of Wright Road in Aongatete. The forest is only a 30 minute drive from Tauranga, 20 minutes from Katikati or 2.5 hours from Auckland. A public carpark is situated below the Project’s kohanga (the base of operations for our work in the forest). Access to the forest tracks, which are under the control of the Department of Conservation, start from the carpark.

Top 10 things to do around Thames

Best 10 short walks in the Coromandel

What do you think about “4 special places to visit in the Aongatete Forest”?