Ghost cottages, relics and abandoned machinery echoes of the gold rush days of the 1800’s make Cromwell a magical place to explore the gold mining fever heritage of Otago. The reborn heritage precinct is the place to start. Cafes, gift shops and 19th century shop fronts encourage visitors to explore further afield. Bannockburn and Bendigo are scoured landscapes where the weapon was a massive water cannon. And for prospective gold miners, gold fever frenzy often led to multiple day treks through unforgiving territory. The chance of striking it rich, the dangers of river floods and searing summers with biting cold winters made for many a tragic end to the lure of wealth. Walks, ethnographic museums, heritage sites and the landscape tell the story of the nineteenth century gold rush. Innovations in mining created an industry supporting the growth of New Zealand extrusive industries, gold prospectors became settlers and built towns. 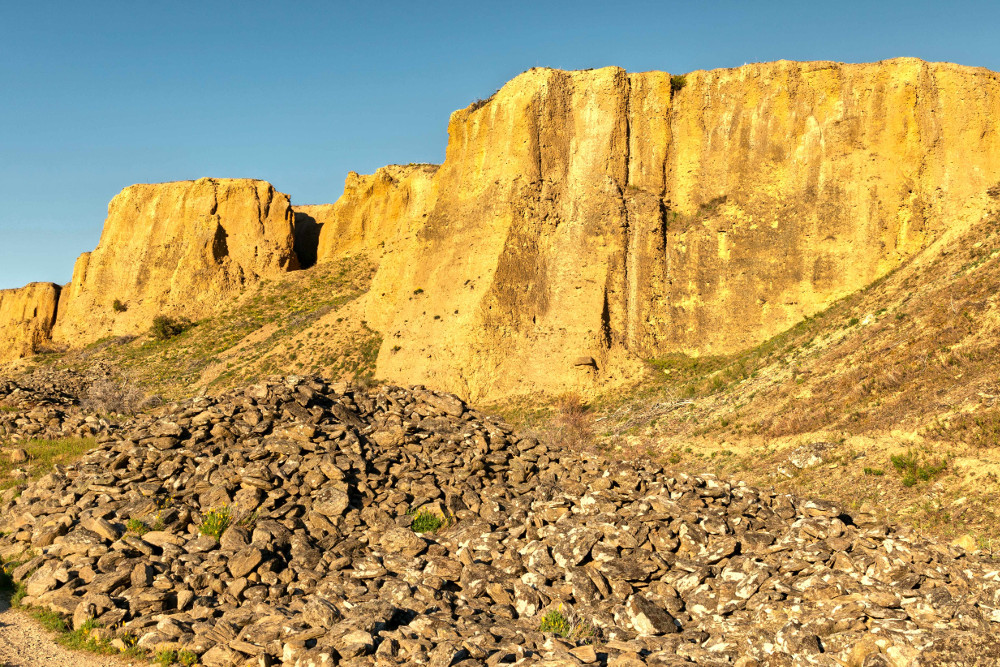 A landscape denuded of vegetation is stark evidence of the huge changes to the landscape when the pressure of water cannons created an environment dominated by rock rubbles, striped bare hills and various shades of ochre, dust and yellowed tracks. Bannockburn is elevated giving visitors a chance for a great landscape shot of the vineyards, the waterways and the central Otago plateau region.

A superb reason to linger over a meal is the Wine Country Restaurant & Bar is just across the bridge from Cromwell. The views are stunning. The Bannockburn Hotel, built in the 1930’s holds the original liquor licence granted in Central Otago. The surrounding land was mined extensively in the 1860s, with the Bannockburn settlement stretching out along what is now the Bannockburn-Nevis road as miners followed gold up the creeks. 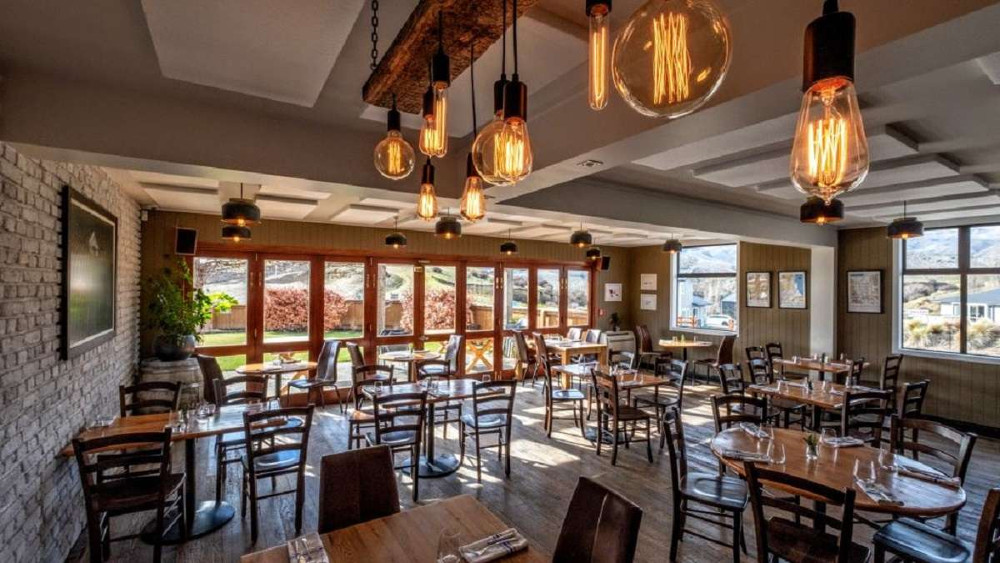 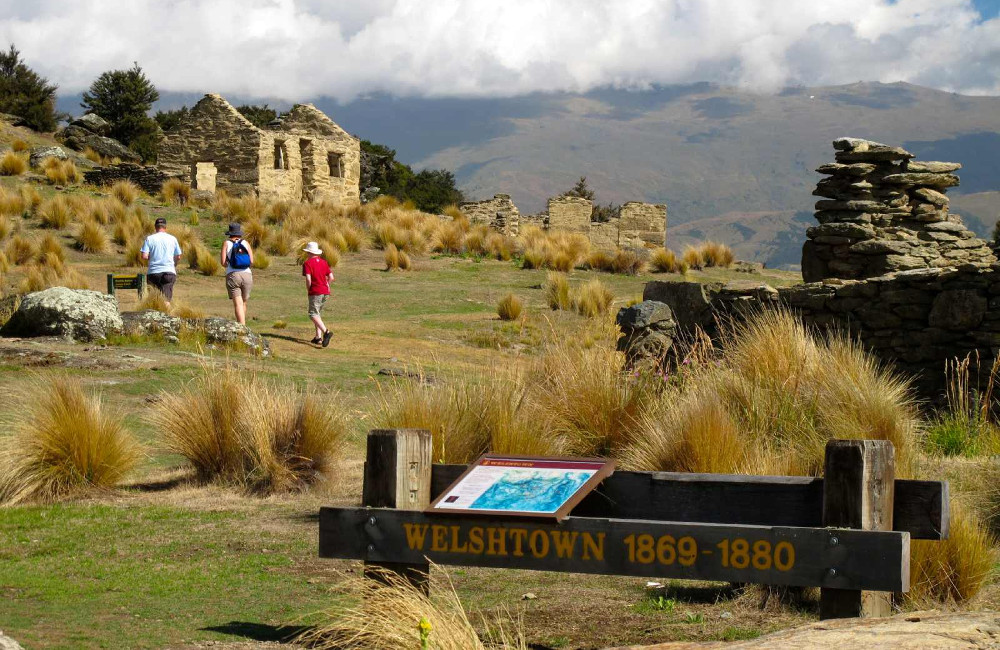 Bendigo Historic Reserve is characterized by abandoned stone cottages. Mute testimony to the harsh conditions miners endured in the fevered pursuit of gold. The basic dwellings would have been freezing in the sub-zero winter. Bendigo has the ruins of two settlements, Logantown and Welshtown. Short walks are well signposted. Walks pass mine shafts (do not enter shafts), plaques indicate function of buildings from a blacksmith’s shop, the Matilda Battery site, mudlock (spoil) heaps and building foundations.

St. Bathans is worth a detour. Take a day trip to St Bathans from Cromwell. St Bathans should be on your must visit list for devotees of abandoned buildings, continued occupation and the stories of former glory.  St Bathans has got it all with a glorious lake formed from a quarry, aptly named Blue Lake.  Then there is the former post office, the stone remains of the school buildings, the Vulcan pub still trading and the quaint main street with a string of heritage buildings.  The former gold and coal mining town of St Bathans, formerly named Dunstan Creek, lies deep in the heart of the Maniototo region, Otago. 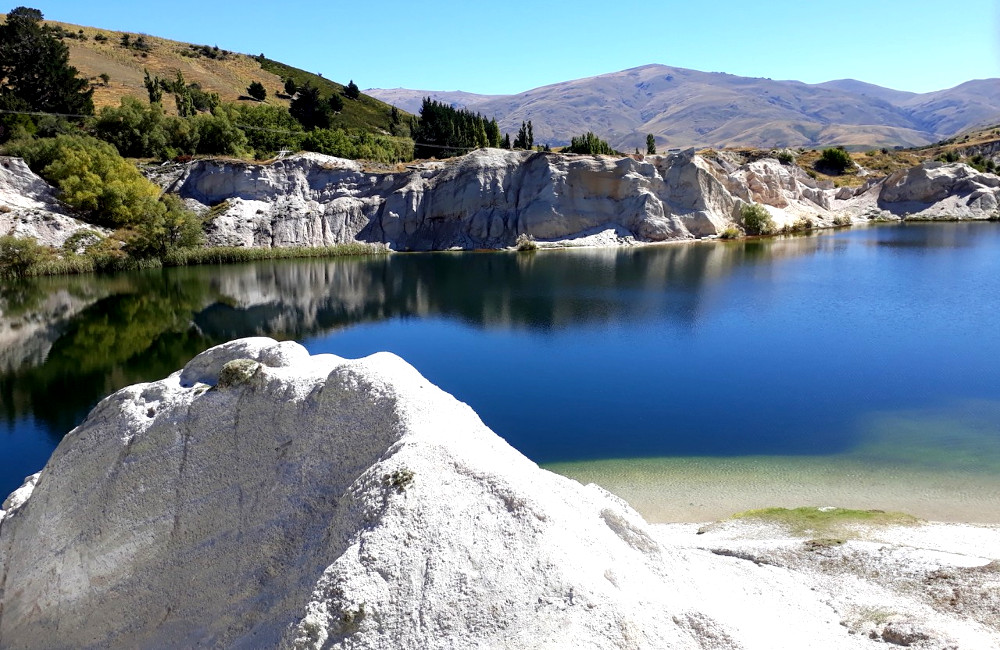 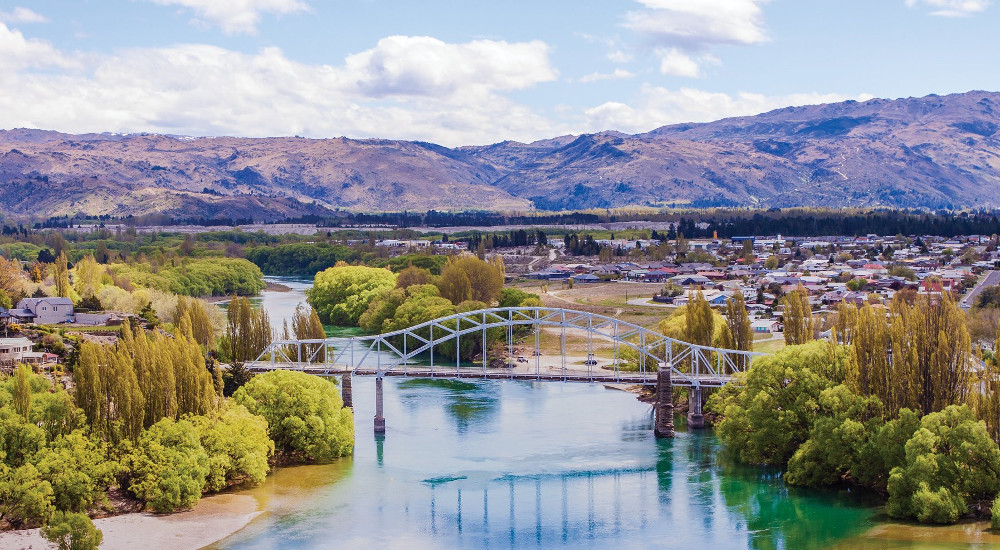 Horseshoe Bend Footbridge is 70.2 metres long, spanning New Zealand’s largest river, and is an impressive footbridge in the country. A common cause of premature death, in the nineteenth and early twentieth centuries was drowning in the fast flowing rivers. With both sides mined the problem was crossing the river. The Horseshoe Bend community had to cross the river by punt or by an arrangement of a chair attached to a manually hauled cable, particularly scary for children attending school at Raes Junction. The footbridge completed in 1913 solved the problem. Although by its completion the permanent population was in rapid decline. The settlement of Rigney has virtually disappeared however the restored (2003) bridge stands as a reminder of the former community at Horseshoe Bend. The remote austere landscape has a footbridge to nowhere.

Lonely Graves are located approximately 1km further down the road from Horseshoe Bend Bridge. The graves are adjacent to the present day carpark. The narrative is William Rigney (prospector) in 1865 found the body of a young man in the river. He buried it here with the headboard inscribed ‘Somebody’s Darling lies buried here’. Upon his death in 1912 he was buried beside ‘Somebody’s Darling’. Horseshoe Bend Bridge and the Lonely Graves both accessed from Clutha Gold Trail and Beaumont Millenium Track. Recommended vehicle access is 4WD especially in winter due to the rutted condition of the road. The road is narrow and not suitable in any weather for motorhomes. 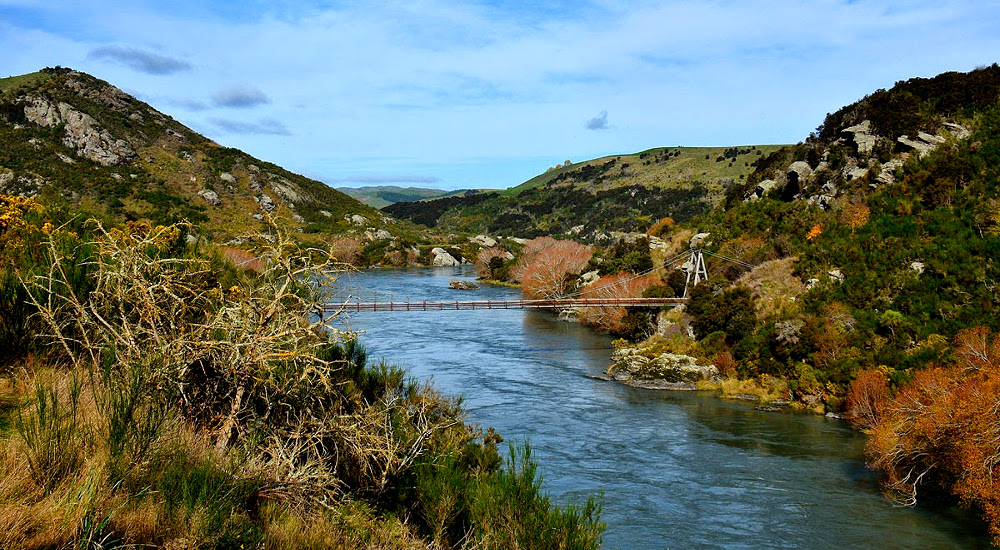 Carricktown tempts visitors to explore with its remoteness, solitude as well as being off the grid as the place to test your 4WD expertise. The town is perched on the Carrick Range behind Bannockburn. The views combined with the ruins of cottages, a stamper battery (image hauling the massive iron monster to its present location in the nineteenth century), dams and rock rubble are testimony to the hardships facing miners. Carricktown Road. Highlights for 4WD visitors include: 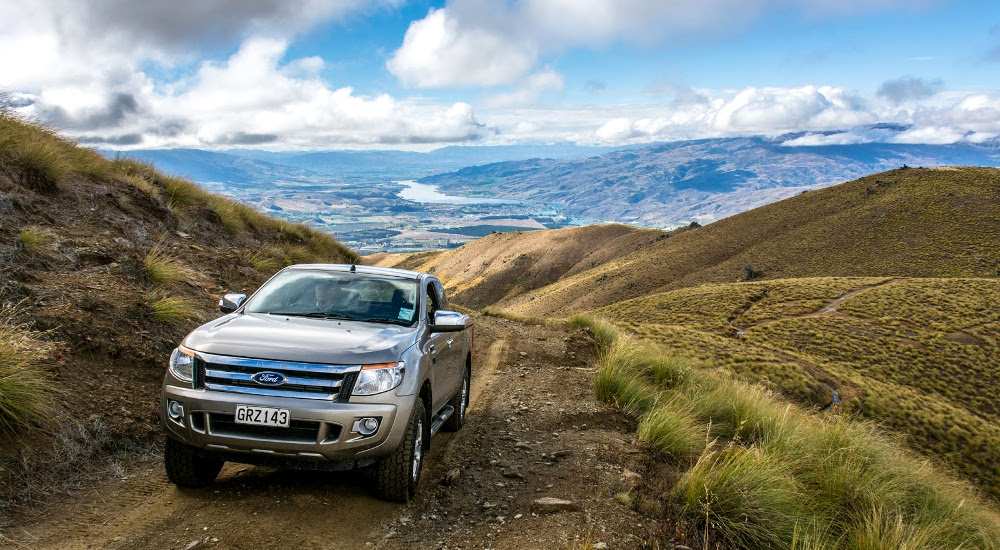 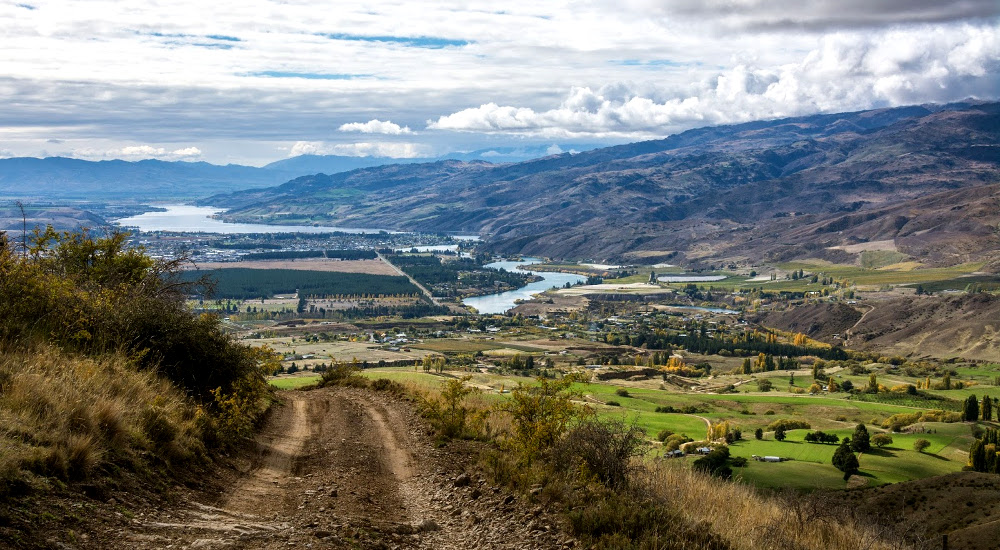 Quartz Reef Tailings, also known as Northburn Tailings is a brisk hill climb approximately 8km from Cromwell. Walkers encounter neat neat and symmetrically stacked rock heaps as miners progressively worked their way up the hill. “Quartz Reef is the most undisturbed example in the region. From the carpark, cross the road and follow the marker poles to the right. This is through private property. At the top of the rise there’s a gate into the historic reserve and the track leads to a viewing platform. 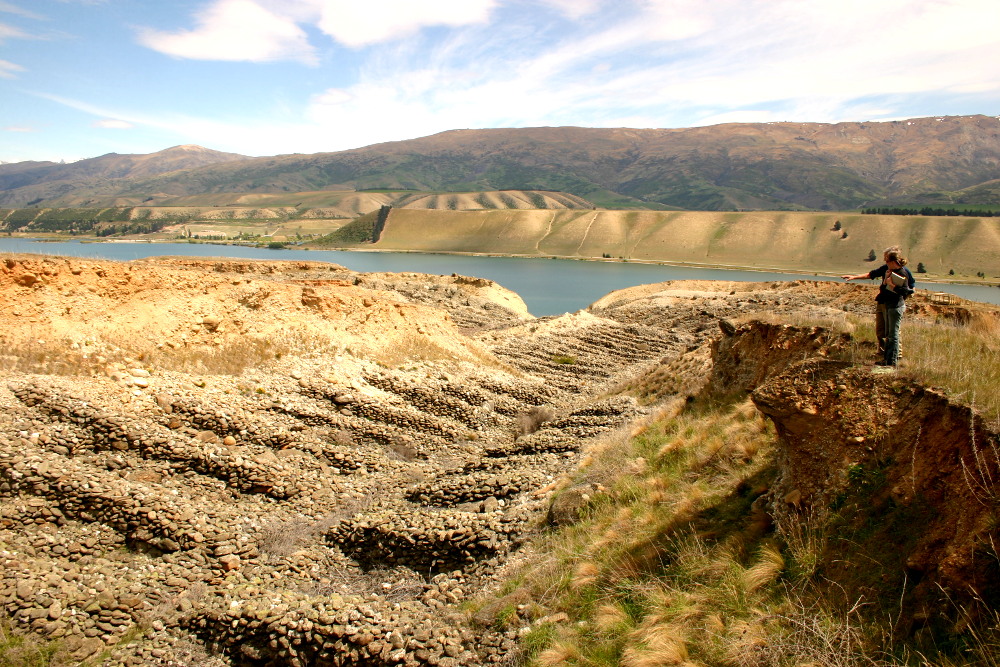 From here there are views of the tailings and over to Lake Dunstan, Cromwell and the Pisa Range. These virtually pristine remains are the result of ground sluicing; channelling water to the head of a claim and flooding the working face. Larger stones and rocks were removed and stacked, row after row in a herringbone pattern. The washed material was then directed or shovelled to a sluice channel to separate the gold from the gravel.For your own safety and the preservation of this remarkable site, do not attempt to walk on the stacked stone tailings. In 1865 there were at least forty miners here but little is known of their success or otherwise. Their legacy is the Quartz Reef, or Northburn Tailings.” Source DOC online resource for gold mining walks near Cromwell.

The Cromwell Museum is the result of volunteers in the 1960’s passion for the history of the area. Originally the focus was the gold mining period, with the discovery of gold in 1863 transforming a small settlement known as The Junction to a busy gold mining town. Chinese miners from Canton also arrived in 1865 establishing a Chinatown on Melmore Terrace that was active from 1870 – 1920. The newly created Lake Dunstan led to a flurry of excavation. Moa bones, middens and the archeological trail of human occupation now sits side by side the story of gold mining in the museum. 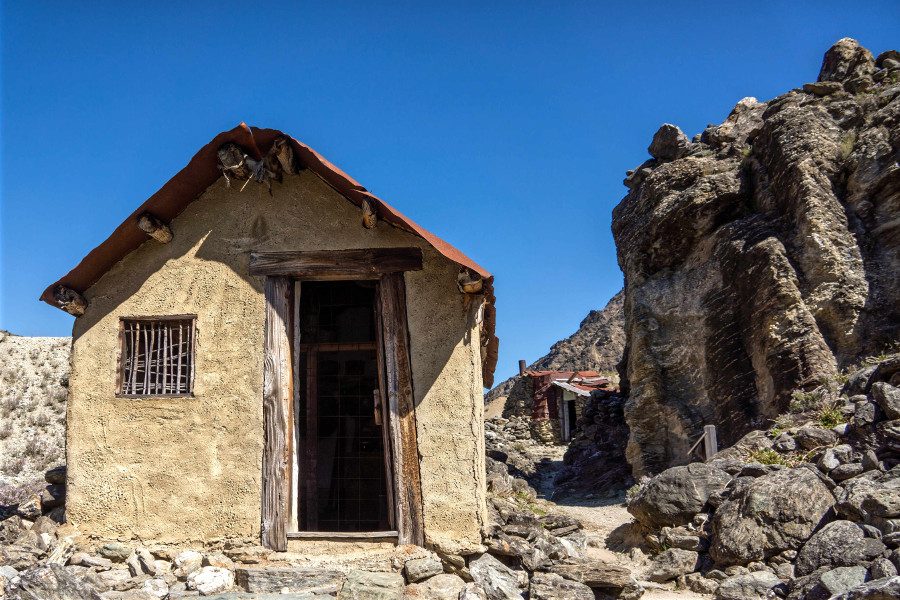 Environmental aspects of mining gold in Otago, Gold in Otago, “Environmental standards of Otago’s pioneering Europeans were low, and mining activity was essentially unconstrained. The scars still remain from this era because revegetation in Central Otago is slow, especially where the thin soil has been sluiced away. Alluvial mining was the main culprit then, as this occurred at the largest scales, in surface gravels. The operations also undoubtedly muddied the waters downstream, although any consequent siltation problems have since been rectified naturally by flooding. Hard-rock mining was on a smaller scale and was mostly underground, so the only visual evidence now is scattered mine waste piles which have largely become overgrown.

The relative visual impacts of alluvial and hard rock mining today are reversed from last century. Alluvial operations, while large, have developed an impressive reputation for land rehabilitation. It is difficult to find where the large alluvial mines have been only one year after closure. In contrast, the Oceana Gold Ltd Macraes mine is characterised by large waste rock piles which dominate the skyline in the mine vicinity, and deep open pits collectively several kilometres long. The waste rock piles will ultimately be grassed over and the relief will soften in time so that they will be less obtrusive, but the skyline will be changed permanently. This is typical of large open cast mines anywhere in the world. The pits may be filled with tailings from the processing plant and be grassed over, or filled with water to become lakes.” Department of Geology, University of Otago

10 family walks to explore near Milton: what to see, best things to do

The Catlins guide to 11 family walks and birding hot spots

What do you think about “9 Cromwell & Bannockburn historical sites worth a wander”?